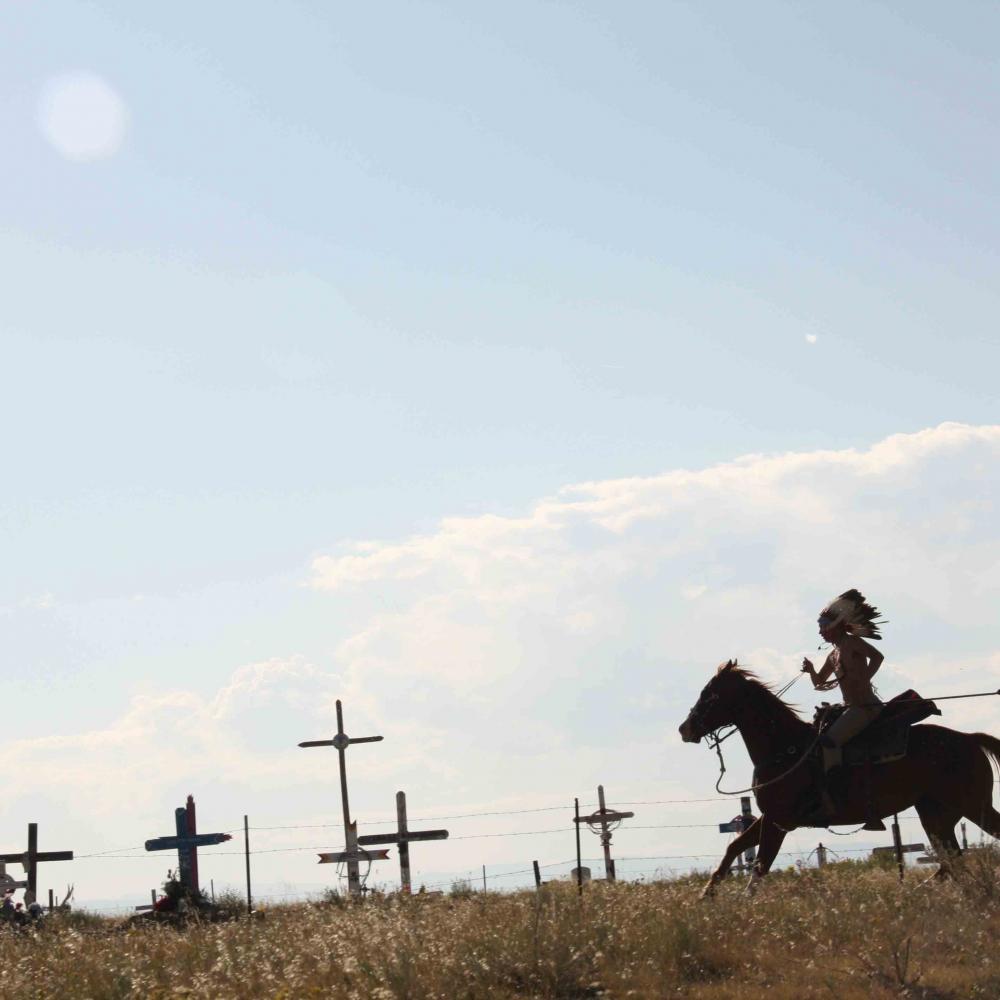 A riderless horse represents Little Plume, the young Northern Arapaho boy who died at Carlisle but whose remains didn’t come home with the others’ remains, in a 2017 ceremony at Sharp Nose Cemetery, Wind River Reservation, Wyoming.

Three lost sons have returned home to the Wind River Reservation—135 years after they made the trek east to Pennsylvania, where they died and were buried. The repatriation of their remains in 2017 and 2018 came about through the efforts of their Northern Arapaho families, efforts detailed in the Wyoming Humanities-supported documentary Home from School: The Children of Carlisle.

Before departing, families signed contracts giving up all parental rights and agreeing that the children would stay at Carlisle until they graduated, or up to five years. School administrators hoped to “civilize” them, while their families hoped the children would learn white ways and bring that knowledge back to help the tribe.

Recruiters had started fanning out across the continent in 1879 to persuade and coerce Native American families to send their children to the first “Indian Residential School,” the flagship institution founded by Captain Richard Henry Pratt. Pratt coined the school’s slogan, “Kill the Indian, save the man.”

The three boys arrived on Friday, March 11, in the midst of a bitter cold winter. They were not allowed to room with others they knew. They were given stiff shoes and confining uniforms to wear, and they were forbidden to speak their own language under penalty of corporal punishment. Their hair was cut. Stripped of their clothes, hair, language, friends, and family, they were given new names. Little Chief became Dickens Nor, Horse became Horace Washington, and Little Plume became Hayes Vanderbilt Friday.

A photograph of Arapaho and Shoshone children was taken as they arrived at the Carlisle Indian Industrial School in March 1881. Little Plume, age nine, is in the back row, farthest left, with Little Chief, age fourteen, next to him. Horse, age eleven, stands in the front row, second from the right.

Half of each day was spent at school and the other half at work and at drill “instructed by the bell and the whistle.” They attended English-speaking meetings on Saturdays, where they would cover topics such as “the evils of the Reservation system or the pauperizing effect of issuing rations to Indians,” wrote one former resident.

From 1879 to its closure in 1918, more than 10,000 boys and girls resided at the Carlisle school. There were more than 100 similar schools, many modeled on Carlisle. European diseases such as tuberculosis, smallpox, measles, and the flu had a devastating impact among the Indian children, and many died. At Carlisle, there are more than 180 children’s graves.

Among the deaths were the three boys from the Wind River Reservation. Little Plume died on April 15, 1882, having been at Carlisle for just over a year. Horse died on June 12, 1882, and Little Chief died on January 22, 1883. All three were buried in the cemetery, and their remains, along with the rest of the cemetery, were relocated in the 1920s because of construction.

“No one ever apologized for taking our kids,” says Yufna Soldier Wolf, the great niece of Little Chief and the great granddaughter of Chief Sharp Nose.

In 2016, tribal members formally petitioned the U.S. Army—the grounds are now part of the Army War College—for the remains of the three boys. This was the culmination of more than ten years of effort by family members. Finally, on August 7, 2017, 15 members of the Northern Arapaho Tribe, from teenagers to elders, traveled from Wyoming to Pennsylvania to witness disinterment by Army Corps of Engineers archaeologists.

Little Chief and Horse were reburied on the Wind River Indian Reservation on August 18, 2017. However, Little Plume’s Carlisle grave contained the remains of two bodies, neither of which were a biological match. It was devastating for the families. “We brought all the youth together and we told them it wasn’t Little Plume,” says Millie Friday, a relative of Little Plume. “We all cried. We went there to bring all of our children home, and now we’re only bringing two.”

As they left the cemetery, Friday says, “I just reached down and touched his headstone and told him, ‘We’re going to come back and get you.’” Instead of a burial, relatives held a ceremony with a riderless horse to symbolize Little Plume. Subsequent research showed Little Plume’s remains were in another grave, and he was finally brought home to Wind River in 2018.

These events are the subject of Home from School: The Children of Carlisle, a documentary by Caldera Productions, produced by the Content Lab LLC. The film is a coproduction with Vision Maker Media and was made possible by support from the Wyoming Humanities Council. The premiere on the Wind River Indian Reservation is in the works for the summer of 2021, followed by a national and international film festival screening tour and a broadcast premiere.

“We wanted to let the voices of the participants tell the story,” says executive producer and director Geoff O’Gara. One of the people featured in the film is Yufna Soldier Wolf, the former director of the Northern Arapaho Tribal Historic Preservation Office and a Fremont County historic preservation commissioner. The youngest of ten children, she had heard stories around the dinner table of the lost boys, and so she made it her mission to bring them home.

“I worked the whole early part of my life just to get the education, get the experience, get the knowledge of excavation and anthropology, and then come back and work for my tribe,” Yufna says. Three elders—Crawford White, Betty Friday, and Yufna’s father, Mark Soldier Wolf—were able to see the boys’ remains returned. Soldier Wolf died in 2018.

The elders, Yufna says, “never had healing in their lives,” “They went from boarding schools to being drafted into the military to coming home and being treated horribly, so they thought it was this life cycle of being treated that way because we’re Native American. That intergenerational trauma is passed down. We’re finally breaking that cycle.”

The boys’ repatriation from the Carlisle cemetery was a watershed. Since then, remains of children from other tribes around the country who died at Carlisle have been returned to their tribes. Jordan Dresser, chair of the Northern Arapaho Business Council and associate producer for the film says, “Yufna paved the way for that to happen.”

This article is available for unedited republication, free of charge, using the following credit: “Originally published as “The Long Journey Home” in the Spring 2021 issue of Humanities magazine, a publication of the National Endowment for the Humanities.” Please notify us at @email if you are republishing it or have any questions. 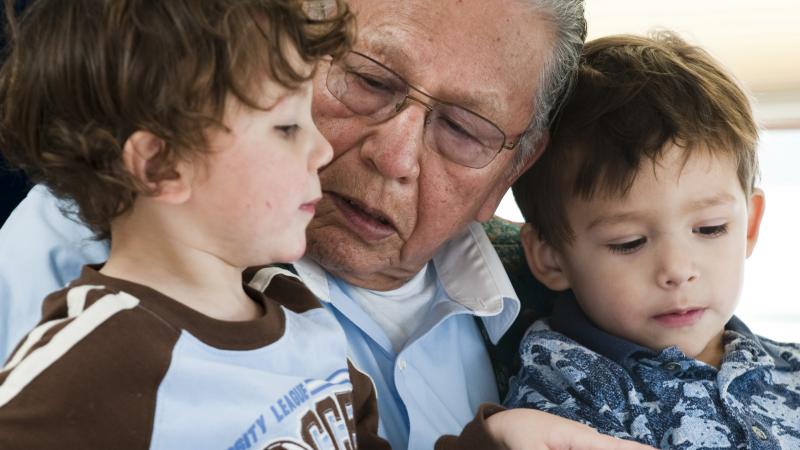 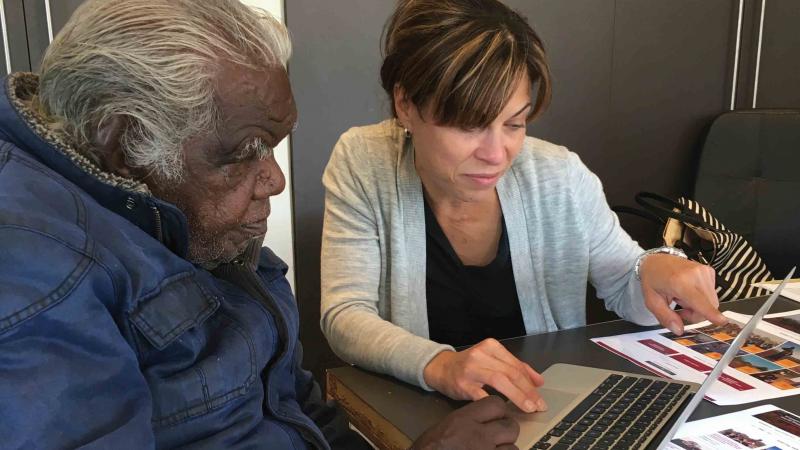 Mukurtu: A Digital Platform That Does More Than Manage Content