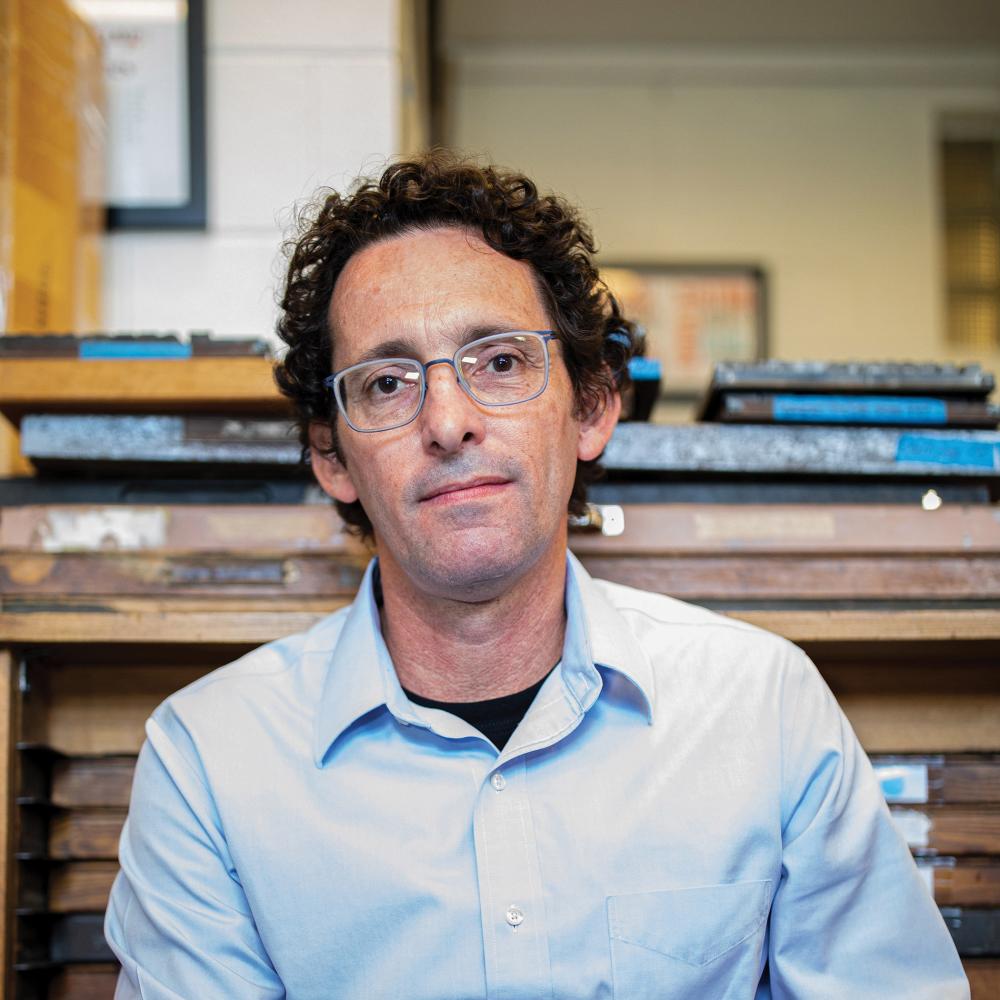 Matthew Gibson in front of cases of type at the Virginia Center for the Book.

Virginia Humanities has new digs: 10,000 square feet of office and meeting space in Dairy Central, a multiuse complex centered on a former milk-processing plant in a vibrant, historically Black neighborhood near downtown Charlottesville.

The move for the first time since 2006 brings staff from the council’s 11 programs together under one roof. Executive Director Matthew Gibson says he envisions an open, collaborative environment with “more energy and vitality moving through the place.”

Gibson, who has headed the council since 2017, has no shortage of either quality himself. “I’ve got a lot of energy,” and, as he admits, “I want a lot of energy.” If there is a thread running through his career, it’s, as he puts it, “a willingness to say yes.”

Gibson was working for the University of Virginia library, putting up digital texts, when he got an offer from Virginia Humanities to start Encyclopedia Virginia, a comprehensive, vigorously fact-checked, online reference of history and culture. He was completing a PhD in English and planning a career as a librarian but was intrigued by the offer.

“It was a chance to sort of run my own shop, to establish a vision and create the vision, create the infrastructure around it.”

Gibson found that he had a passion for nonprofit leadership. He also found that the values that attracted him to library work—a belief in the democratization of information, a repository from which people could create knowledge—were also present in the humanities.

“The humanities world,” he points out, “has got a very similar kind of ethos. We want to engage people; we want to help sharpen people’s critical questions about the world that they live in. We’re not here to answer things, we’re here to provide more questions, or more information so people can ask questions.

“It’s about supporting people in their own efforts to create projects and programs through which they’re preserving and disseminating unique culture, unique narratives, and stories.”

In 2009, Gibson became the council’s director of digital initiatives. Among his accomplishments: creating Google Street Views of historic sites around the commonwealth, including Tangier Island, a community in the middle of the Chesapeake Bay threatened by erosion and rising sea levels. Gibson and a colleague walked the island for around two days, wearing 50-pound backpacks mounted with 15 cameras.

In 2017, Gibson succeeded his mentor, Robert Vaughan, as executive director.

Vaughan left a prodigious legacy. He founded the Virginia council and ran it for 43 years. Under his leadership, Virginia Humanities came to be regarded by many as one of the most successful and influential state humanities councils.

Vaughan always believed, says Gibson, that the work of any nonprofit is focused on justice.

Several new initiatives seek to build on that legacy. The council has started a grant program to support nonresidential fellows at historically Black colleges and universities. The council is also launching a community-produced podcast—the first series is tentatively called The Neighborhood—which provides training in digital storytelling. As with other, existing grant programs, it will focus on telling and amplifying inclusive narratives.

Among the council’s longtime programs are the Virginia Center for the Book (which offers workshops on bookmaking and letterpress and provides literacy resources across the commonwealth), the Virginia Festival of the Book, the Virginia Folklife Program, and radio programming and podcasts.

Gibson is also rethinking the council’s engagement with young people, especially students of color. “The field of the public humanities remains predominantly white,” he notes. Through an expansion to their paid internship program, Gibson hopes to support students interested in storytelling, new media, and cultural preservation and documentation and build a pathway to careers in the humanities, as well as “life opportunities that humanities, storytelling, and stories bring to the world.”

For the past two years Gibson poured the lion’s share of his energy into establishing the site for the new office. Now Virginia Humanities has a “true public humanities center,” Gibson affirms. The former headquarters was on the outskirts of town, inaccessible by public transit.

“It’s about culture. The sort of new culture Virginia Humanities is creating around an important and, I think, vibrant belief system in things like community, things like equity, things like justice. Being here, in a more vibrant, quasi-urban setting where we see these issues playing out, we can help support these conversations about the things that are affecting people’s lives a lot more easily.

“It’s a great place for us to get a better picture of why the work we’re doing is relevant.”

Do you have a favorite getaway spot in Virginia? If I had to choose, I love the Northern Neck. I’m a big oyster fan. Being from Charleston (S.C.), it reminds me of home. It’s where I find peace and quiet. Where do you find adventure? I love mountain biking and the mountains around here. I like to go downhill, fast.

This article is available for unedited republication, free of charge, using the following credit: “Originally published as “Executive Function with Virginia's Matthew Gibson” in the Summer 2021 issue of Humanities magazine, a publication of the National Endowment for the Humanities.” Please notify us at @email if you are republishing it or have any questions. 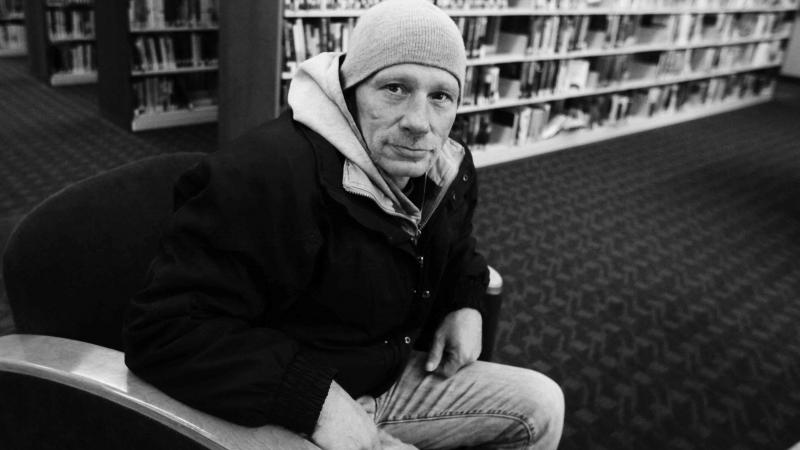 The Complicated Role of the Modern Public Library