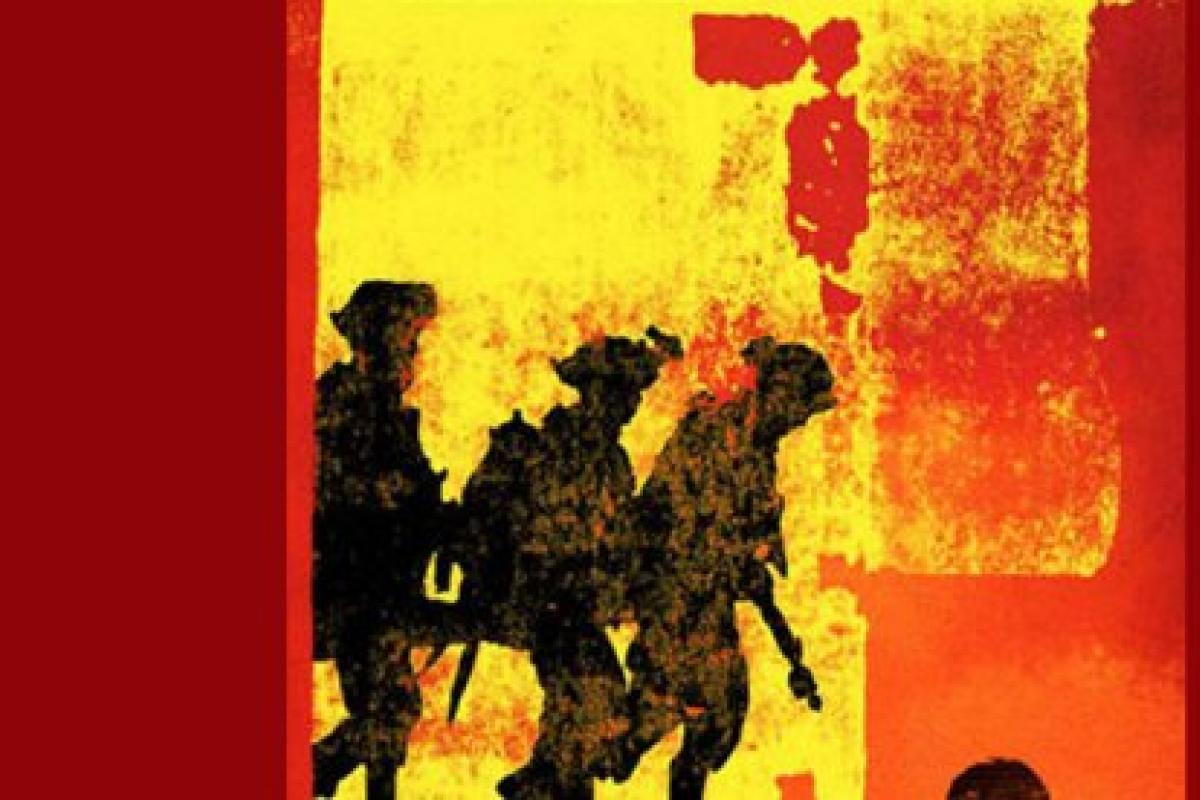 Proud to Be: Writings by American Warriors, Volume 2.

Courtesy of the Missouri Humanities Council

This feature is the third in a series of articles that explore the results of NEH grants across the agency’s divisions and offices. The series will provide an in-depth look at NEH projects that cover a particular discipline, culture, or historical period, or that involve new technologies or methods that advance education, research, preservation, and public programming in the humanities.

Recently the NEH launched an agency-wide initiative, Standing Together: The Humanities and the Experience of War, to encourage and support humanities programs that focus on the history, experience and meaning of war and military service. Five pilot projects recently received grants to engage scholars, veterans, and communities in discussions about war and its impact through public programs and advanced research in the humanities.  In connection with the inauguration of the Standing Togetherinitiative, this article highlights three current NEH-funded projects that contemplate the experience and the realities of war.  The first program provides the opportunity for American veterans to explore their experiences through creative writing. In the next project, we are given access to a trove of historic photographs that capture uniquely American experiences during World War II.  The final project excavates and recreates the experiences of soldiers and sailors who served on “Old Ironsides” during the War of 1812.

Proud to Be: Writing By American Warriors

They come to tell their stories. The ones they know are hidden inside them. The ones they do not reveal because they will be too painful. The stories they won’t tell their families or friends because they fear they will be unfairly judged. Some paint poetic portraits of a world where beauty and love reign. They seek hope, acceptance and understanding. Some write to save their lives. – Deborah Marshall, Missouri Warrior Writers Project/Warriors Arts Alliance

The experience of war can be raw and deeply personal – an experience not easily shared with those on the outside, those who have not experienced the heat of battle or suffered through long separations from family and friends. The Missouri Humanities Council has worked to create a bridge between veterans and their communities by providing an arena to share veterans’ stories and their experience of war through a series of creative writing workshops.

In 2011, the Missouri Humanities Council partnered with the Missouri Writers’ Guild and the Veterans Affairs Medical facility at Jefferson Barracks in St. Louis to develop a pilot project for a series of creative writing workshops for veterans. Over the course of twelve sessions, workshop leaders and mentors addressed topics like poetry, journaling, fiction, and non-fiction writing with 56 participants. The initial series was a resounding success, receiving positive feedback from the veteran participants as well as the VA Staff and doctors at Jefferson Barracks, where the workshops were held. More workshops were planned and a spin-off organization was formed - the Warriors Arts Alliance - to support the program growth and focus on helping veterans, their families, and the community communicate using both literary and visual arts.

Impressed by the quality of work produced from the workshops, Geoff Giglierano, executive director of the Missouri Humanities Council, and Deborah Marshall, founder of the Warriors Arts Alliance, also worked to produce an anthology of writings by veterans and active military personnel. On November 1, 2012, Proud to Be: Writing By American Warriors was released by Southeast Missouri State University Press, in partnership with the Missouri Humanities Council and the Warrior Arts Alliance. Proud to Becontains essays, stories, poems, and photographs from 61 active duty military personnel, veterans, and families of veterans from across the nation.

The Proud to Be anthology proved to be so popular that a second volume was released the following year on November 15, 2013, and a third volume is currently in production. Proceeds from the sales of these anthologies help fund more veterans’ writing workshops. For more information on any of the Proud to Be anthologies or creative writing workshops for veterans, visit www.mohumanities.org.

Between 1935 and 1945, unit photographers working for the Farm Security Administration—Office of War Information (FSA-OWI), documented life in America during the Great Depression and World War II. The archive of photographs, known as The File, captures singular, even iconic, moments in the American experience during World War II.

Yale University’s Photogrammar Project is a web-based open-source project using the FSA-OWI photo archive. The archive, digitized by the Library of Congress, contains 170,000 images that are freely accessible to the public through an innovative platform that features interactive maps and visualizations.  Users can navigate the photo collection by state and county maps that are enhanced by historical county and census data.  A second map uses dots to track each of the FSA-OWI photographers--including, among others, Dorothea Lange, Walker Evans, and Arthur Rothstein--as they traveled the country.  From this map, researchers can limit photographs to a specific photographer or use a sliding timeline to explore photos in a specific year. Visitors to the website may also examine photos grouped by subject, as well as search the archive via a traditional search page.

The Photogrammar Project encourages people to engage in new ways of seeing and understanding the distinctly American experience in the years leading up to and during World War II. Visitors to Photogrammar can view photos that document a wide and varied scope of military and civilian activities: bayonet drills at Ft. Belvoir, Virginia; B-17 Flying Fortresses at the Boeing aircraft plant in Seattle, Washington; Women's Army Auxiliary Corps officers from Minnesota and Iowa; infantry soldiers practicing jujitsu at Fort Bragg, North Carolina;  a Food for Victory meeting in rural North Dakota; sugar rationing in Detroit, Michigan; U.S.O. dances in Washington, DC; and soldiers on leave at an amusement park in Alabama and at home in Baltimore, Maryland.  The archive is a valuable collection that illustrates that the war was an experience shared by all Americans.

As a recipient of NEH funding, the USS Constitution Museum of Boston, Massachusetts was able to endow two positions--a research historian and a manager of academic and family programs at the museum--to enhance the interpretive experience at the museum. The museum interprets the history of the War of the 1812-era warship USS Constitution, and the sailors and Marines that manned the ship’s decks. (Constitution, dubbed “Old Ironsides” for her sturdiness under fire, remains a commissioned US Navy vessel to this day.)  Knowing how important careful research is for understanding the realities of past people’s lives, museum staff have worked to excavate the stories of Constitution veterans from available archival and published sources and to make them available to the thousands of people who visit the warship (funded through a federal appropriation) and the museum (a private, nonprofit educational organization that receives no appropriated funds from federal, state, or local government sources).

After a decade of research, the museum has pieced together details from the lives of a number of men that served on the Constitution.  One of them, an Irish immigrant named Francis Mullen, joined the Marine Corps in 1809 and was assigned to Constitution in 1812, a week before the United States declared war on Great Britain. As a Marine, Mullen would not have worked in the ship’s rigging, hauling sails as ordinary seamen did, though as “seagoing soldiers,” Marines sometimes were ordered aloft to pick off enemy sailors with muskets.  (Marines also served as sentries or on gun crews.) It was as a sharpshooter in the mizzen top that Mullen fought when Constitution met and defeated HMS Guerriere off the coast of Nova Scotia in August 1812. Despite sustaining an ugly leg wound in the heat of the fight, Mullen continued on Constitution to the end of 1812, and then was transferred to USS President. But the immigrant Marine continued to be plagued by complications stemming from his injury, forcing him to leave the Marine Corps in 1813.  His disability eventually won him a monthly pension of three dollars.

Sailor Philip Brimblecom’s story ends on a far more tragic note. Brimblecom was twice captured by the British, and had his arm shot off in the Constitution’s fight with HMS Java off Brazil. The injury ended his career as a sailor, and made life after leaving the navy exceedingly difficult. At first Brimblecom found work at the Charlestown and Portsmouth navy yards, but failing health soon forced him and his dependent mother to live solely off his modest military pension. Sadly, Brimblecom only lived to the age of 38.

Perhaps the most interesting story museum researchers have discovered is that of David Debias, a freeborn African American man from Boston’s Beacon Hill neighborhood. Debias was only eight years old when his father signed him over to the Constitution’s crew to work as a “boy,” the lowest rank aboard ship. Many boys, Debias included, acted as officers’ servants. When the Constitution captured the British ships Levant and Cyane, Debias and the officer he served were transferred to the Levant as part of the prize crew tasked with sailing it to a safe port. But the British soon recaptured the Levant, and Debias found himself in a Barbados prison.

After the war, Debias worked as a merchant seaman, then returned for a second stint on the Constitution. Years later, after leaving Old Ironsides a second time, Debias found himself imprisoned in Winchester, Mississippi, as a runaway slave. He appealed, through his lawyer, to the Secretary of the Navy for proof of his military service as a way to refute claims he was a slave. But that is where Debias’s trail grows cold. Even today, we still don’t know if he won his freedom from the Mississippi slave catchers: perhaps continued research can uncover new clues regarding David Debias’s fate. 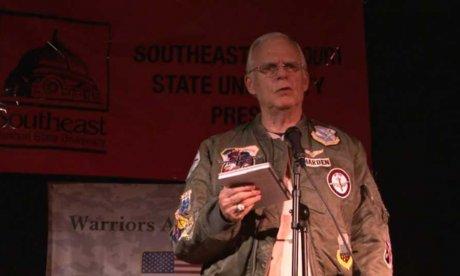 Jay Harden reads his work at the “Proud to Be” reading in St. Louis.

Courtesy of the Missouri Humanities Council

A Federal/State Partnership Grant supports the Proud To Be program through the Missouri Humanities Council. The Photogrammar Project is funded by a 2011 Digital Humanities Start-Up Grant awarded by the Office of Digital Humanities. In 2012, the USS Constitution Museum received funds through the Division of Challenge Grants. In addition to the Challenge Grant, the USS Constitution Museum was the recipient of a 2003 Consultation Grant, a 2004 Planning Grant, and a 2007 Museums Implementation Grant from the Division of Public Programs. A Division of Education Programs grant funded two one-week workshops for school teachers on the War of 1812 and the USS Constitution organized and hosted by the museum.