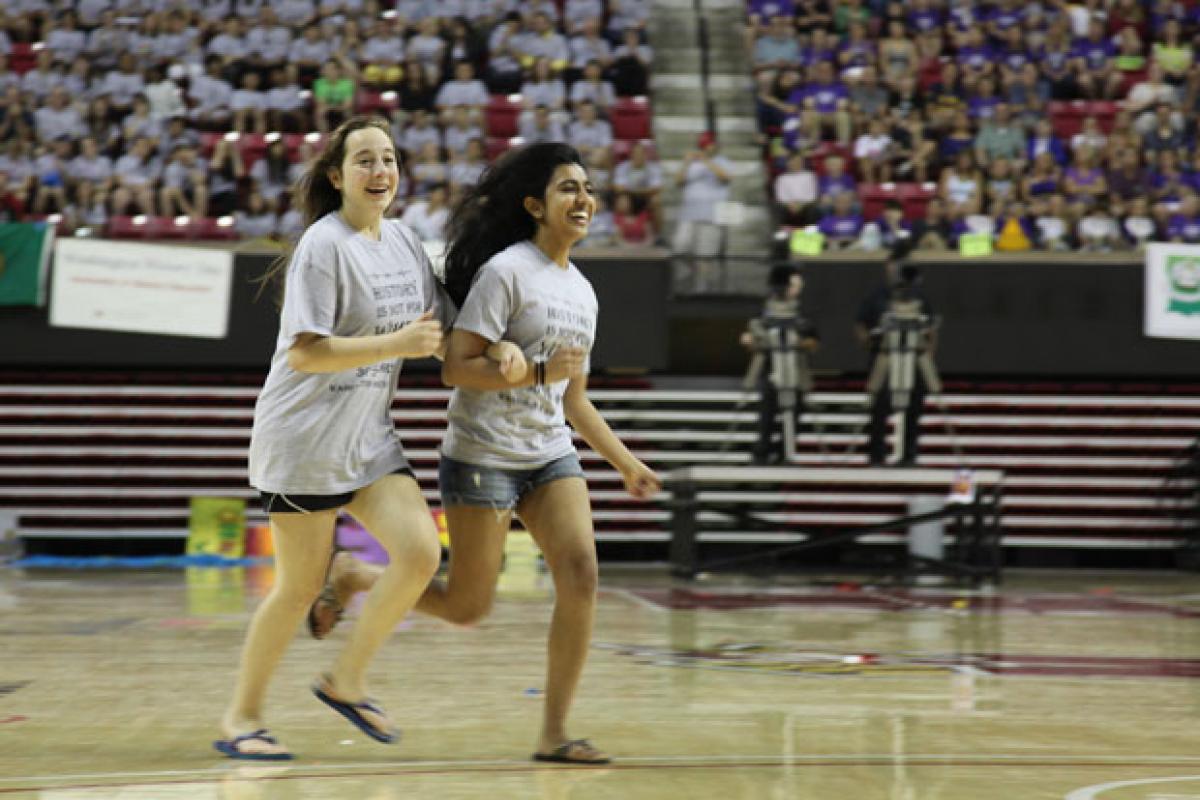 NEH Scholars Rachel Roberts and Aishwarya Nirmal run to receive their award for their project on Gideon v. Wainwright at the 2012 National History Day. 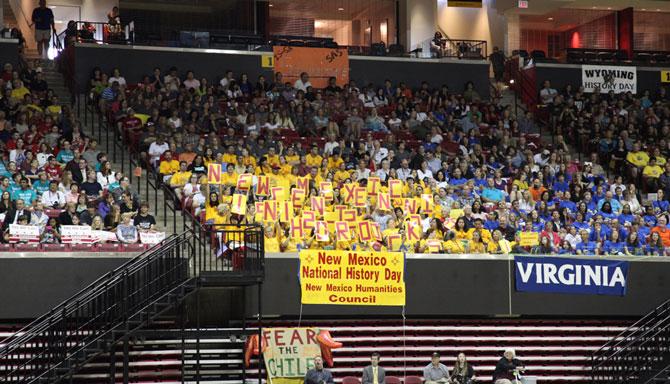 Students from Florida and Washington State took home four of the top senior prizes sponsored by the National Endowment for the Humanities yesterday as 2,800 budding  historians—and their teachers— jammed the Comcast Center basketball arena in College Park, Maryland for National History Day.

This annual event is the culmination of a year-long academic program in which students in grades 6-12 conduct original historical research for papers, exhibits, websites, documentaries, and public performances.

This year, more than half a million kids submitted entries on the theme of “Revolution, Reaction, Reform in History” in local, regional, and state competitions for a chance to earn a spot at the national finals, held each year at the University of Maryland.

Cathy Gorn, the Executive Director of National History Day, presided over the throngs of teenagers drawn from all 50 states, US territories, and international schools across the world, who arrived colorfully dressed in costumes representing their region and T-shirts bearing slogans such as “History is not for Wimps.”

“Studying history is a critical part of having a life that is enjoyable. It is also a critical part of being able to empathize with others—it’s how you put yourself in the shoes of someone else of a different time, or who lives in a different part of the world,” Chairman Leach told the students. “We ought to make ‘Happy History Day’ the motto of every greeting, everywhere in America, every day.”  A webcast of the 2012 National History Day awards ceremony is archived online.

The following students were named National Endowment for the Humanities Scholars at the 2012 National History Day ceremony, with awards presented by NEH Chairman Leach (Students in grades 6-8 compete in the “junior” division; those in grades 9-12 in the “senior” division):

Senior Individual Exhibit:
Nicholas Gupta of Pensacola High School, Florida
Project: “Out of the Closets and Into the Streets: The Stonewall Uprising of 1969”

Junior Paper:
Aarushi Shah from Mead Junior High in Elk Grove Village, Illinois
Project: “All of Africa Will Be Free Before We Can Get a Lousy Cup of Coffee”

Senior Paper:
Sarah Sadlier from the Charles Wright Academy in Tacoma, Washington
Project: “Prelude to the American Revolution? The War of Regulation:  A Revolutionary Reaction for Reform”

Senior Individual Web Site:
Lisa Xie from University High in Irvine, California
Project: “Jacob Riis and the Other Half”

The HISTORY Channel sponsored prizes for Senior Group Documentary and Senior Individual Documentary.  Winners in other categories received prizes from a host of other sponsors. A list of all 2012 National History Day finalists and winners is available at: http://www.nhd.org/

Recognized by Dr. Gorn as “History Day’s best friend,” the National Endowment for the Humanities has been a supporter of National History Day since the program began in 1965. NEH grants were instrumental in helping National History Day grow from a pilot start-up project in Ohio into a national program that was honored in February at the White House with a National Humanities Medal.

At the awards ceremony, Chairman Leach announced that the National Endowment for the Humanities would create a new category of National History Day prizes for students who incorporate research using Chronicling America, the free online database of 5 million pages of historic US newspapers dating from 1836 to 1922, digitized through a partnership between NEH and the Library of Congress. To assist young researchers, EDSITEment, NEH’s educational website, will also develop a new set of online resources around Chronicling America to help facilitate and encourage use of the newspaper material among students and educators.