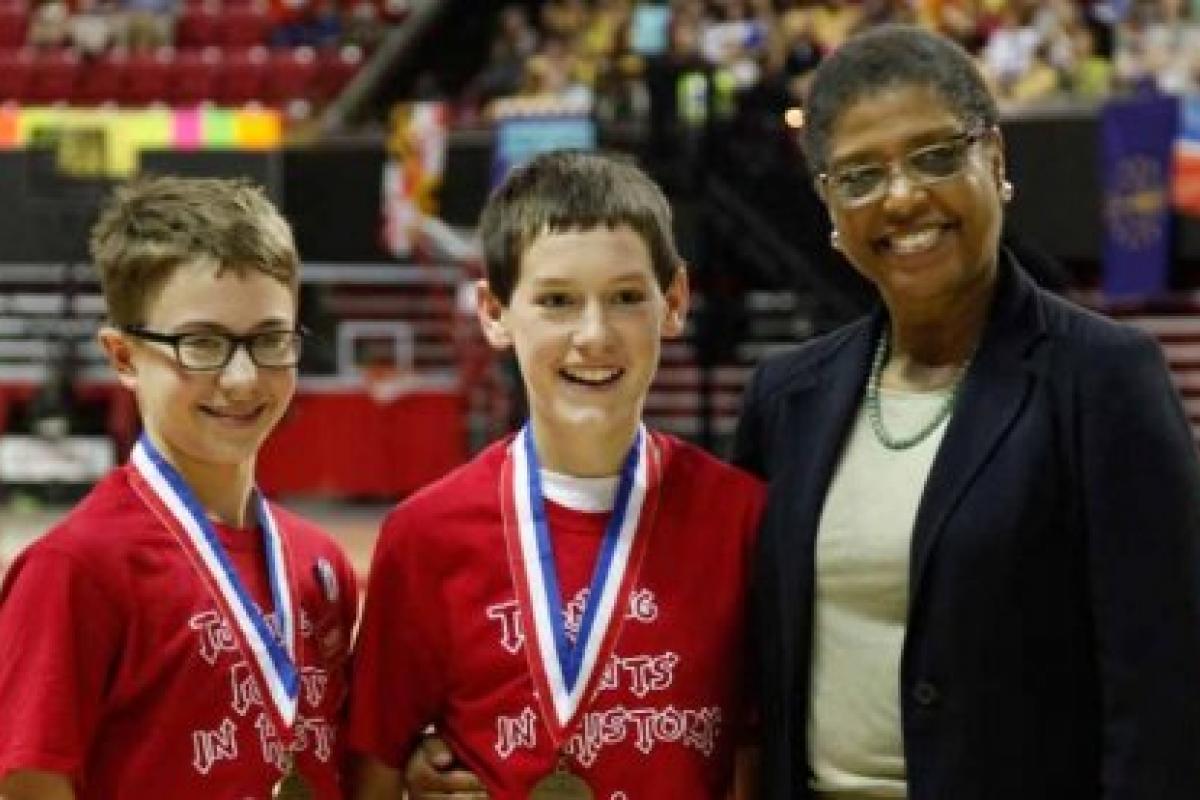 Two students from North Carolina and Kentucky were recognized by the National Endowment for the Humanities (NEH) for their impressive use of historic newspapers in projects presented at National History Day, a nationwide competition for middle and high school students that concluded yesterday with an awards ceremony at the University of Maryland, College Park.

This annual event is the culmination of a year-long academic program in which students in grades 6-12 conduct original historical research for papers, exhibits, websites, documentaries, and public performances. Each year more than 600,000 students compete in local, regional and state competitions for a chance to win a spot at the national finals.

The National Endowment for the Humanities has been a supporter of National History Day since the program began in 1965. NEH grants were instrumental in helping National History Day grow from a pilot start-up project in Ohio into a national program that now operates in all 50 states, the District of Columbia, U.S. territories and in international schools in China, Korea and South Asia.

This year for the first time the National Endowment for the Humanities awarded prizes to students who incorporated into their projects research using Chronicling America, the free online database of 5 million pages of historic US newspapers dating from 1836 to 1922, digitized through a partnership between NEH and the Library of Congress.  To accompany the new prize category, EDSITEment, NEH’s educational website, also created a set of online resources around Chronicling America to assist students and educators in using the newspapers in historical research.

Responding to this year’s National History Day theme of “Turning Points in History: People, Ideas, Events”  Richard Hernasy from St. Dominic Savio Home School in Mills River, North Carolina received the Chronicling America prize for his documentary  “Unexpected Verdict: The Trial of John Peter Zenger” in the junior category, and Joanna Slusarewicz from the Paul Laurence Dunbar High School in Lexington, Kentucky took the prize in the senior category for her documentary “It’s a Jungle Out There: Upton Sinclair Turns the Tables on the Chicago Meatpackers and the Food Industry.”

In addition to the Chronicling America prize, NEH Acting Chairman Carole Watson presented sixteen National History Day awards sponsored by NEH for first place submissions across a range of categories.  The following students were named National Endowment for the Humanities Scholars at the 2013 National History Day ceremony. (Students in grades 6-8 compete in the “junior” division; those in grades 9-12 in the “senior” division.)

Junior Group Exhibit:
Tyler Pensyl, Emily Burch, Abbie Boyer, Meredith Ache from the Kutztown Area Middle School in Kutztown, Pennsylvania
Project: “The Idea of a Conquerable West: The Maps of Lewis and Clark As a Turning Point in Westward Expansion”

Senior Group Exhibit:
Trinity Hamm, Spencer Miller and Emily Reiss from Kutztown Area High School in Kutztown, Pennsylvania
Project: “’Adding More Oil to the Anti-War Fire’: The Impact of the Tet Offensive Within and Beyond the Vietnam War”

Junior Individual Documentary:
Rachel Priebe from Amelia Earhart Middle School in Riverside, California
Project: “’Kill the Indian, and Save the Man’: A Turn for the Better or Worse?”

Senior Individual Website:
John Vodrey from Shaker Heights High School in Shaker Heights, Ohio
Project: “On the Brink of Disunion: The Election of 1860”

The HISTORY Channel sponsored prizes for Senior Group Documentary and Senior Individual Documentary. Winners in other categories received prizes from a host of other sponsors. A list of all 2013 National History Day finalists and winners is available at: http://www.nhd.org/