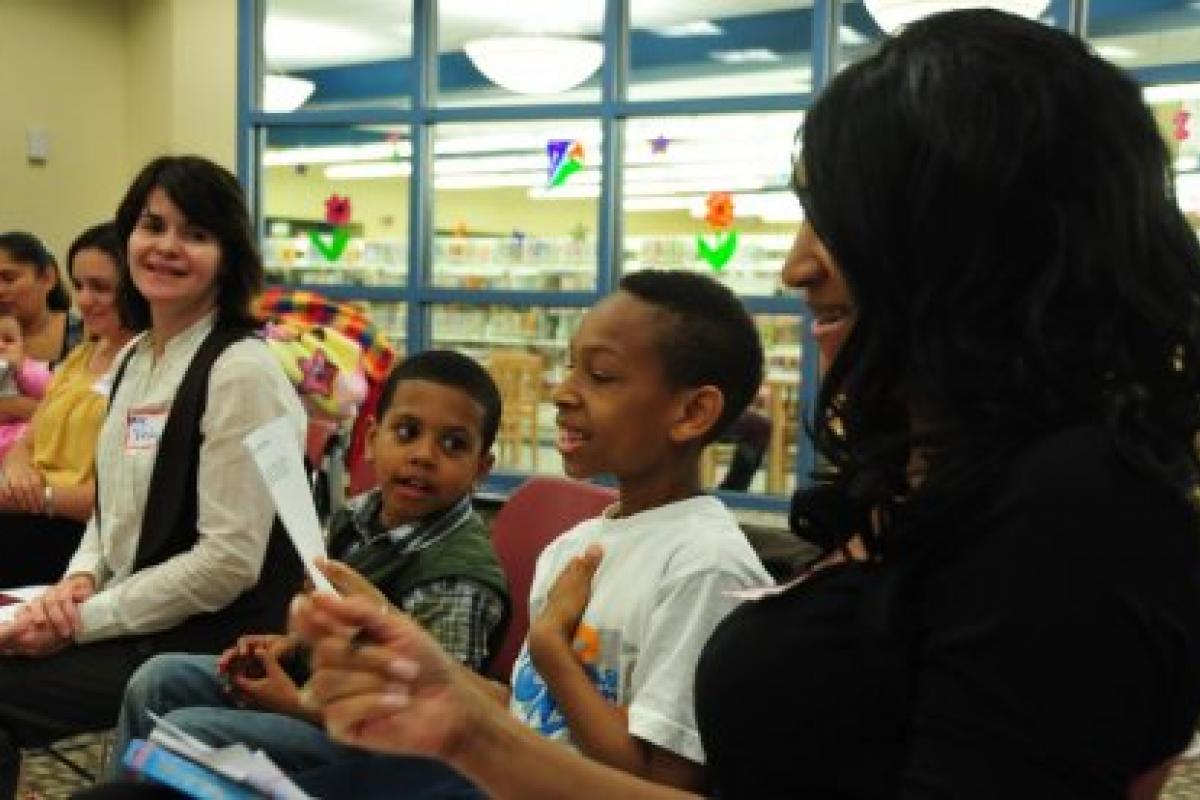 New York Council for the Humanities

This feature is the second in a series of articles that explore the results of NEH grants across the agency’s divisions and offices. The series will provide an in-depth look at NEH projects that cover a particular discipline, culture, or historical period, or that involve new technologies or methods that advance education, research, and public programming in the humanities.

The Latino experience is one of varied cultures coming together with a flavor and flair all its own. This article explores the role that NEH funding plays in supporting the Latino experience through history, culture, and language.  First, we feature a reading and discussion program from the New York Council for the Humanities. Next, we explore how the New York State Archives highlights the local Latino experience in its archival collections. Then, we turn to a researcher who has uncovered one Iowa community’s response to the changes immigration brought to their town. Finally, we visit a summer workshop that brought schoolteachers from around the country to the San Francisco Bay area for a new perspective on Spanish, Mexican, and American history spanning over three centuries.

Unidos: A reading and discussion program for bilingual families

Talking to others about what you’ve read seems like a simple thing to do. However, it is one of the most powerful and effective ways to broaden horizons, engage with others of different perspectives, and increase cultural awareness beyond our personal communities. Active reading, employed in reading and discussion programs, is part of the programmatic core offered by state humanities councils. These programs urge participants to take the time to think deeply about one topic, engage with others, and encounter new perspectives.

Reading and discussion programs are typically offered only in English, yet the number of bilingual households in the US is on the rise. The 2012 American Community survey estimates that approximately 21% of the population of the United States speaks a language other than English in the home; of that 21%, 13% are Spanish speakers. The New York Council for the Humanities, one of 56 state humanities councils supported through NEH’s office of Federal/State Partnership, seeks to reach out to this population and introduce them to humanities content through a bilingual reading and discussion program for adults and their children, Unidos-- Charlas de libros para niños y padres. A bilingual reading and discussion program is a natural fit for the New York Humanities Council. The state as a whole is a hub for immigration. According to the 2010 census, 21% of New Yorkers are foreign-born – 10% higher than the national average.

Unidos launched in 2009 and was built from the existing framework of the council’s popular Together—Book Talk for Parents and Kids. The Council enlisted the help of biliteracy expert Andrea Garcia of Hofstra University to expand the program to include bilingual participants. Unidos allows parents and their 9-to-11-year-old children to come together at their local library and use their bilingualism as a tool to increase engagement not only between family members, but also with their community at large. Participants in Unidos attend six 90-minute sessions, co-facilitated in English and Spanish by a librarian and a local humanities scholar. These sessions highlight picture books and novels in both languages that focus on key themes in American life, such as courage and freedom. Participants are welcome to speak in either English or Spanish; all voices are valued in these discussions of critical issues related to everyday life.

Since the program’s launch in 2009, Unidos has reached 100 families, giving them the tools to read together at home, in spite of any language barriers.

“[What I like most about the book discussions is that] everyone has a different opinion and we all come from different walks of life; we tie in our personal experiences and compare them to what’s happening in the story” - Parent, Fort Washington Branch Library

Ventana al Pasado brings together collections from eleven repositories around the state, including the Centro de Estudios Puertorriqueños, Cornell University’s Kheel Center for Labor-Management, the Dominican Studies Institute, and the Rochester Museum and Science Center. These collections can be searched through the online catalogue as well as browsed by collection or topics, including Family and Community Life, Occupation and Labor, and Organizations and Leaders.

A particularly interesting subset of the collection is a number of interviews with Latino immigrants conducted in 1936 as part of the Works Progress Administration (WPA) Federal Writers’ Project. In Case History #13, reporter José Pastrana recounts the life story of a man born in Buenaventura, Colombia who immigrated to New York by way of Panama and married a Hungarian immigrant. Responding to a series of questions prepared by the WPA, the interviewee discusses why he came to the United States, his career in New York City, and family life, including how his daughters, who were initially raised in what he called an “American” neighborhood and did not learn Spanish, had to transition to a largely Latino community in Harlem.

These personal histories, along with documents from cultural organizations and photographs of everyday life and prominent Hispanics in arts and politics, help to represent the Latino experience in New York and the United States as a whole.

Little Salsa on the Prairie: Uncovering big changes in a small town

In the 1960s, many residents of Perry, Iowa, worked at the local meatpacking plant. Thirty years later, changes in the industry transformed the workforce, and Latino workers moved to the Midwest with their families from California, Texas, Mexico, and Central America to take jobs at the plant. In 1990, 1 percent of the town’s population identified themselves as Latino, but by 2000, that figure climbed to 24.5 percent. Perry is not unique: similar demographic shifts occurred in communities throughout Iowa and the Midwest.

Dr. Jody Swilky, the Ellis and Nelle Levitt Professor of English at Drake University, received a 2013 Summer Stipend grant from the Division of Research Programs to prepare the companion book to his award-winning documentary A Little Salsa on the Prairie: the Changing Character of Perry, Iowa (Full Spectrum Productions, view a short clip of the documentary here). Through personal interviews, Dr. Swilky uncovered the individual stories of both new and longtime residents and documented their complex reactions to the rapid changes in their lives. Simultaneously, he uncovered how the community of Perry negotiated the conflicts and expectations that dominate public policy debates and media headlines and re-envisioned itself as a city celebrating its newfound diversity.

Swilky began his research in the early 2000s. With his Summer Stipend, Swilky returned to Perry to conduct follow-up interviews and investigate the longer-term effects of the town’s initiatives. While there, he learned that Perry’s Latino citizens had found opportunities for work beyond the meatpacking plant. As a result, the meatpacking plant had welcomed new additions to its workforce: refugees from Asia, Africa, and the Mideast. The community’s previous response to the Latino culture is now informing its dialogue with its newest residents. Swilky is incorporating this new development into both his book and his classroom, creating a new course that will give students hands-on experience with the interdisciplinary research methods he employed in his study of this quietly revolutionary Iowa town. He anticipates completing his book by the summer of 2014.

“While immigrants’ stories about culture change, assimilation, and the future frequently reflect the thinking that informs public debate, these narratives simultaneously speak about experiences and identity in ways that complicate and challenge the way public debate has defined the effects of immigration. Thus, in our attempts to understand the meaningful possibilities for reform, we need to look not only at the thinking that informs public debate and produces legislation, but to the culture change in communities and the stories their residents tell of the specific effects immigration has had on the quality of life—for themselves and other residents of the community.” – Dr. Jody Swilky

In 1776, a few months before the Declaration of Independence was signed in Philadelphia, 16-year-old Luís Peralta came to California as part of the historic Anza expedition. For his service to the Spanish empire, he was ultimately granted 45,000 acres around the San Francisco Bay (estimated to be the most valuable Spanish land grant ever made in California) – an area that includes seven present-day cities, including Oakland and Berkeley. During two one-week Landmarks of American History and Culture workshops, supported by the Division of Education Programs in summer 2012, eighty school teachers came from across the U.S. to Peralta Hacienda Historical Park, in Oakland’s predominantly Latino community of Fruitvale – and left with a new understanding of American history. “The Peralta site was the perfect way to frame the lessons we learned,” said one participant, by “putting a human face to the history”: “seeing how an actual family was affected over the past several hundred years brought it all to life.”

Workshop co-directors Holly Alonso, executive director of Peralta Hacienda, and Alex Saragoza, professor of Chicano/Latino studies at University of California, Berkeley, led teachers through a week of interdisciplinary exploration that placed the family and local stories of Peralta Hacienda into the larger narratives of American, Spanish, and Mexican history over three centuries. In addition to studying the nineteenth-century Peralta family home and earlier archaeological record, participants visited the San Francisco Presidio and Mission Dolores to learn about encounters between Spanish colonists and Native Americans; discovered histories of immigration and change on a walking tour of the Fruitvale neighborhood; and heard Pablo and Juana Ceja tell their family story, rising from his work as a humble bracero (legal guest farmworker) to their present success as Napa Valley vineyard owners. Teachers read both primary sources and secondary scholarship, and responded with excitement to lectures and discussions with top-notch scholars, artists, and filmmakers: “I had never been in a room with such great minds.”

Back in their home communities, teachers have brought their NEH workshop experiences into a wide variety of grade levels, subjects, and settings. Fourth-grade teacher Diane Wang has used curriculum-based hands-on activities to convey early Mexican American history vividly to younger students: roping a life-size longhorn model engages them with the ranch culture that brought words like lariat and buckaroo into the U.S. lexicon from Spanish. And for Oakland high school teacher Alfredo Mathew, Holly Alonso reports that “knowledge of this deep layer of Hispanic-U.S. history transforms his Latino students, giving them a sense of their own importance in this country’s development and of their own history on the world stage.”

“This workshop changed my whole perspective on how I should teach American History.”

“The connections I made to my own heritage and that of my students gives me a perspective that I hadn't had. … The personal accounts of the people we met on the field trips were moving, meaningful and provocative.” 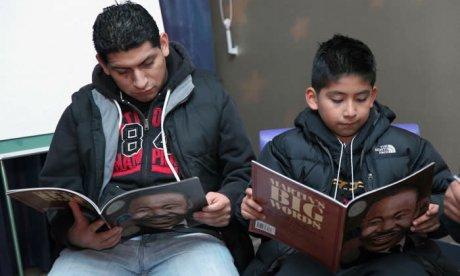 New York Council for the Humanities

The Unidos bilingual reading and discussion program was supported by a We The People initiative grant in 2009 to the New York Humanities Council. The Ventana al Pasado web portal was created with funding from a 2005 NEH Preservation & Access grant to the New York State Education Department. A 2013 summer stipend from NEH’s Division of Research to Dr. Jody Swilky of Drake University supported research for the companion book to the documentary A Little Salsa on the Prairie: the Changing Character of Perry, Iowa. The 2012 summer workshops on Spanish, Mexican, and American California at the Peralta Hacienda Historical Park were supported by an NEH Landmarks of American History and Culture Education grant.