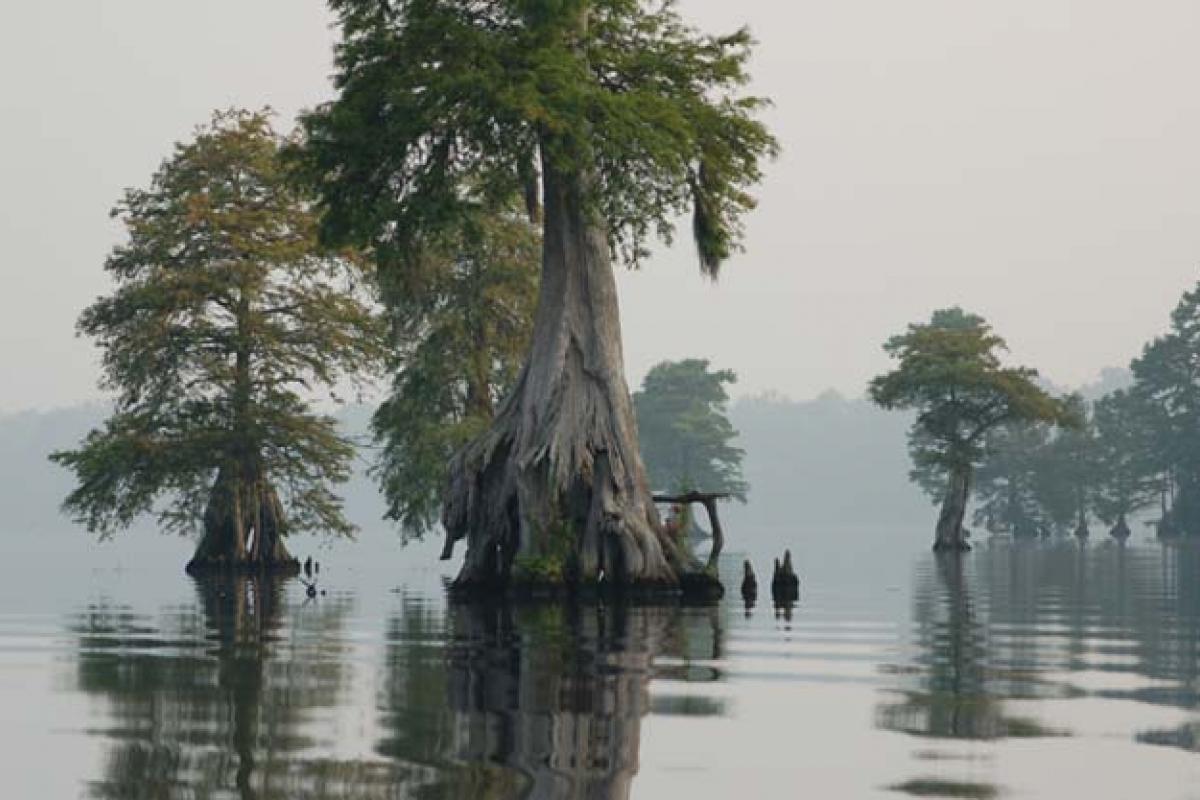 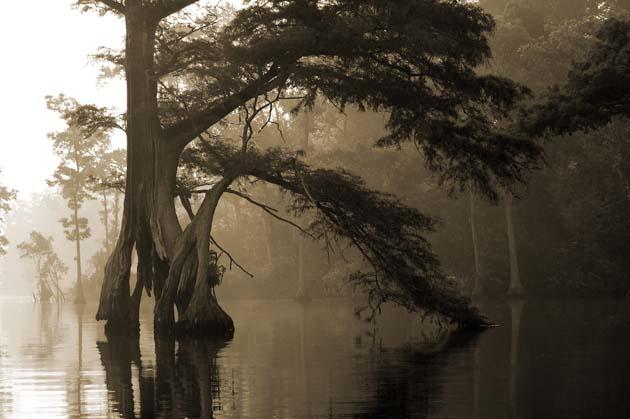 A typical scene in the Great Dismal Swamp

Today, the Great Dismal Swamp is a 111,000-acre federal wildlife preserve straddling the Virginia-North Carolina border, providing sanctuary for 200 species of birds and myriad other creatures.

But from the 17th through the 19th centuries, its thick, murky woods and forbidding quagmires served as another kind of refuge – for thousands of escaped slaves, displaced Native Americans, and exiles of various sorts in search of a safe hiding place.

"Indigenous Americans settled the swamp after colonial occupation of their traditional lands," beginning in the early 1600s, says archaeologist Daniel O. Sayers of American University. Less than a century later, they were joined by African Americans who "were becoming the primary source of labor in the region through enslavement systems.  Thousands resisted such horrible conditions by permanently relocating to the Great Dismal Swamp. These defiant people, known as maroons throughout the literature on the African Diaspora, formed permanent, multi-generational communities in the swamp, probably mixing with Indigenous Americans."

Until very recently, however, physical evidence of those communities was extremely limited. Now a group of researchers led by Sayers is conducting the first extensive archaeological survey and excavation project to focus on the Great Dismal. As of mid-2012, Sayers’ team has uncovered seven confirmed archaeological sites (and two more probable sites) ranging in size from one acre to 40 acres, with materials dating from 5,000 years ago to the early 20th century.

During the 2012 dig, researchers concentrated on an 18' X 18' section of dark-stained ground with "post molds" that once may have held supporting timbers for a building that does not seem to have been a residence.. The area contains "a lot of lead shot and tips of gun flints" that suggest that it may have been some kind of a defensive structure, said Sayers. It is on the highest point in the Dismal and is very different than anything else found in 10 years of excavations.

The swamp dwellers "did not have a lot of stuff," he said, and when they did acquire material culture, they would reuse until it had nearly disintegrated.  Of 2,500 "artifacts" found in seven weeks of excavation in 2012, at least 90 percent of them would fall through a mesh sheet with 1/4 inch holes, he said.  Even so, each of the  thousands of  artifacts discovered so far adds a bit more to the emerging chronicle of an area that was rich in local reputation and legend* long before Harriet Beecher Stowe made it widely known in her second novel, Dred: A Tale of the Great Dismal Swamp (1856).

But regional notoriety is not the same as historical understanding, which is why Sayers has been researching the swamp for ten years and in 2010 received an NEH grant for the work through 2013.

"While the bare contours of the social and economic history of the swamp is grasped by scholars," he explains, "the details and many key aspects of the world inside the swamp between 1607 and 1860 remain largely unknown because so little was written about what happened in that morass over those centuries."

The first substantial account dates from 1665 when William Drummond, colonial governor of what is now North Carolina, got lost while hunting and accidentally discovered, near the center of the swamp, the 3,100-acre lake that now bears his name.

In 1728, William Byrd II surveyed the Dismal (noting “the everlasting shade occationd by the thick shrubbs and bushes, so that the friendly beams of the sun can never penetrate”) and proposed draining the swamp to uncover what “will be the fittest soil in the world for the producing of hemp.” That project never materialized, but by 1730 the Dismal’s abundant cypress and cedar trees were supplying timbers for shipbuilding and shingles for construction.

In 1763, George Washington visited the swamp and saw considerable potential for lumber and farming if the land could be drained. He and some other Virginians formed the Great Dismal Swamp Land Company and began digging a canal (now designated Washington Ditch) to float out the harvest. Eventually, they abandoned the idea of draining the swamp. But commercial interest in the Dismal remained high.

"After 1800," Sayers says, "corporations had parceled the swamp into private landholdings and begun the process of canal excavation and lumbering the swamp for its cypress and cedar trees.

"Enslaved workers by the thousands were brought in to perform the onerous and dangerous labor for the companies--by the 1830s tens of miles of canals had been excavated, numerous settlements of African American laborers dotted the canal corridors, and boats and barges carrying goods and people from the world outside the swamp ran up and down the canals year round."

In addition to the artifacts, he says, “we have also recorded over 500 ‘cultural features’ through excavation and survey, most of which date to the 1600 to 1860 period. This number includes the remnant soils of several cabin footprints, fire pits, soil stains from individual posts placed in the ground, refuse dumping pits, and many with undetermined functions."

Jane Aikin, director of NEH's Division of Research Programs, which funds Sayers' work, says that "most recently the focus of this project has been on three questions: Did development of parts of the swamp result in decreases in size, or even disintegration of the communities? How did 19th-century development affect the trade relations of the community members? And were the communities’ survival practices, such as obtaining food, also affected?"

Sayers expects that the answers to those and other questions will change the way the nation regards the Dismal and its role in the mid-Atlantic. "This project is generating new informed knowledge that is helping to bring this hidden history into the purview of the public and scholarly discussions in the United States and and beyond."

* The Dismal even had its own ghost story, encapsulated in Thomas Moore’s 1806 poem “A Ballad: The Lake of the Dismal Swamp” – the tale of a lovelorn Indian man who fought his way

Through tangled juniper, beds of reeds
Through many a fen where the serpent feeds,
And man never trod before.

all in order to join his deceased love, whose spirit dwells in the swamp

Where, all night long, by a fire-fly lamp,
She paddles her white canoe.

The folktale was probably inspired by foxfire glimmers.

Daniel Sayers’ archaeological research on the Great Dismal Swamp is supported by a $200,000 NEH Collaborative Research grant, awarded in 2010.