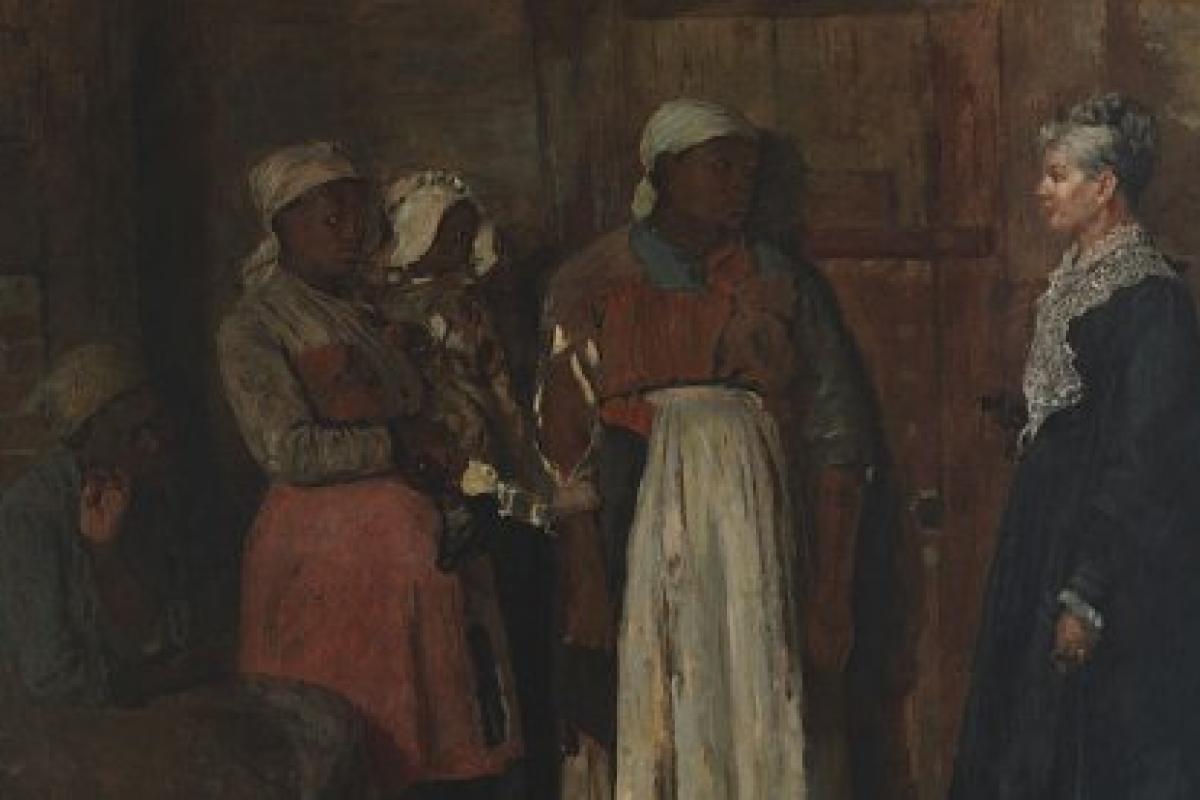 "A Visit from the Old Mistress," painted by Winslow Homer in 1876

In the aftermath of the Civil War, African-Americans finally attained emancipation, citizenship, and the right to vote; these hard-won achievements, however, soon came under assault as pre-war socio-economic patterns re-emerged in the South.

At the end of the Civil War, much of the conquered Confederacy lay in ruins: cities such as Atlanta and Richmond were utterly destroyed, the few railroads across the region were torn up, and plantations and farms that had once produced bountiful cash crops for export were burnt to the ground or abandoned. Union troops occupied the land, enforcing the deconstruction of Confederate political structures, the removal of the rebellious Southern elite from government participation, and the liberation of the black population from almost three centuries of bondage. Federally, Radical Republicans in Congress impeached President Johnson and passed the 14th and 15th amendments, granting blacks the same rights to citizenship, suffrage, and protection under the law as whites enjoyed. With these new rights, black Americans soon expanded their social and political power, electing the first black US Senator (Hiram Rhodes Revels) in 1870 and establishing the first public schools in the South for African-Americans. But what looked like progress from the perspective of African-Americans and Northerners was interpreted as anarchy and upheaval by many south of the Mason-Dixon.

By 1873, many white Southerners were calling for “Redemption” – the return of white supremacy and the removal of rights for blacks – instead of Reconstruction. This political pressure to return to the old order was oftentimes backed up by mob and paramilitary violence, with the Ku Klux Klan, the White League, and the Red Shirts assassinating pro-Reconstruction politicians and terrorizing Southern blacks. Within a few years, Northern attentions were consumed by apathy and fatigue and the South slipped back toward many of the patterns of the antebellum era. So dire was the situation that historian W. E. B. DuBois described the period as one where “The slave went free; stood a brief moment in the sun; then moved back again toward slavery.” Learn more about this fractious time in American history at Edsitement, the NEH’s educational website.