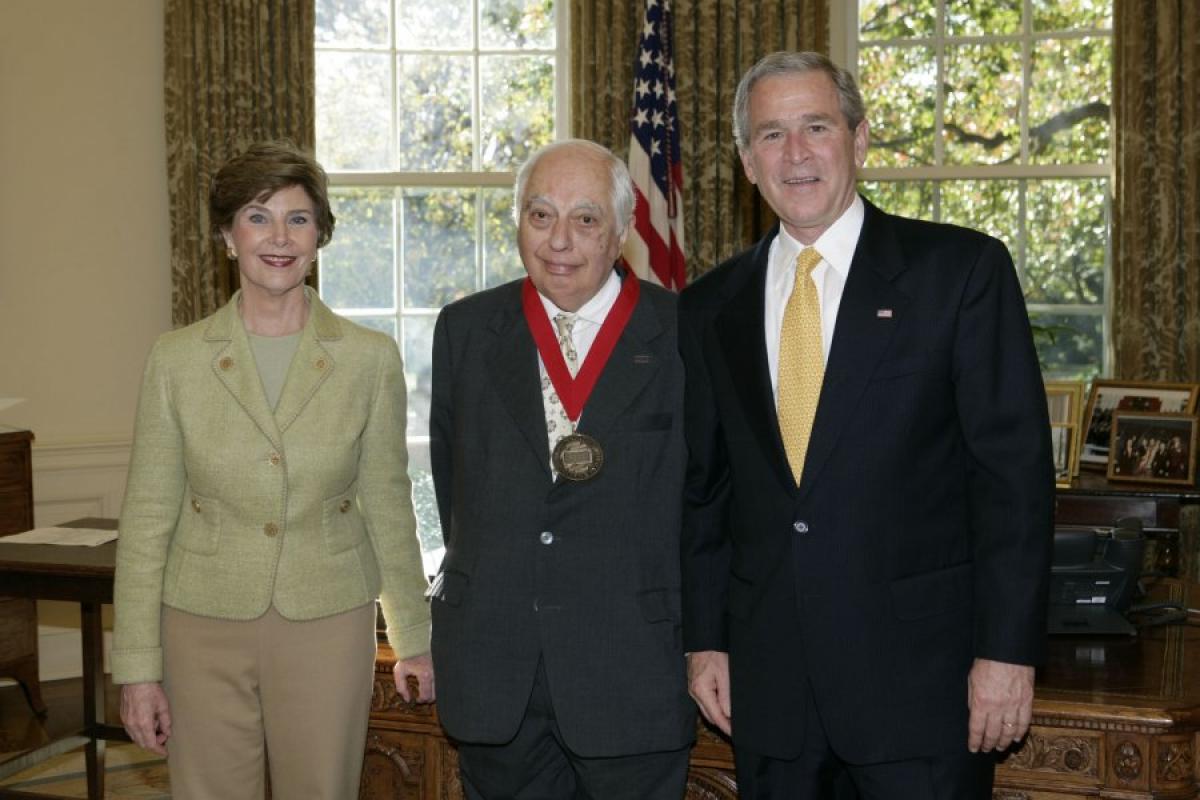 Bernard Lewis, at the awarding of the 2006 National Humanities Medals in a White House ceremony.

“Bernard Lewis personified a bold lifelong effort to study and better understand the history of Islam and Muslim people, a great project to which he brought enormous linguistic and intellectual gifts,” said NEH Chairman Jon Parrish Peede in a statement. “As a humanist he had few peers; as a scholar of the Middle East his contributions were foundational.”

Born in London, Lewis discovered an interest in languages as he prepared for bar mitzvah, surprising his parents afterward when he announced that he wished to continue learning Hebrew. Studying wars with the French from the British point of view as a young man he wanted to know how the same history was written in France. In a 2006 interview with former NEH Chairman Bruce Cole, he recalled a book his father obtained for him that described the same wars but from the French point of view. “I think that was the beginning of my career as a historian of the Middle East,” he said, “wanting to see what things looked like from the other side.”

After the war Lewis assumed a new chair in Near Eastern Studies at the University of London’s School of Oriental Studies. In 1950, he published The Arabs in History, a synthesizing work that showed off his lucid writing style while taking advantage of the increasingly specialized scholarship within his field. Around the same time Lewis was invited to use Ottoman archives, newly opened to Western researchers. As always his great linguistic gifts made difficult advanced scholarship possible and, in this case, led to his pioneering work, The Emergence of Modern Turkey.

“For the first time,” wrote the professor of Middle Eastern studies R. Stephen Humphreys in Humanitiesmagazine in 1990, “the historical development of a contemporary Middle Eastern state was portrayed not merely (or even primarily) as something created by European intervention, but as an internal process generated by the changing goals and needs of Middle Easterners over a period of two centuries.”

Lewis went on to many other achievements over a long and prolific career, becoming a contender in wide-ranging debates over the current Middle East and a sparring partner of Edward Said, the star of a later generation of scholars following a rather different political and historical compass. The “clash of civilizations,” the phrase and idea made famous by the Harvard professor Samuel Huntington, was coined by Lewis and used in his 1990 Jefferson Lecture in the Humanities, which was republished in the Atlantic under the title “The Roots of Muslim Rage.”

“The crucial thing to know about him,” Humphreys wrote, “is that he is a traditional European liberal—one who looks to the legal and spiritual autonomy of the individual within a secular society as the central value and ultimate goal of politics.”

After 9/11, Lewis was an important public source of information on the history of Islam and his books What Went Wrong? and The Crisis of Islam became best-sellers. His views were widely associated with the foreign policy of George W. Bush.