Martha Nussbaum Named the 2017 Jefferson Lecturer in the Humanities 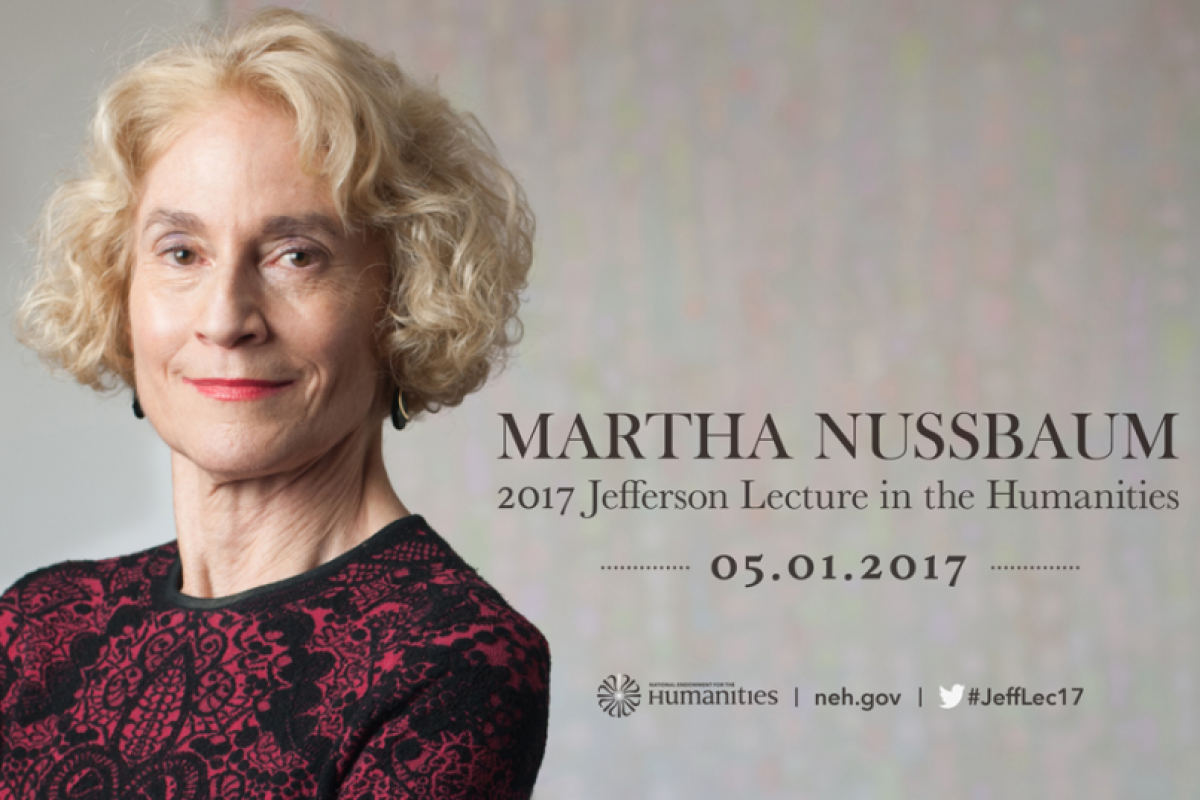 The lecture is the highest honor the federal government bestows for distinguished intellectual achievement in the humanities. The lecture is produced by the National Endowment for the Humanities (NEH), a federal agency created in 1965.  NEH awards grants that support understanding and appreciation of cultural topics including languages and literature, history, philosophy and others. The Jefferson Lecture in the Humanities is the agency’s signature annual public event.

Nussbaum will deliver the lecture on Monday, May 1 at the John. F. Kennedy Center for the Performing Arts at 7:30 p.m. The lecture is free and open to the public and will also stream live online at neh.gov.

Nussbaum is the University of Chicago’s Ernst Freund Distinguished Service Professor of Law and Ethics. In November 2016, Japan’s Inamori Foundation awarded her the Kyoto Prize in Arts and Philosophy, noting that she “has led global discourse on philosophical topics that influence the human condition in profound ways.”

Her Jefferson lecture topic, “Powerlessness and the Politics of Blame,” will draw from her latest book project. The project brings a philosophical view to political crises in America, Europe, and India by offering a deeper understanding of how fear, anger, disgust, and envy interact to create a divisiveness that threatens democracies.

NEH Chairman William D. Adams said: “We are deeply honored that Martha Nussbaum has agreed to give the 2017 Jefferson Lecture, and we look forward to learning her thoughts on ‘Powerlessness and the Politics of Blame’. Across her long and immensely productive career, Martha has been a tireless and peerless advocate for the role and utility of philosophy in our public life. With this honor, we celebrate at once her philosophical achievements and her example as an engaged and passionate public philosopher.”

Nussbaum said she was deeply honored by the invitation to deliver the 2017 Jefferson Lecture in the Humanities.

“It is urgent for us to understand ourselves better, to see why we have arrived at this state of division, hostility, and non-communication,” Nussbaum said. “A philosophical approach, focused on a close look at human emotions, offers that understanding of ourselves. . . . I believe it also offers us strategies of hope and connection.”

Nussbaum, who has written and edited dozens of books and written more than 500 papers, received her MA and PhD from Harvard University. Prior to joining the faculty of the University of Chicago, she was a University Professor at Brown University. From 1986 to 1993, while teaching at Brown, Nussbaum was also a research advisor at the World Institute for Development Economics Research, Helsinki, a branch of the United Nations University. She is a founding president of the Human Development and Capability Association, and she has received 57 honorary degrees from universities in North America, South America, Europe, Asia and Africa. In addition to the Kyoto Prize, Nussbaum was awarded the Prince of Asturias Prize in 2012, the Nonino Prize in 2015, and the Inamori Ethics Prize, also in 2015, among others.

The lecture was established by NEH in 1972. Previous lecturers include jurist and law professor Paul Freund, writer Saul Bellow, and filmmaker Martin Scorsese.

Tickets will be available to the public in April through neh.gov. Click here to sign up for ticketing notification updates.