50 years of the National Endowment for the Humanities (NEH)

The National Endowment for the Humanities (NEH) this week will kick off a year-long celebration of the agency’s 50thanniversary.

Fifty years ago, on September 29, President Lyndon B. Johnson signed into law the National Foundation on the Arts and the Humanities Act of 1965 at a White House Rose Garden ceremony, attended by scholars, artists, educators, political leaders, and other luminaries.  (Read a history of how NEH got its start ).

The law created the National Endowment for the Humanities as an independent federal agency, the first grand public investment in American culture. It identified the need for a national cultural agency that would preserve America’s rich history and cultural heritage, and encourage and support scholarship and innovation in history, archeology, philosophy, literature, and other humanities disciplines.

In the five decades since, NEH has made more than 63,000 grants totaling $5.3 billion, including leveraging an additional $2.5 billion in matching grants to bring the best humanities research, public programs, education, and preservation projects to the American people. Examples of NEH impact include funding that has led to the discovery of a lost Jamestown settlement fort, brought the scholarship of famed linguist Deborah Tannen to a broader audience, created the first museum exhibit of the now cultural icon King Tut, preserved the papers of ten presidents including George Washington and Abraham Lincoln, invested in the career of then relatively unknown documentary filmmaker Ken Burns, and thousands of other examples.

“For the past 50 years the National Endowment for the Humanities has helped create and sustain the nation’s cultural capital,” said NEH Chairman William Adams. “NEH grants have enabled libraries and museums to preserve and develop their collections. NEH grants have allowed historic sites to broaden their public programs. Our grants have funded exhibitions across the country that give Americans access to history and culture in their towns and cities. Our grants have sparked additional investment that has expanded the ability of cultural organizations to serve the public. The immense growth in this cultural infrastructure would not have been possible without NEH leadership and public investment in the humanities to support America’s cultural legacy.” (Read reflections from Chairman William Adams on NEH’s 50th anniversary.)

Below are highlights of NEH’s 50th anniversary celebrations: 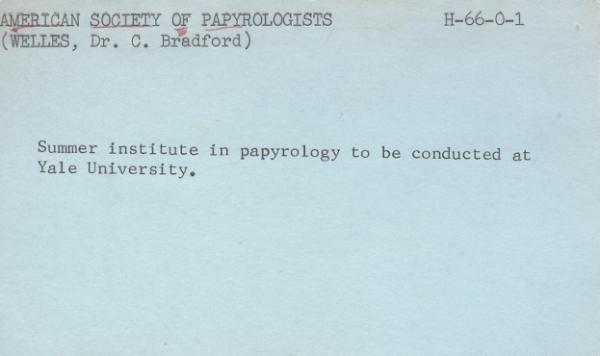 NEH's first grant, issued in 1966, was to the American Society of Papyrologists to conduct a summer institute in papyrology