Woman demonstrating the origins of the Nahuat name for the burred plant Triumfetta grandiflora, called tsonsasal (tson= hair and sasal=stickly).

The National Endowment for the Humanities (NEH) and the National Science Foundation (NSF) recently announced 27 awards totaling more than $4 million in the 10th round of a joint effort to document languages threatened with extinction.

“Language is a source of invaluable cognitive, historical and environmental information,” said NSF Director France Córdova.  “Most of what is known about human communication and cognition is based on less than 10 percent of the world’s 7,000 languages.  We must do our best to document living endangered languages and their associated cultural and scientific information before they disappear."

New estimates from a three-year, NSF-supported study conclude that at least every three months somewhere in the world a language loses all its remaining speakers.  The finding, based on newly compiled data, is an update from previous estimates that found at least one language goes extinct every two weeks.

Since the first round of awards DEL in 2005, the program has funded nearly 300 projects and more than 200 researchers who have captured high-quality data from languages in danger of extinction.

In this new round of awards, for example, DEL is funding the Advances in Linguistic, Ethnobotanical, and Botanical Sciences through Documentation of Traditional Ecological Knowledge project.  Anthropologist Jonathan Amith of Gettysburg College in Pennsylvania and botanist John Kress of the Smithsonian Institution will examine the ways endangered languages encode information on how communities have historically interacted with their environments.

The study will provide clues about environmental changes over generations of speakers; it also will improve understanding about increases or decreases in biodiversity and sustainable practices adapted to particular environments.

The project will create a corpus of Ayöök language data.  The interactive process will reawaken Ayöök traditional ecological knowledge that will be used by biochemists to expand maize genetics research at the Plant Sciences Department at the University of California, Davis.

“The NSF-NEH partnership to document endangered languages is making great strides,” said NEH Chairman William Adams.  “Together, the two agencies are supporting research and creating valuable language resources that serve linguists and indigenous communities around the globe to revitalize their languages.  And through its priority on Native American languages, NEH ensures the unique cultural and linguistic heritage of our own country is sustained.”

All of this year’s DEL projects will produce sophisticated digital products that can be publicly accessed through major language repositories such as the Archive of Indigenous Languages of Latin America, California Language Archive, the Endangered Language Archive at the School for African and Oriental Studies, and the Pacific and Regional Archive for Digital Sources in Endangered Cultures.

At the National Endowment for the Humanities, DEL projects are funded through the Division of Preservation and Access and the Division of Research, where there continues to be a priority on documentation of languages of the Americas.

A complete listing of this year's awards follows.

Institutional Grants (awarded by NSF or NEH, as indicated):

Conferences and Workshops (awarded by NSF)

The National Science Foundation is an independent federal agency that supports fundamental research and education across all fields of science and engineering. In fiscal year (FY) 2014, its budget is $7.2 billion. NSF funds reach all 50 states through grants to nearly 2,000 colleges, universities and other institutions. Each year, NSF receives about 50,000 competitive requests for funding and makes about 11,500 new funding awards. NSF also awards about $593 million in professional and service contracts yearly. 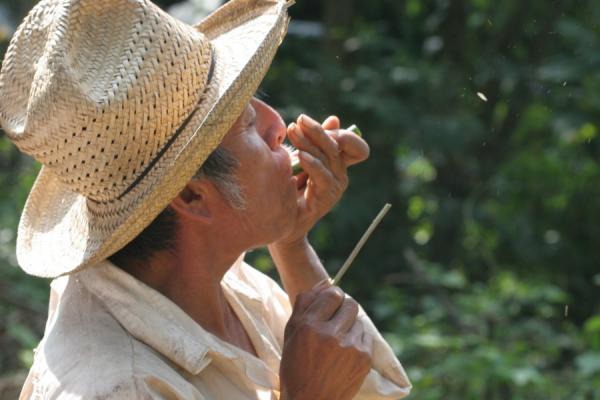 Demonstration of the Nahuat name, xokotatopo:nkowexo:t, for the Senna fructicosa tree. A man expels a piece of orange peel from the hollowed stem of the tree by forcing air through the tube, using a stick as a plunger. The name in Nahuat derives from xoko-  'orange' and tatopo:ni  'burst', then kow- 'tree' and exo:t  'green bean' (for the Legume pods).