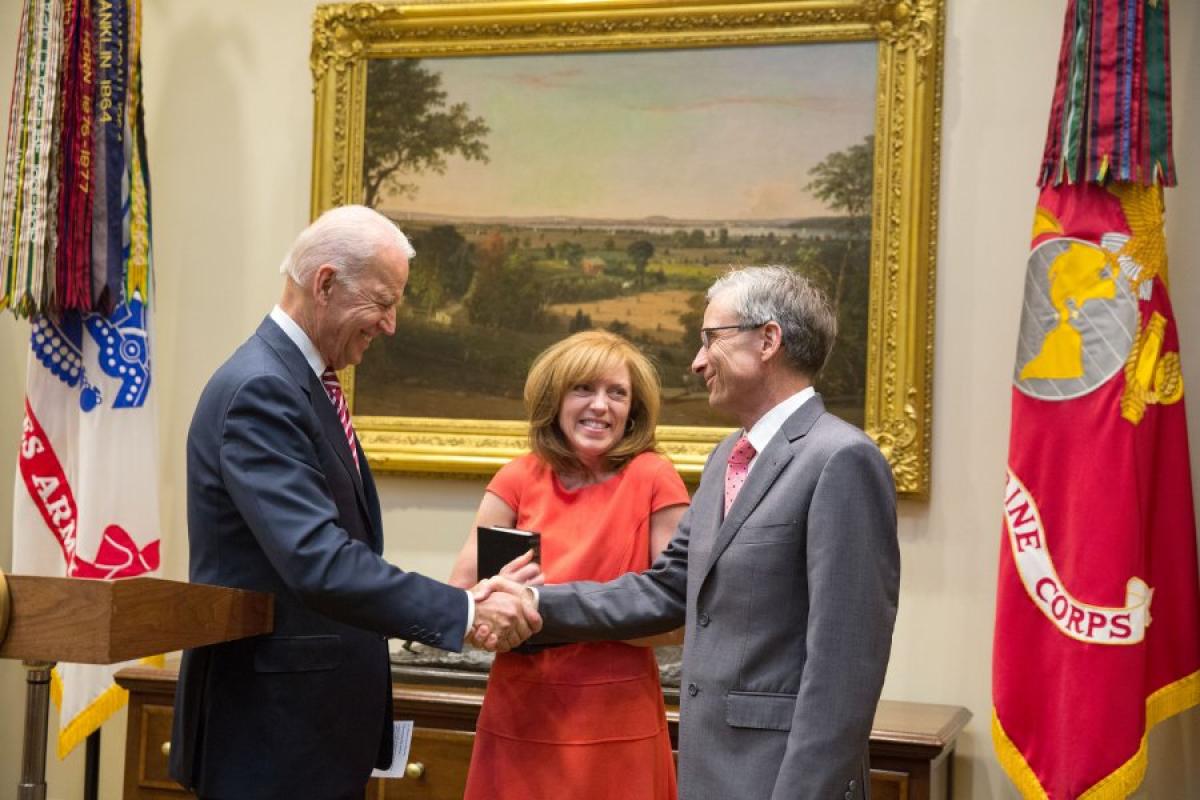 Vice President Biden performs the Ceremonial Swearing In of National Endowment for the Humanities Chairman Adams, at the White House, on July 22, 2014.

William D. Adams was ceremonially sworn in yesterday as the 10th chairman of the National Endowment for the Humanities (NEH) by Vice President Joe Biden at the White House. His tenure as Chairman began immediately.

“I am deeply honored to have been selected by President Obama to serve as the Chairman of the National Endowment for the Humanities, and I am grateful for the Senate’s recent confirmation,” said Adams. “The Endowment plays an enormously important role in the civic and cultural life of the country, and I am eager to help deepen the public’s appreciation of the quality and impact of its work. I am especially eager to highlight the important work that NEH is doing in strengthening communities and public institutions. I am also looking forward to meeting and working with our friends, supporters and grant recipients across the country.”

Founded in 1965, the National Endowment for the Humanities is an independent grant-making institution of the United States government dedicated to supporting research, education, preservation, and public programs in the humanities.

Adams, president of Colby College in Waterville, Maine from 2000 until his retirement on June 30, 2014, is a committed advocate for liberal arts education and brings to the Endowment a long record of leadership in higher education and the humanities.

A native of Birmingham, Michigan, and son of an auto industry executive, Adams earned his undergraduate degree in philosophy at Colorado College and a Ph.D. from the University of California at Santa Cruz History of Consciousness Program. He studied in France as a Fulbright Scholar before beginning his career in higher education with appointments to teach political philosophy at Santa Clara University in California and the University of North Carolina at Chapel Hill. He went on to coordinate the Great Works in Western Culture program at Stanford University and to serve as vice president and Secretary of Wesleyan University. He became president of Bucknell University in 1995 and president of Colby College in 2000.

Adams’s formal education was interrupted by three years of service in the Army, including one year in Vietnam. It was partly that experience, he says, that motivated him to study and teach in the humanities. “It made me serious in a certain way,” he says. “And as a 20-year-old combat infantry advisor, I came face to face, acutely, with questions that writers, artists, philosophers, and musicians examine in their work -- starting with, ‘What does it mean to be human?’”

In each of his professional roles, Adams has demonstrated a deep understanding of and commitment to the humanities as essential to education and to civic life. At Colby, for example, he led a $376-million capital campaign – the largest in Maine history – that included expansion of the Colby College Museum of Art and the gift of the $100-million Lunder Collection of American Art, the creation of a center for arts and humanities and a film studies program, and expansion of the College’s curriculum in creative writing and writing across the curriculum. He also spearheaded formal collaboration of the college with the Maine Film Center and chaired the Waterville Regional Arts and Community Center.

As senior president of the prestigious New England Small College Athletic Conference (NESCAC), Adams has been at the center of the national conversation on the cost and value of liberal arts education. “I see the power of what is happening on our campuses and among the alumni I meet across the country and around the world,” he says. “People who engage in a profound way with a broad range of disciplines – including, and in some cases especially, with the humanities -- are preparing to engage the challenges of life. They are creative and flexible thinkers; they acquire the habits of mind needed to find solutions to important problems; they can even appreciate the value of making mistakes and changing their minds. I am convinced that this kind of study is not merely defensible but critical to our national welfare.”

Adams, nicknamed "Bro" by his father in honor of a friend who died in World War Two, is married to Lauren Sterling, philanthropy specialist at Educare Central Maine and has a daughter and a stepson.

Adams was nominated for the position of Chairman of the National Endowment for the Humanities by President Barack Obama on April 10, 2014, and confirmed by the Senate on July 9, 2014.

Deputy Chairman Carole Watson has served as Acting Chairman of the National Endowment for the Humanities since the departure of former Chairman James A. Leach.

Please join the conversation and offer your congratulations to Adams with #NEHBroAdams.