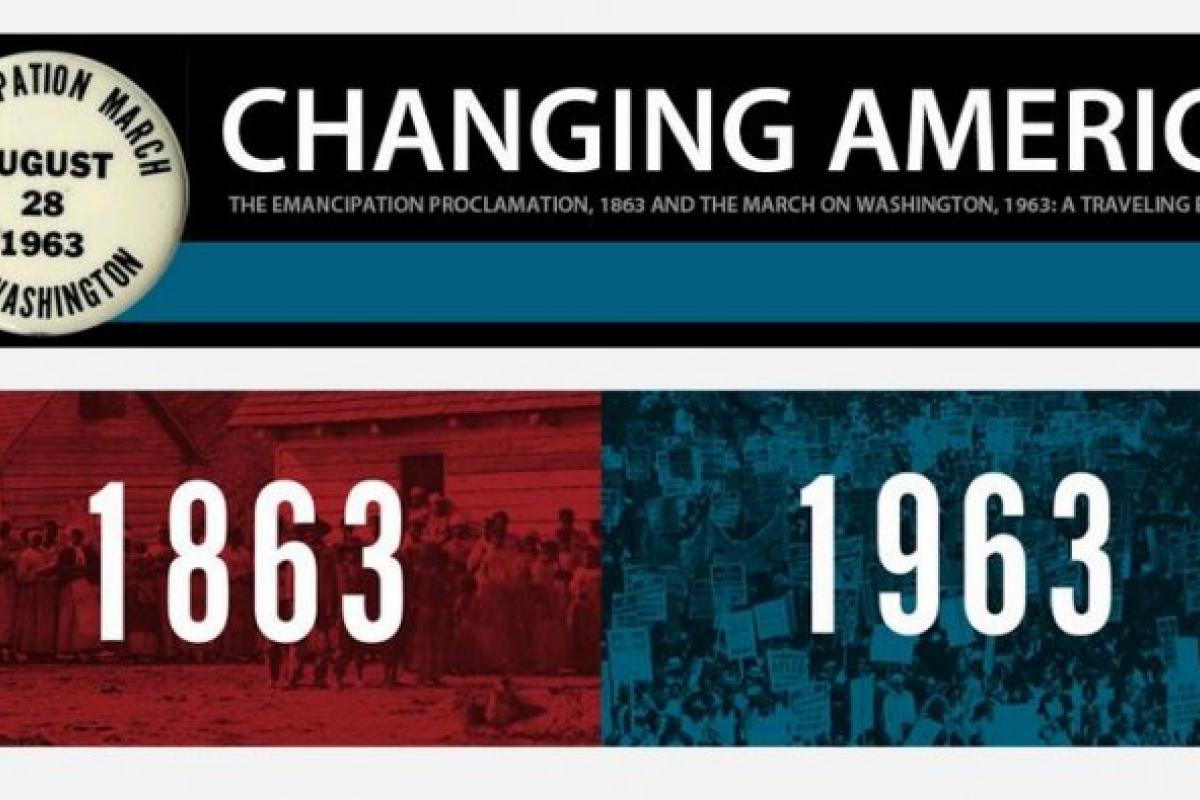 Fifty libraries, museums, and other public sites across America will host a traveling exhibition, Changing America: The Emancipation Proclamation, 1863 and the March on Washington, 1963, to explore the story of liberty and the American experience. The exhibition is the result of a collaboration between the American Library Association (ALA) Public Programs Office, the Smithsonian’s National Museum of African American History and Culture (NMAAHC), and the National Museum of American History (NMAH), and made possible by funding from the National Endowment for the Humanities (NEH).

The selected sites will host the exhibit for a six-week period between February 2014 and December 2017. All sites selected for the project will receive a grant of $1,700 from the ALA, with funding provided by the NEH, for expenses related to public programs. Participating sites will be required to present an opening event, and at least two public humanities programs for adult audiences, presented by qualified humanities scholars and related to exhibition themes. Public programming will encourage scholar-led reflection upon and discussion about the major issues surrounding the Emancipation Proclamation and the March on Washington, and acquaint new audiences with the history of these two critical events in American history. All showings of the exhibition will be free and open to the public.

Changing America is touring as part of an NEH initiative, Created Equal, that brings four films on America’s Civil Rights movement to communities across the nation to promote public conversations. For more information about the films see www.createdequal.neh.gov.

The National Museum of African American History and Culture was established as a Smithsonian museum by an Act of Congress in 2003. It is the only national museum devoted exclusively to the documentation of African American life, art, history and culture. It is now under construction on Washington’s National Mall, on a five-acre site adjacent to the Washington Monument. It is scheduled to open in winter 2015. For more information, visit www.nmaahc.si.edu.

The National Museum of American History collects, preserves and displays American heritage through exhibitions and public programs about social, political, cultural, scientific and military history. Documenting the American experience from Colonial times to the present, the museum looks at growth and change in the United States. For more information, visit www.americanhistory.si.edu

Created in 1965 as an independent federal agency, the National Endowment for the Humanities supports learning in history, literature, philosophy and other areas of the humanities.  NEH grants enrich classroom learning, create and preserve knowledge and bring ideas to life through public television, radio, new technologies, exhibitions and programs in libraries, museums and other community places. Additional information about the National Endowment for the Humanities and its grant programs is available at www.neh.gov.

For information about the location and dates of  Changing America exhibitions, please go to www.createdequal.neh.gov.