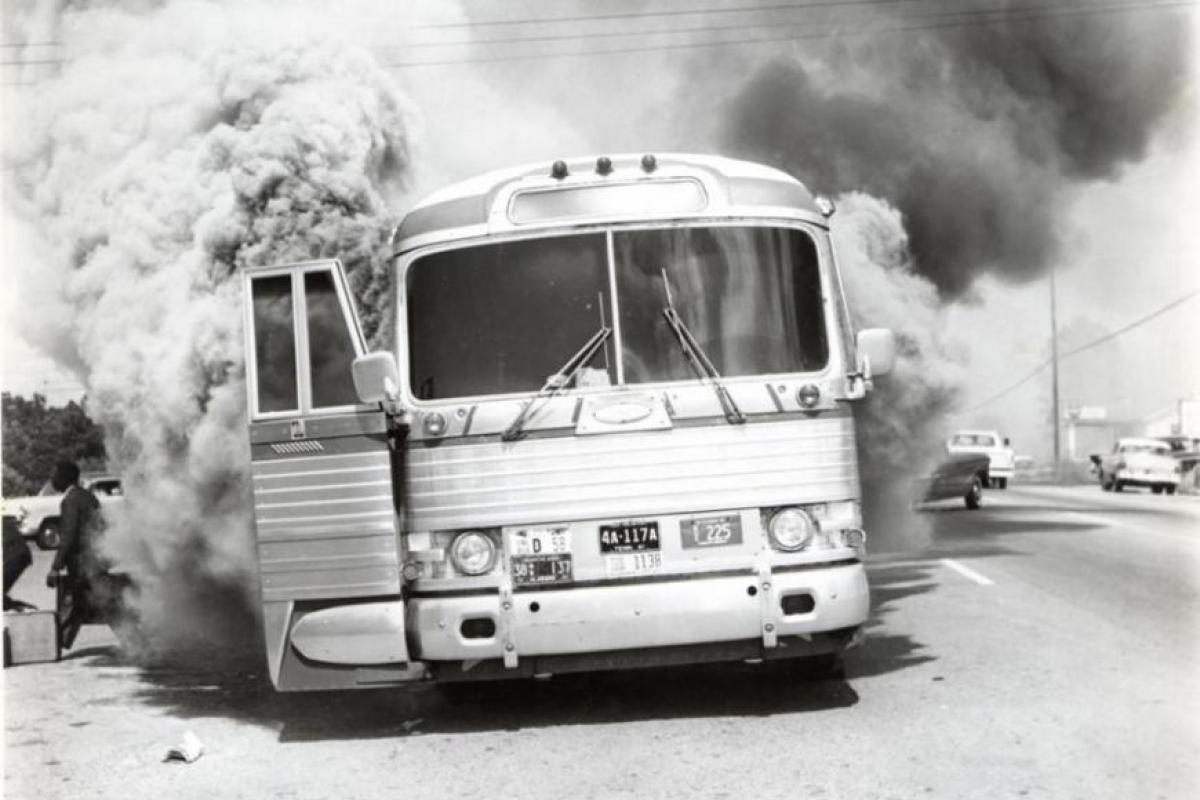 Mother’s Day, May 14, 1961: A Greyhound bus carrying the Freedom Riders was attacked by a mob who slashed its tires, and then firebombed the disabled vehicle outside of Anniston, Alabama.

***The application deadline for the Created Equal film set and public programming grants has been extended to May 15, 2013 ***

The National Endowment for the Humanities (NEH) is offering grants to up to 500 libraries and humanities organizations to develop public programming around a set of four NEH-funded films that explore the history of civil rights in America. Guidelines for the Created Equal: America’s Civil Rights Struggle grant opportunity are available here.

The Created Equal: America’s Civil Rights Struggleproject was developed by NEH to mark the 150th anniversary of the Emancipation Proclamation. Up to 500 communities across the nation will receive a packaged set of NEH-funded films on civil rights history, accompanied by programming resources to guide public conversations about the changing meanings of freedom and equality in U.S. history.

Each participating site will receive an award of up to $1,200 to support public programming exploring the themes of the Created Equal project. The documentary films featured in the set are: The Abolitionists, on the anti-slavery movement of the 1830s; Slavery By Another Name, which examines forced labor practices in America from Reconstruction to World War II; The Loving Story, an account of the landmark 1967 Supreme Court decision Loving V. Virginia which overturned anti-miscegenation laws in the United States; and Freedom Riders, about the brave band of activists who challenged segregation in the Deep South during the spring and summer of 1961.

The Created Equal film set was developed through a partnership of the National Endowment for the Humanities and the Gilder Lehrman Institute of American History. These four NEH-funded films tell a remarkable story about the importance of race in the making of American democracy, about the power of individuals to effect change, and about the historical contexts in which Americans have understood and struggled with ideas of freedom, equality, and citizenship.

Part of the National Endowment for the Humanities’ ongoing Bridging Cultures initiative, the Created Equal: America’s Civil Rights Struggle grant program will encourage communities across the country to revisit the history of civil rights in the U.S. and to reflect on the ideals of freedom and equality that have helped bridge deep racial and cultural divides in American life.

The Created Equal: America’s Civil Rights Struggle grant opportunity is open to museums and historical societies, humanities councils, public, academic, and community college libraries, and nonprofit community organizations. Applications are due by May 1, 2013.