Launched by the Library of Congress and the National Endowment for the Humanities (NEH) in 2007, Chronicling America provides enhanced and permanent access to historically significant newspapers published in the United States between 1836 and 1922. It is a part of the National Digital Newspaper Program (NDNP), a joint effort between the two agencies and 32 state partners.

"This magnificent resource captures the warp and weft of life as it was lived in grassroots America," said NEH Chairman Jim Leach. "Metropolitan newspapers were early targets for digitization, but Chronicling Americaallows the journalism of the smaller cities and the rural countryside to become accessible in all its variety—and sometimes, quirkiness."

"Chronicling America is one of the great historical reference services on the web," said Roberta Shaffer, associate librarian for Library Services at the Library of Congress. "It is a treasure trove of information about communities, personalities, key events and culture in the United States, and it is all free and available to the public."

The site now features 5 million pages from more than 800 newspapers from 25 states. The site averaged more than 2.5 million page views per month last year and is being used by students, researchers, congressional staff, journalists and others for all kinds of projects, from daily podcasts to history contests. The news, narratives and entertainment encapsulated in the papers transport readers in time.

For instance, on this day, Oct. 22, 100 years ago, there was a lot of news about Theodore Roosevelt recovering from an assassination attempt several days earlier. A Washington Times headline said "Roosevelt Home Swinging His Hat with Happiness, Finishes Tedious Trip to Oyster Bay in Good Shape." A crime story in the New York Tribune read, "Girl Runs Down Thief, Pajama-Clad Coed Races over Campus to Save Violin." International news focused on the First Balkan War. "20,000 Turks Reported Taken by Bulgarians," according to a story in The Washington Herald.

In 2003, NEH and the Library of Congress established a formal agreement that identified goals for the program, institutional responsibilities and overall support. In 2004, the NEH announced guidelines for grants, funded by NEH, awarded to cultural-heritage institutions wishing to join the program and select, digitize and deliver to the Library approximately 100,000 newspaper pages per award. Since 2005, the NEH has awarded more than $22 million to 32 state libraries, historical societies and universities representing states in the national program.

The Library of Congress, the nation’s oldest federal cultural institution, is the world’s preeminent reservoir of knowledge, providing unparalleled collections and integrated resources to Congress and the American people. Many of the Library’s rich resources and treasures may also be accessed through the Library’s website, www.loc.gov. 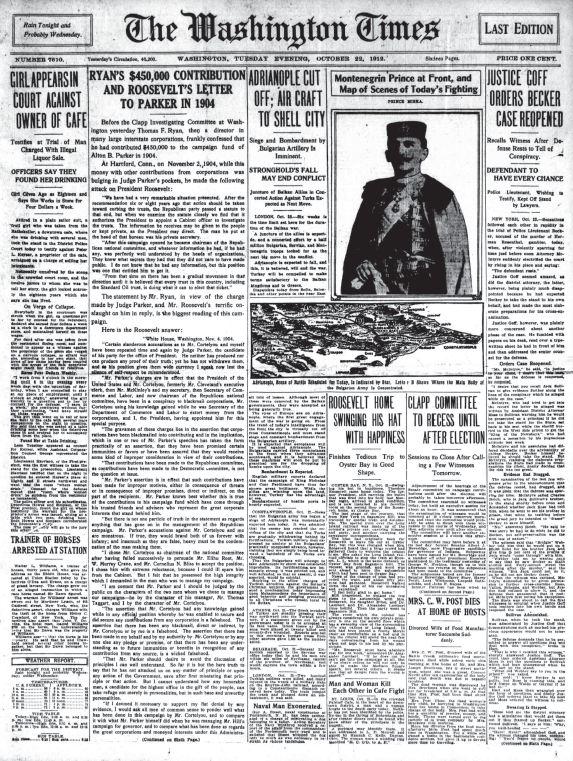