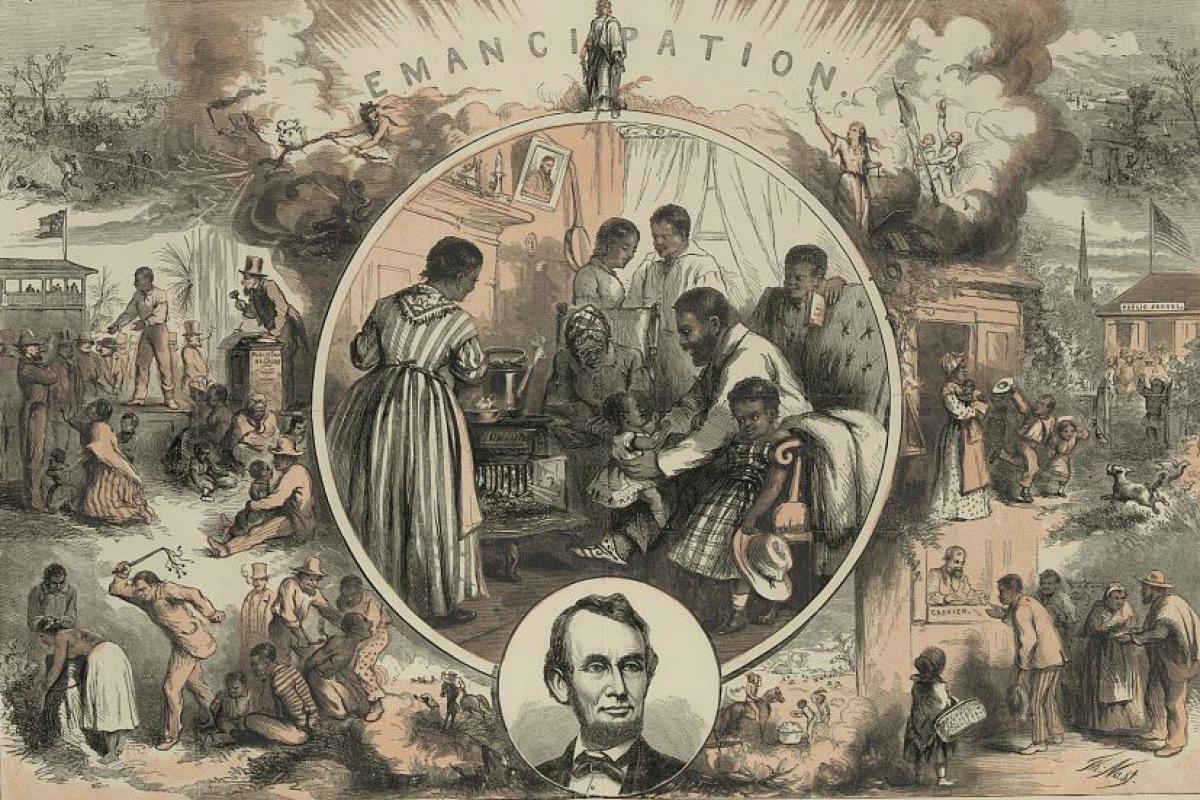 Thomas Nast illustration of the benefits of emancipation.

On September 17, 1862, Union and Confederate troops squared off at Antietam Creek in the first major battle of the Civil War on Northern soil. By sunset, almost 23,000 men lay dead or wounded but the Union had won a desperately needed strategic victory. Five days later, President Abraham Lincoln, bolstered by the Union Army’s performance, issued the Preliminary Emancipation Proclamation, publicly declaring his intention to make abolition a goal of the war.

One hundred and fifty years later, the National Endowment for the Humanities (NEH) is sponsoring Emancipation Nation: Celebrating Freedom on Constitution Day, to mark the momentous occasion.

Two programs on September 17, 2012 will focus attention on the dramatic period leading up to the issuance of the Preliminary Emancipation Proclamation.

“The Emancipation Proclamation forever changed our country,” said Jim Leach, Chairman of the National Endowment for the Humanities. “To understand our history it is critical to observe what America was like in the days preceding Lincoln’s proclamation. The panel’s representation of wide-ranging perspectives will provide a unique view of this period, and allow the audience to grasp the magnitude of what happened as a result,” he said.

The panel will be moderated by University of Richmond President Edward L. Ayers, award-winning author of books on the Civil War and creator of the Valley of the Shadow digital project.   Eric Foner, Dewitt Clinton Professor of History at Columbia University and winner of both the Pulitzer and Bancroft prizes, will describe the perspective of President Lincoln.  Thavolia Glymph, Associate Professor of African and African American Studies and History at Duke University and the author and coauthor of award-winning books on enslaved and slaveholding women, slavery, and emancipation, will describe the situation as it appeared to enslaved African Americans.  Gary Gallagher, John L. Nau III Professor in the History of the American Civil War at the University of Virginia and author and editor of groundbreaking books on the Civil War, will analyze the military context of Emancipation, and Christy Coleman, President and CEO of the American Civil War Center in Richmond, Virginia and writer and lecturer on Civil War topics, will portray the views of Frederick Douglass, abolitionists, and Northern free blacks.

Through a partnership with the National Museum of American History and with the support of History Channel, students and teachers across the country will be able to participate in the afternoon discussion.  The public can watch the program online as it happens and the historians will take questions from audience members and respond to questions posed via Twitter.

The Emancipation Nation program coincides with Constitution Day, a day set aside by Congress in 2004, when all federally-funded educational institutions are required to study the U.S. Constitution. The Preliminary Emancipation Proclamation is a key moment in the process that led to the adoption of the Thirteenth Amendment, which outlawed slavery.