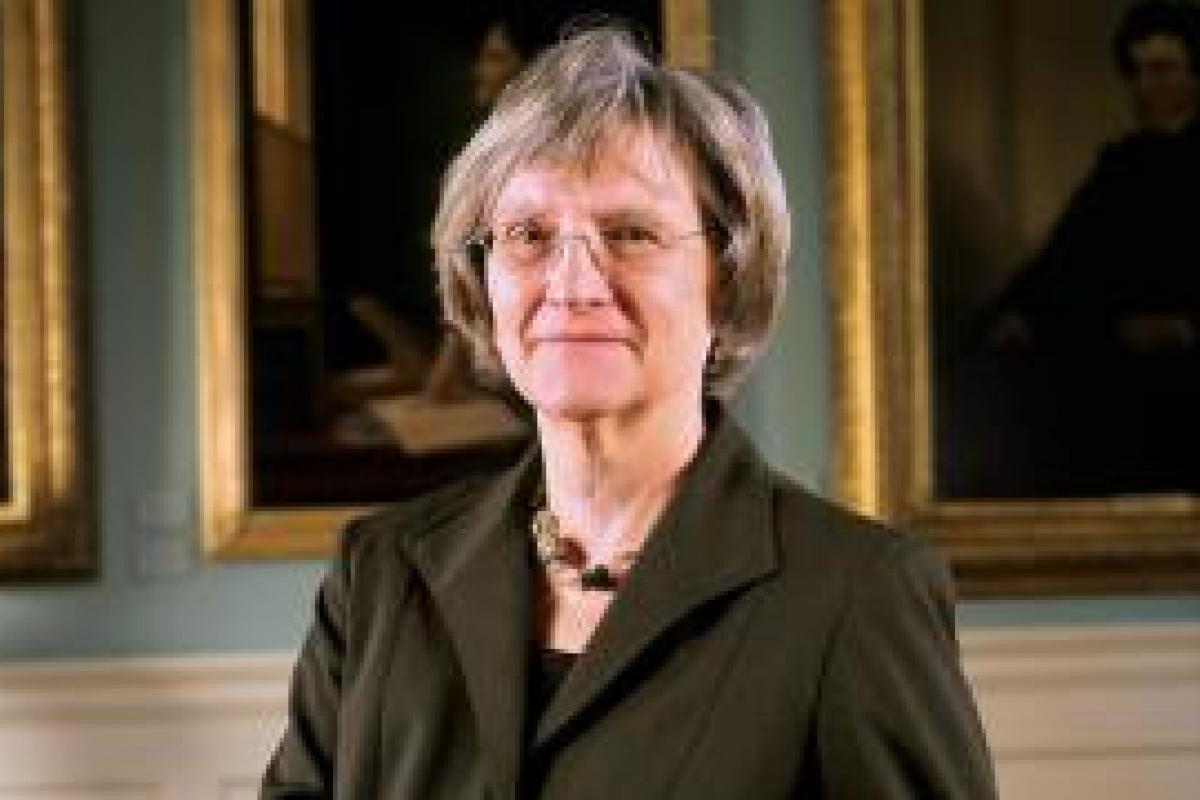 Drew Gilpin Faust, eminent historian and President of Harvard University, will deliver the 2011 Jefferson Lecture in the Humanities. The annual lecture, sponsored by the National Endowment for the Humanities (NEH), is the most prestigious honor the federal government bestows for distinguished intellectual achievement in the humanities.

“It is a rare individual who can break new ground from both the library archives and the president’s podium,” said NEH Chairman Jim Leach. “Drew Gilpin Faust is a pathfinder, as a scholar and a leader in higher education. This distinguished historian has revealed for us the lives and minds of those confronted by the turbulent social changes of the Civil War era, and then proceeded to apply extraordinary administrative skills to leadership of one of the world’s premiere academic institutions.”

Faust will present the 40th Jefferson Lecture in the Humanities on Monday, May 2, 2011, at 7:30 p.m. at The John F. Kennedy Center for the Performing Arts in Washington, D.C.

In the lecture, “Telling War Stories: Reflections of a Civil War Historian,” Faust will discuss representations of war throughout history.

Before taking the helm at Harvard, Faust established herself as a preeminent scholar of the Civil War and the American South, often delving into the human consequences of the Civil War and its transformation of antebellum Southern society. Her most recent book, This Republic of Suffering: Death and the American Civil War (Alfred A. Knopf, 2008) examines the impact of the Civil War’s enormous death toll on the lives of 19th-century Americans. Praised by Newsweek as “one of those groundbreaking histories in which a crucial piece of the past, previously overlooked or misunderstood, suddenly clicks into focus,” This Republic of Suffering was awarded the Bancroft Prize in 2009, was a finalist for both a National Book Award and a Pulitzer Prize, and was named by The New York Times as one of the “10 Best Books of 2008.”

Faust is also the author of five other books, including Mothers of Invention: Women of the Slaveholding South in the American Civil War (University of North Carolina Press, 1996), a look at how the wives and daughters of plantation owners responded to the social and economic upheaval wrought by the war, for which she won the Francis Parkman Prize in 1997. Her other works include: Southern Stories: Slaveholders in Peace and War (University of Missouri Press, 1992); The Creation of Confederate Nationalism: Ideology and Identity in the Civil War South (Louisiana State University Press, 1982); James Henry Hammond and the Old South: A Design for Mastery (Louisiana State University Press, 1982); and A Sacred Circle: The Dilemma of the Intellectual in the Old South, 1840-1860 (University of Pennsylvania Press, 1977).

A dedicated educator, Faust was twice honored for her teaching during her 25 years on the faculty of the University of Pennsylvania, where she served as the Annenberg Professor of History. In 2001 she left Philadelphia to become the founding Dean of the Radcliffe Institute for Advanced Study at Harvard, which she helped transform into an interdisciplinary center with a focus on the study of women, gender, and society.

She was appointed in 2007 as the 28th President of Harvard University and is the first woman to hold that office. During her tenure as Harvard’s President, Faust has worked to improve access to the university by expanding its financial aid programs, promoted collaboration across academic disciplines and units, advocated for increased federal funding for scientific research, and raised the profile of the arts on campus. Faust also serves as the Lincoln Professor of History in Harvard’s Faculty of Arts and Sciences.

Born in New York City in 1947, Faust’s interest and understanding of Southern history was shaped by her childhood in Virginia’s Shenandoah Valley. She earned a bachelor’s degree in history from Bryn Mawr College, and a Master’s and Ph.D. in American Civilization from the University of Pennsylvania.

Faust is married to Charles Rosenberg, a leading historian of medicine and science, who is Professor of the History of Science and Ernest E. Monrad Professor in the Social Sciences at Harvard. Faust and Rosenberg have two daughters, Jessica Rosenberg and Leah Rosenberg.

Tickets to the lecture are free of charge and distributed on a first-come, first-served basis. Ticket requests must be submitted by April 27 via the online form. All other inquiries, as well as ticket requests for persons lacking online access, may be directed to (202) 606-8446.

NEH gratefully acknowledges the generous support for this year’s Jefferson Lecture provided by the National Trust for the Humanities, the President’s Committee on the Arts and the Humanities, and HISTORY (formerly The History Channel).