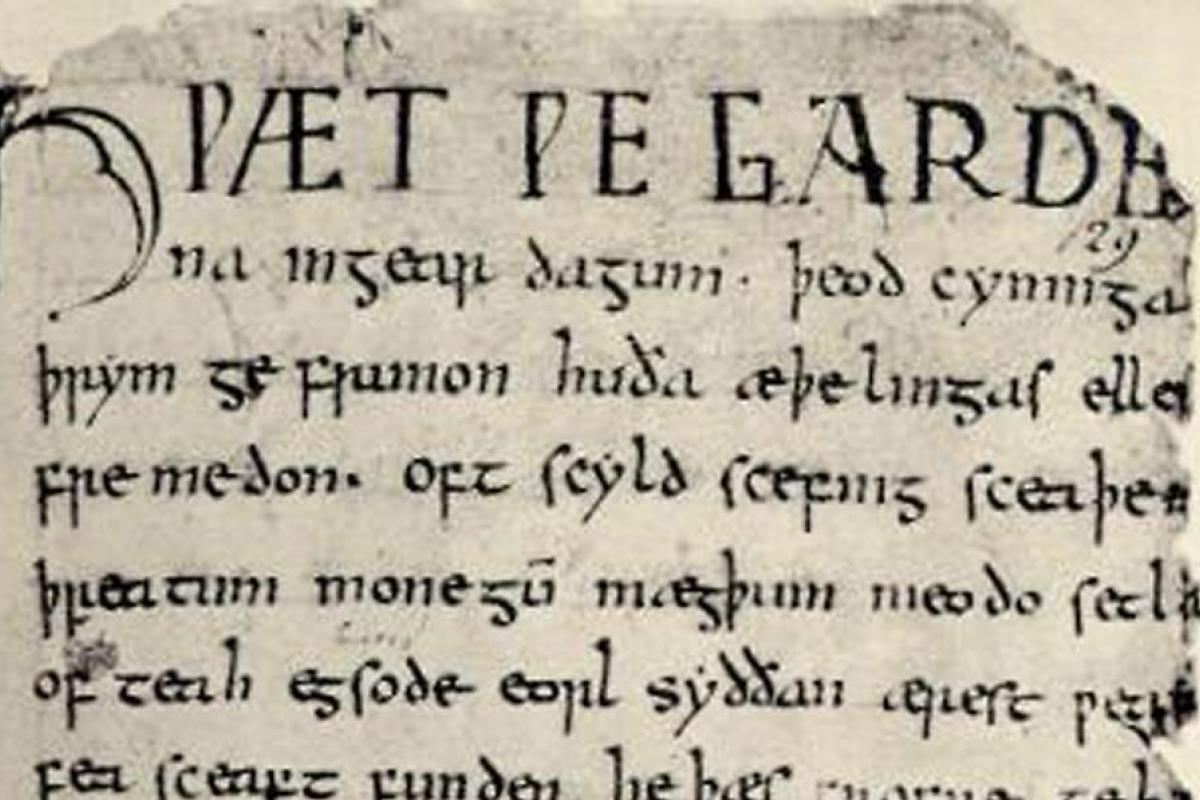 First lines of Beowulf from the damaged Nowell Codex.

Anglo-Saxon (Old English) literature – of which the best-known example is the epic poem Beowulf – flourished from the sixth century CE until the Norman Conquest. But its influence persists today in many contemporary fantasy works of which J. R. R. Tolkien’s Lord of the Rings trilogy and J. K. Rowling’s wildly popular Harry Potter series are perhaps the most recognizable. One need only scan the shelves at a local bookstore or note the continued popularity of contemporary medievalist fantasy dramas to know that the old world of the Anglo-Saxon literary tradition, with its fire-breathing dragons and unique poetic form, continues as part of mainstream popular culture.

EDSITEment's lesson plan for teachers, "The Beauty of Anglo-Saxon Poetry: A Prelude to Beowulf," provides a background for understanding these and similar influences.

As one of the first literary scholars to write seriously on the monsters of Beowulf in his seminal work “Beowulf: The Monsters and the Critics,” J. R. R. Tolkien understood well the effects of Anglo-Saxon literature on the modern imagination. A number of Anglo-Saxon themes and motifs appear in his Lord of the Rings trilogy and many of the character and place names in the mythological world of his novels are derived from Old English. For example, the root word searu-, which means "treachery” or “cunning,” appears in the name Saruman – whom devoted Tolkien fans will recognize as a major antagonist in the fantasy novels; and the Old English word for earth, middan-geard, becomes Middle-earth, the aptly-named fantasy world of the novels.

Less overt, but no less interesting, is the apparent influence of Anglo-Saxon literature on J. K. Rowling’s Harry Potter series. Harry’s fierce battle with the Hungarian Horntail during the Triwizard Tournament in Harry Potter and the Goblet of Fire recalls another mighty confrontation between man and dragon as described in Beowulf.

Undoubtedly functioning as one literary influence among many, Anglo-Saxon literature is most apparent in Rowling’s use of words like “deathday” – an annual celebration of a ghost’s death as opposed to birth – which, according to the Oxford English Dictionary is derived from the Old English word deothdeage. Similarly, “grindylow” – the name of an underwater species that attacks Harry during the Triwizard Tournament – may be derived from the name of one of Beowulf’s antagonists whose home is also underwater, Grendel.

There are countless other literary works that could be analyzed for their Anglo-Saxon inspiration, demonstrating that critical study of the language continues to be both interesting and relevant.

Through the EDSITEment lesson plan, visitors can examine Old English riddles in both their original form and in translation, such as the following “Riddle 5” (with answer below):

My gown is silent as I thread the seas,
Haunt old buildings or tread the land.
Sometimes my song-coat and the supple wind
Cradle me high over the homes of men,
And the power of clouds carries me
Windward over cities. Then my bright silks
Start to sing, whistle, roar,
Resound and ring, while I
Sail on untouched by earth and sea,
A spirit, ghost and guest, on wing.

Through the lesson plan, you learn that alliteration plays an integral role in Anglo-Saxon poetry as shown by the last line in the above poem in its original form: flode ond foldan, ferende gæst. Furthermore, you will learn that a kenning is a particular type of metaphoric compound that functions as its own mini-riddle (such as helmberend or "helmet bearer" which means "warrior") as well as other features of Anglo-Saxon poetry.

For those curious about Old English pronunciation, the EDSITEment lesson plan also links educators to sound files so you can “read” along.

The EDSITEment lesson plan is meant to function as a prelude to the study of Beowulf and gives a basic introduction to key terms pertinent to the study of Anglo-Saxon literature. It also lists a number of internet resources that may be of interest to those who wish to expand their understanding of Old English.