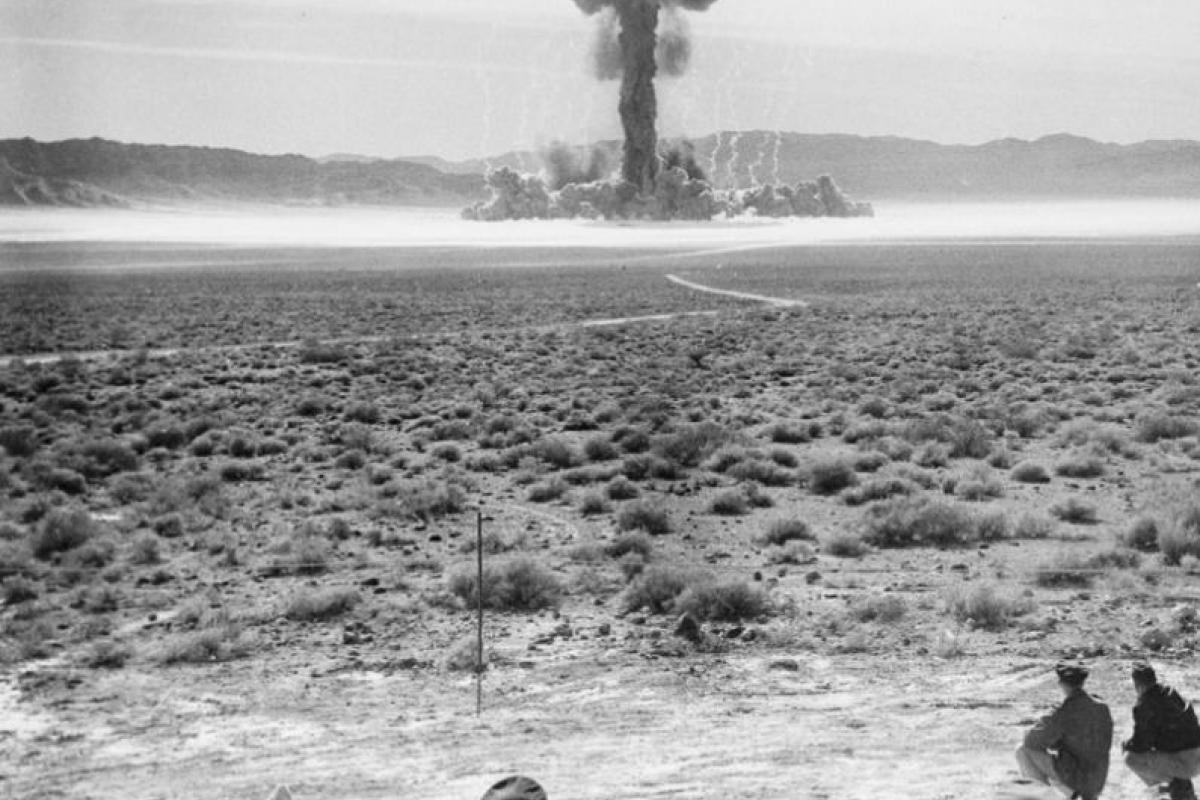 Sixty years ago Las Vegas was a dusty desert crossroads. Then President Harry S Truman decided to turn 800,000 barren acres of a military bombing range into the Nevada Test Site for atomic weapons. Hundreds of technicians and support crews swarmed into the area to operate the nation’s nuclear proving ground.

“Building Atomic Vegas,” an exhibition at the Atomic Testing Museum, traces the history of Las Vegas’s development in tandem with 42 years of nuclear testing.

The first test began at dawn on Jan. 27, 1951, as a United States B-50 bomber dropped a nuclear warhead from nearly 20,000 feet onto Frenchman Flats in the Nevada desert. The device, codenamed Able, detonated 1060 feet above the desert floor, shaking the earth and echoing through the nearby mountains. The test would be the first of more than 900 documented nuclear detonations that would take place at the Nevada Test Site between 1951 and 1992.

“Mushroom clouds could be seen from Vegas,” some forty-five miles away, says Karen Green, curator at the Atomic Testing Museum. “Viewing parties were held on casino rooftops and people drove out of town to watch.”

To mark the 60th anniversary of the first nuclear test, the Nevada Humanities Council has helped fund “Building Atomic Vegas” at the Atomic Testing Museum through Jan. 5, 2012.

The doors to the exhibition open onto a view of a giant mushroom cloud against a dark sky. Exhibits feature a B-53 gravity bomb on loan from the U.S. Air Force, artifacts from the testing site, correspondence from Howard Hughes expressing concern that radiation was in the water supply, movie posters, and artwork.

The exhibition at the museum, an affiliate of the Smithsonian Institution, features the dog tags issued to area civilians so they could be identified in case of an accident. It shows photographers filming mushroom clouds seven miles away from ground zero. It shows young women as “Miss Atomic Vegas,” dressed up as an atomic bomb.

Las Vegas, says Green, was selected as the Continental nuclear proving ground because of its predictable weather and low population—less than 40,000 people. “A committee said there would be little danger to Vegas. If people were exposed they could take showers.”

As the bombs exploded, so did the Las Vegas economy. The test site brought federal funding and jobs. From 1950 to 1960 the population of Las Vegas doubled. By the end of the decade the mushroom cloud symbol was used on billboards, casino marquees, advertisements, and even the cover of the Las Vegas High School yearbook. In the 1970s, the population doubled again, prompting casino owner Benny Binion to declare, “The best thing to happen to Vegas was the Atomic Bomb.”