NEH-Supported Projects on the Life and Legacy of Dr. Martin Luther King, Jr. 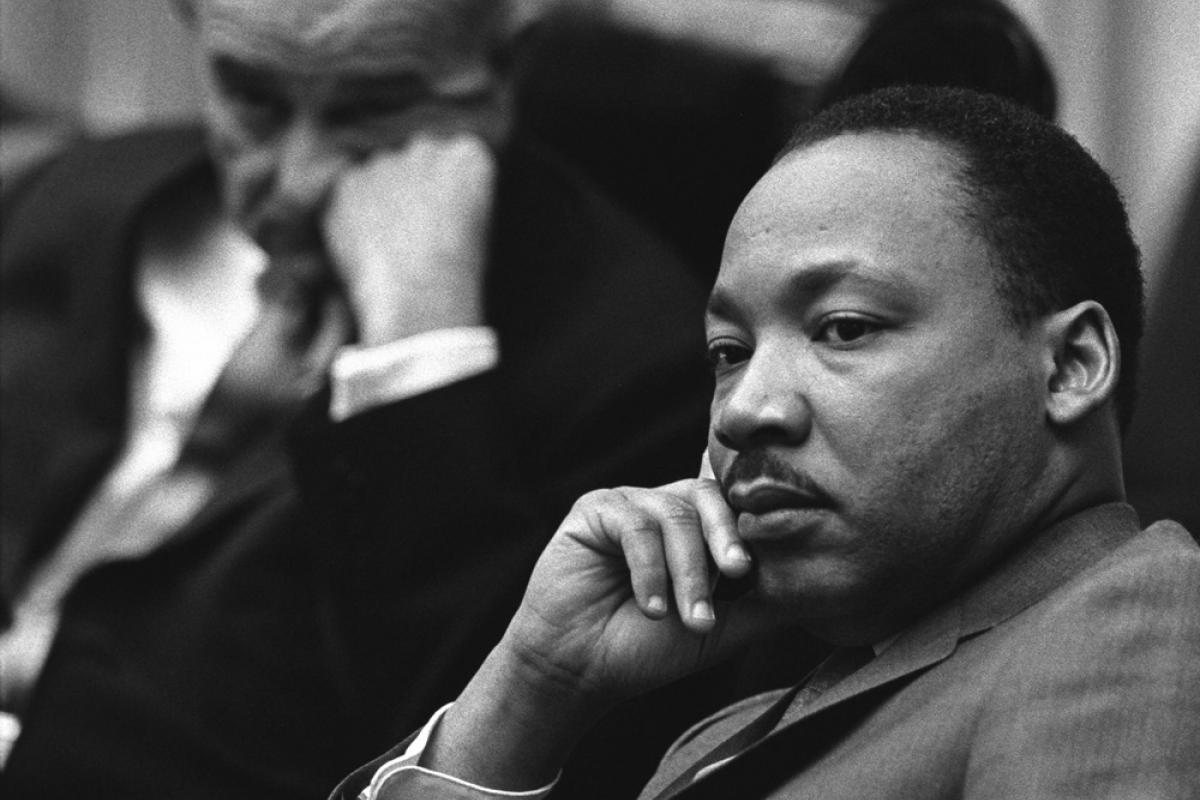 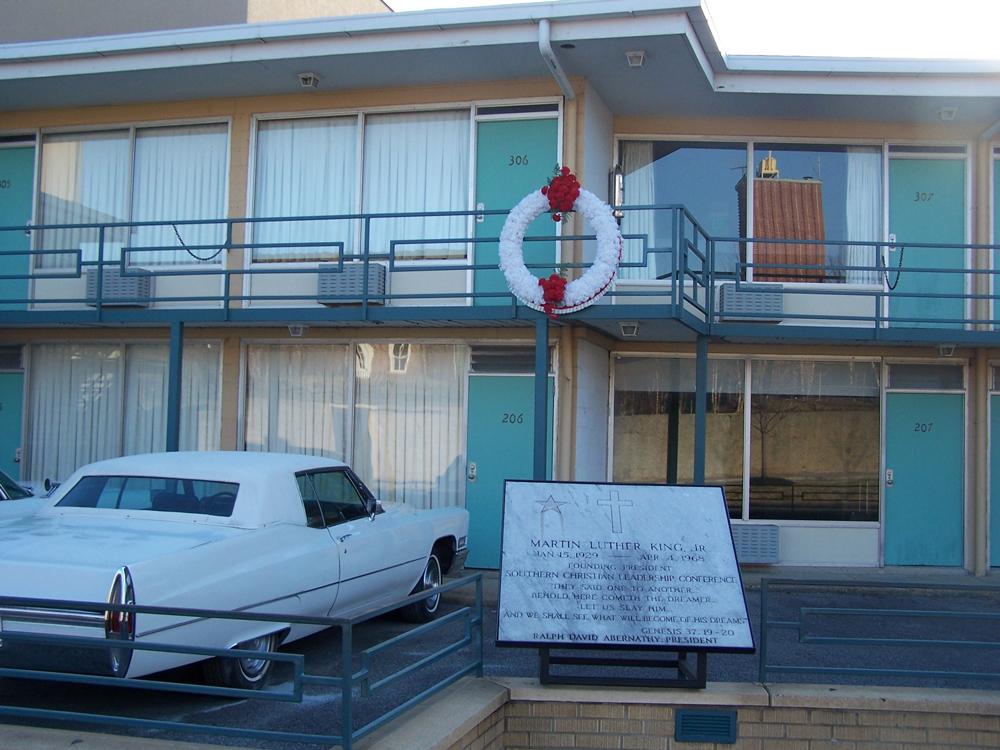 The Lorraine Motel, where Dr. King was assassinated.

Martin Luther King, Jr. met his untimely death on April 4, 1968 when an assassin’s bullet pierced his jaw while King was standing on the balcony of his room at the Lorraine Motel in Memphis, Tennessee, where he had come in support of the sanitation workers’ strike. Today the Lorraine Motel is the site of the National Civil Rights Museum, which chronicles key episodes in the American civil rights movement through personal artifacts, photographs, historic documents, news footage, and audio recordings. The museum’s collections include the police evidence from the State of Tennessee’s legal case against assassin James Earl Ray, Ku Klux Klan uniforms and paraphernalia, and an archive of recorded personal recollections of the Civil Rights movement by participants.

In August 2010, the National Endowment for the Humanities awarded a $750,000 challenge grant to the National Civil Rights Museum to create the museum’s first permanent endowment for educational programming around civil rights and the museum’s exhibits. The grant—which will be matched by $2.25 million in non-federal funds—will allow the museum to hold weekly public lectures, readings, films and discussion groups for students over 18 and to create a web-based virtual tour of the museum and distance learning programs for middle and high school students. The new Lorraine Endowment Fund for the Humanities will also enable the National Civil Rights Museum to interview the sanitation workers, city council members, lawyers, judges and other elected officials thrust into the dramatic confrontation that led to the assassination of Dr. King to make these oral histories available to students, scholars, teachers, historians, and the public.

From his early sermons to his final “I’ve Been to the Mountaintop” address, part of Dr. King’s lasting legacy is the powerful language he used to lead and inspire. In 1985, Coretta Scott King made Stanford University historian Clayborne Carson the curator of these words, entrusting to him the task of editing and publishing the collected papers of Martin Luther King, Jr.

Since then, grants from the National Endowment for the Humanities have supported the King Papers Project’s mission to publish a definitive 14-volume annotated edition of Dr. King’s most significant speeches, sermons, correspondence, public statements, published writings and unpublished manuscripts. To date the King Papers Project has published six volumes documenting Kings’ family roots and religious training, his rise to prominence as a leader of the Montgomery bus boycott, emergence as a national spokesperson for civil rights and African Americans, and influence on the student sit-in movement and the 1960 presidential election.

Published by the University of California Press, these volumes have sold nearly 25,000 copies and revealed new facets of King’s career, including documents that provide a glimpse into his relationship with the burgeoning student movement in 1960. It also made available previously unpublished sermons and religious writings that have allowed scholars to trace the evolution of King’s sermons to rough drafts and original source materials. Volumes VII and VIII of The Papers of Martin Luther King, Jr. are due out in 2012 and 2013.

EDSITEment, the National Endowment for the Humanities’ website of teaching and learning materials created by specialists in literature, history, and other fields in the humanities, contains numerous resources, activities, and lesson plans to help teachers, students, and parents understand the impact Dr. King has had on our country and global efforts towards peace and civil rights.

A lesson plan based on an audio recording Dr. King’s famous 1963 “I Have a Dream” speech introduces K-2 students to the civil rights movement. Middle school students can investigate the links between Dr. King’s pursuit of change through nonviolent means and the successful campaign by Mahatma Gandhi to free India from British colonial rule in the grades 6-8 lesson plan “Martin Luther King, Jr. and the Power of Nonviolence.”And the grades 9-12 lesson plan “Ordinary People, Ordinary Places: The Civil Rights Movement” teaches high school students about the contributions and sacrifices of those who followed MLK’s leadership through an exploration of key battle sites of the civil rights struggle, such as the lunch counter of the Greensboro, North Carolina Woolworths and the trail from Selma to Montgomery, Alabama where civil rights demonstrators marched in protest of voting rights violations.

Through its Division of Education Programs, the National Endowment for the Humanities provides opportunities for schoolteachers and community college faculty to deepen their understanding of the legacy of Martin Luther King, Jr. and his influence on the civil rights movement.

This summer Jackson State University in Mississippi will host NEH-supported two-week workshops for fifty community college faculty members titled “Landmarks of American Democracy: From Freedom Summer to the Memphis Sanitation Workers’ Strike.” Participants in the workshop will visit historic sites such as Medgar Evers’ NAACP office in Jackson and the Lorraine Motel in Memphis, attend oral history panels of individuals who participated in various aspects of the civil rights movement, and conduct their own research on the confluence of the labor and black civil rights movement that set the stage for the 1968 Memphis Sanitation Workers’ Strike.

In July 2010, faculty at Georgia State University helped schoolteachers trace the rise and fall of segregation in the South in another NEH-funded workshop called “The Problem of the Color Line: Atlanta Landmarks and the Civil Rights History.” (See the box below for a link to the file.) Thirty-eight K-12 teachers spent a week studying the civil rights history of local Atlanta landmarks—including Piedmont Park, where Booker T. Washington delivered his famous “Atlanta Compromise” speech in 1895, and Ebenezer Baptist Church where Martin Luther King, Jr. was pastor—and producing lesson plans around these sites to teach American history in their own classrooms.