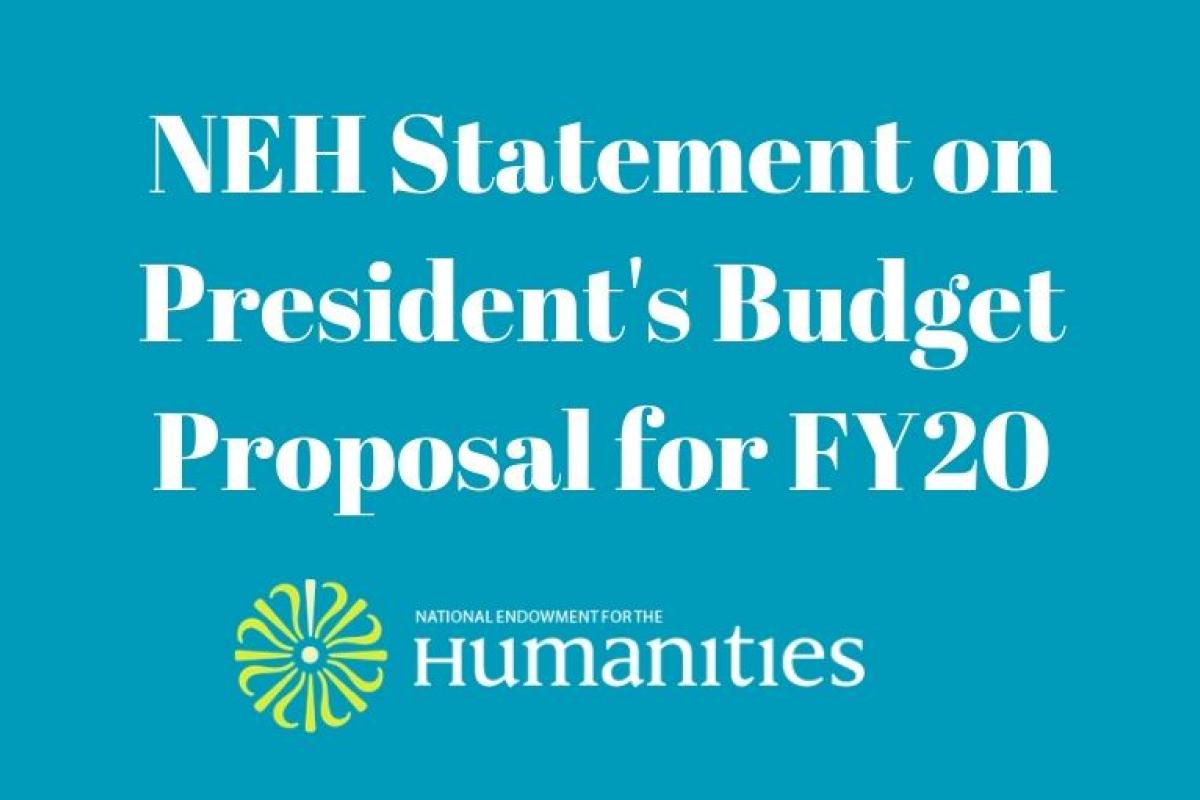 WASHINGTON, D.C. — Today the Trump administration released its comprehensive budget for the Federal government for FY 2020. The White House has requested that Congress appropriate approximately $38 million to the National Endowment for the Humanities (NEH) for the orderly closure of the agency. This amount includes funds to meet matching grant offers in effect as of October 1, 2019, as well as funds to cover administrative expenses.

“As NEH awaits Congressional action on the President’s proposed budget, the agency is continuing normal operations and will announce our latest round of FY 2019 awards this spring,” says NEH Chairman Jon Parrish Peede.

Per the Consolidated Appropriations Act of 2019, approved by Congress and signed into law by President Donald J. Trump on February 15, 2019, NEH’s FY 2019 budget is $155 million, the agency’s largest appropriation since FY 2010.

Since its creation in 1965, NEH has established a significant record of achievement through its grantmaking programs. Over these five decades, NEH has awarded more than $5.7 billion for humanities projects through more than 65,000 grants. That public investment has led to the creation of books, films, and museum exhibits, and to ensuring the preservation of significant cultural resources around the country.

NEH initiatives such as a partnership with the First Nations Development Institute are helping revitalize endangered Native American languages. The agency’s first round of NEH Infrastructure and Capacity-Building Challenge Grants, designed to spur investment and growth at the nation’s museums, libraries, and cultural centers, are providing for expanded gallery space to display the Philadelphia Museum of Art’s collections of early American art, enabling construction of an arts and culture hub in Juneau, Alaska, and supporting infrastructure upgrades at Taliesin West, Frank Lloyd Wright’s Scottsdale, Arizona, home.

Each year more than 2,400 teachers participate in NEH-sponsored workshops and institutes on topics ranging from the construction of the transcontinental railroad to the experience and participation of American women in the Revolutionary and Civil Wars, translating into a more enriching educational experience for some 350,000 students across America. NEH grants have enabled the development of the country’s art conservation education programs, producing graduates who have applied their expertise to the conservation of precious heritage items such as the Star-Spangled Banner and the Declaration of Independence.

NEH grants have reached every part of the United States and provided humanities programs and experiences to benefit all of our citizens. They have made possible a national library-based reading and discussion program on America’s Founding era and a traveling exhibition on WWI America. They have allowed the Hill Museum and Manuscript Library to provide digital access to endangered ancient religious manuscripts from the Middle East, Africa, and Europe, enabled the preservation of Fahrenheit 451 author Ray Bradbury’s personal papers and correspondence and made it possible to trace the journeys of more than 91,000 enslaved Africans transported to the Americas through the Trans-Atlantic Slave Trade. Recent NEH-supported documentaries on the lives of performer Sammy Davis Jr. and on the history of the nation’s Historically Black Colleges and Universities have brought the stories of important American figures and institutions to viewers around the country.

Through these projects and thousands of others, the National Endowment for the Humanities has inspired and preserved what is best in American culture.

NEH applicants, grantees, and panelists should consult the attached FAQ for information about NEH current operations and grant awards.