WASHINGTON, D.C. — The National Endowment for the Humanities (NEH) has awarded $120,000 to help repair and restore statues of iconic historical figures that have been damaged or vandalized, and to construct new ones, in an effort to revitalize public interest in American history in advance of the nation’s 250th anniversary in 2026. 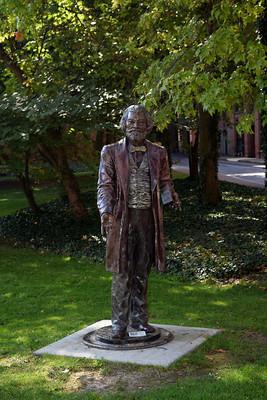 One of 13 statues of abolitionist Frederick Douglass in Rochester, New York, was vandalized in July 2020.

“We cannot expect our youth to know about our history if we don’t provide them with educational materials—whether it’s films, books, or statues—to tell them about our history,” said NEH Chairman Jon Parrish Peede. “NEH is pleased to provide funding to help highlight the accomplishments of the many individuals who helped build and shape our exceptional country.”

To date, NEH has awarded four NEH Chairman’s Grants of $30,000 each to assist in the restoration of historical statues in four municipalities.

These new grants were awarded under NEH’s “A More Perfect Union” initiative, which seeks to promote a deeper understanding of American history and culture and advance civics education and knowledge of core principles of government in preparation for the semiquincentennial of the nation’s founding. NEH Chairman’s Grants are discretionary grants of up to $30,000 to provide fast-track funding in response to urgent institutional needs.

These grants complement previously funded NEH projects, such as the  Frederick Douglass Papers Project, the PBS film The Abolitionists, and  two recent documentaries, The Vote and Unladylike2020, which examine the struggle for women’s suffrage and the lives of women trailblazers of the twentieth century.

NEH’s support for new and previously erected historical statues of iconic Americans responds to the Executive Order on Building and Rebuilding Monuments to American Heroes issued by President Donald J. Trump on July 3, 2020, which called for both the restoration and preservation of existing historical monuments, and the creation of a new “National Garden of American Heroes” honoring significant Americans. As part of a White House-designated task force, NEH is working in partnership with the Department of the Interior, National Endowment for the Arts, the Advisory Council on Historic Preservation, and the General Services Administration to solicit public nominations for individuals to be honored in the Garden of Heroes and research potential sites for the statue garden, planned to open in 2026.