From King Tut to Madame John’s Legacy, NEH leaves its mark on Louisiana 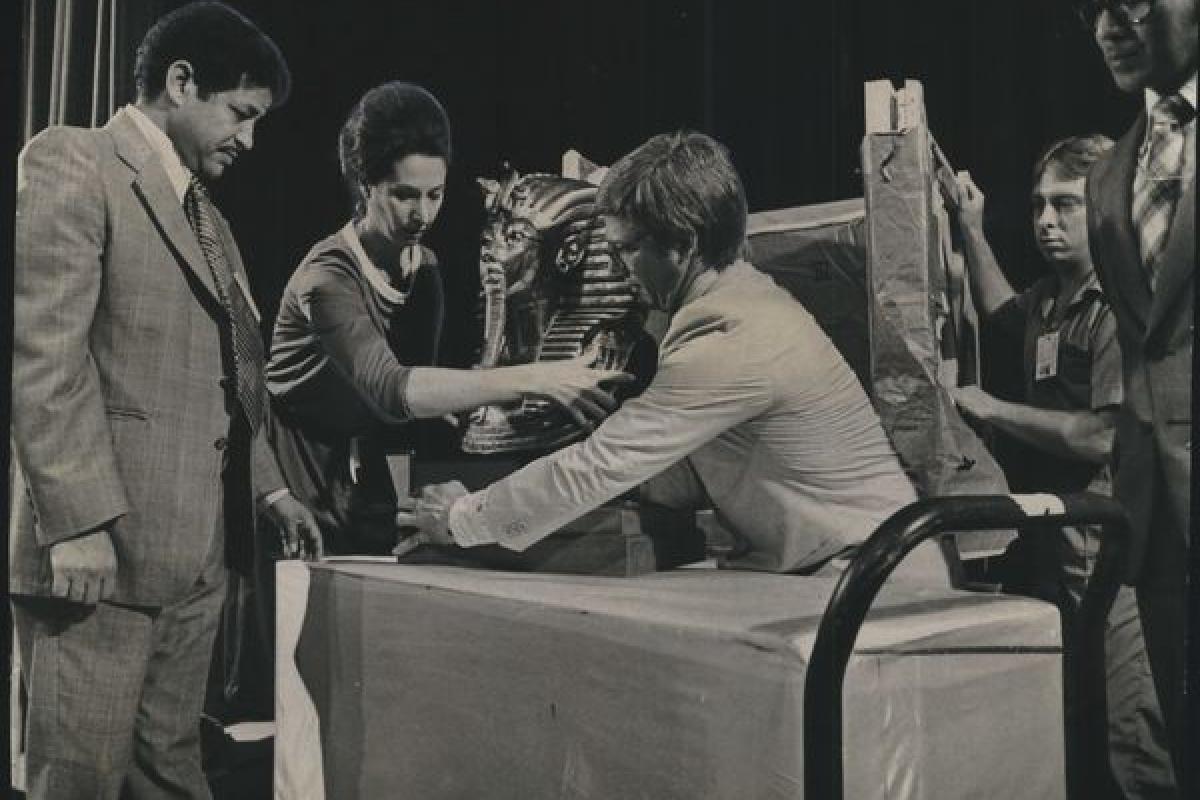 Barbra Hall, center, curator from the University of Chicago, and Yale Kneeland, right, of the New Orleans Museum of Art staff, place the gold death mask of King Tutankhamun on top of a crate during its unpacking at the museum in 1977. At left is Mohamed El Saghir, director of antiquities for Upper Egypt at the Cairo Museum.

Chairman Jon Parrish Peede wrote the following column for The Times-Picayune of New Orleans; the original publication can be found here.

In the fall of 1977, my three brothers and I stood in a hot line with other well-dressed kids and endlessly patient parents waiting for hours to enter the Treasures of Tutankhamun exhibition at the New Orleans Museum of Art. The delay did not bother me, as I had no particular desire to be attacked by a mummy. My older brothers had assured me that such misfortunes often happened.

The six-city King Tut exhibition led to the start of the blockbuster shows now common in our nation. As a boy, I didn’t know that the exhibition was supported by the National Endowment for the Humanities. Now that I have the honor of leading the federal grant-making agency, I know firsthand how vital NEH is to underwriting historic preservation and heritage projects, driving cultural tourism and economic development and advancing civic engagement and public education.

Over the past 10 years, NEH has awarded nearly $6 million in direct grants to the state of Louisiana, and an additional $7 million to our state partner, Louisiana Endowment for the Humanities (LEH), to fund its operational expenses, educational programming and grants across the state.

In 2018, NEH established an infrastructure grant category to leverage federal dollars to spur private investment in our nation’s libraries, museums and cultural centers to ensure the long-term health and growth of these institutions. The result of our catalytic funding will be greater access to historical, cultural and educational resources for all Americans.

We are pleased to have awarded $250,000 in matching funds to LEH to convert their first-floor meeting area into an interactive museum and community space. It also will serve as a gallery to present the artwork of John T. Scott.

Other notable NEH grants in recent years include:

A 2018 grant for a reinterpretation of Madame John’s Legacy, an 18th-century French colonial style house in New Orleans;

A 2018 grant to Xavier University to design an undergraduate minor in digital humanities;

A 2018 grant to Tulane University for summer workshops for 72 teachers on “New Orleans: Music, Culture, and Civil Rights”;

A 2016 grant to Historic New Orleans Collection for the traveling exhibition “Purchased Lives: The American Slave Trade from 1808 to 1865”;

A 2016 grant to LEH for weekly reading and discussion programs on the Constitution and civic engagement at 32 sites across Louisiana for at-risk children and their families;

And funding since 2001 for American Routes, based at Tulane University, a nationally distributed radio program that celebrates American vernacular music and culture.

As New Orleans celebrates its 300th anniversary, hundreds of humanities scholars and nonprofit leaders from across the country are in town this week for the National Humanities Conference. I’m proud to join them. We will carry back to our states insights not only from discussions, but also from the cultural laboratory that spreads far beyond the French Quarter in every direction.

This humanities conference is an ideal opportunity to showcase why so many of us who grew up in the Deep South think of New Orleans as a second home. With its singular blend of architecture, dance, music, literature and history, the city highlights the importance of place to a sense of true belonging.

As an editor for much of my career, I could not imagine Southern literature without this city as muse. It welcomed William Faulkner, Eudora Welty, Tennessee Williams, Walker Percy, Ellen Gilchrist, Richard Ford and Jesmyn Ward from my native Mississippi for sojourns long and short. They joined Louisiana’s homegrown greats, from George Washington Cable to Kate Chopin, James Lee Burke to Anne Rice, John Kennedy Toole to Ernest Gaines.

For NEH, the question is not whether we believe there is culture here worth funding. Rather, it is a matter of deciding what to fund next. We welcome new and repeat applicants — even those that risk the inclusion of mummies.

In most cities, a museum exhibition closes “not with a bang but a whimper,” to borrow a phrase from T. S. Eliot. But when the Tut exhibition finally ended after logging more than 850,000 visitors, the Boy King was sent off with a jazz funeral that included both the city coroner and the mayor.

New Orleans isn’t most cities. For 300 years, it has gone its own way. NEH exists to make sure that this tradition continues.