The iconic logo of the Victor Talking Machine Company was known around the world. 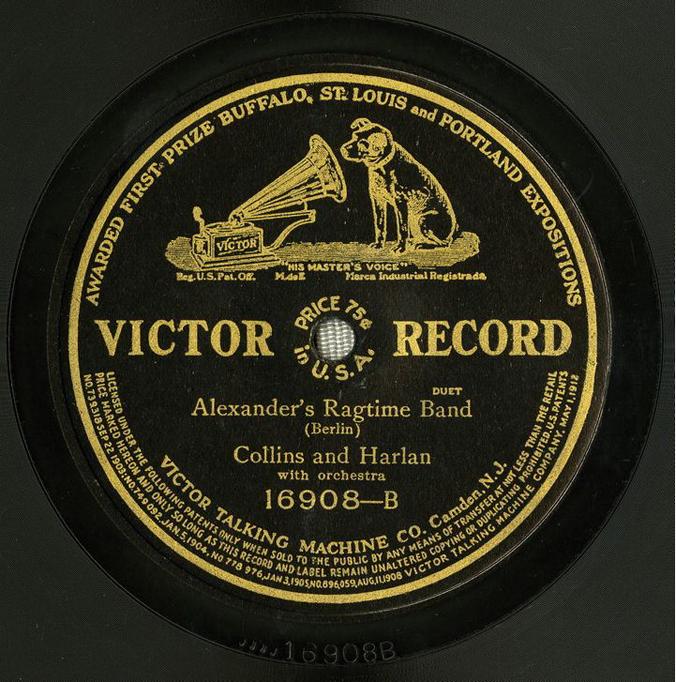 If you had bought an original copy of Irving Berlin’s first runaway nationwide hit, “Alexander’s Ragtime Band,” the label would tell you the title, composer and last names of the vocalists.

That's not a lot of information for an historic tune. But if you look up the same recording on the Library of Congress’ new National Jukebox, you’ll discover that the tune was first recorded on May 23, 1911 in Camden, NJ, featuring the celebrated vocal duo of Arthur Collins (baritone) and Byron Harlan (tenor) backed up by the Victor Military Band.

For even more detail, you can go to the same place that the National Jukebox gets its information: The NEH-supported preservation resource called the Encyclopedic Discography of Victor Recordings (EDVR) . Located at the University of California at Santa Barbara, the EDVR has the ambitious goal of eventually providing a comprehensive database that extends beyond the products of the Victor Talking Machine Company (1901-1929) to the end of the 78-rpm era in the early 1950s.

Look up Berlin’s hit in the EDVR, and in addition to information about that specific recording you’ll find out what else Victor recorded that day (22 other pieces, of which 10 are in Spanish), everything else that Collins and Harlan did for Victor (including the frequently overlooked “Paddle Your Own Canoe” and “Down Where the Sweet Potatoes Grow”), subsequent Victor recordings of Berlin’s hit song, and even oddball variants such as “Alexander’s Bagpipe Band” (1912), among other things.

There are about 10,000 recordings currently available through the National Jukebox, and “when the information contained in the EDVR is combined with the actual recordings in the National Jukebox, our nation’s early sound history comes alive, providing a truly captivating and contextually rich experience,” says Joshua Sternfeld, Senior Program Officer in NEH’s Division of Preservation and Access (DPA), which funds the EDVR.

"Regardless of whether a library is a physical collection or an online digital collection, its foundation is its catalog,” says David Seubert, Curator of the Performing Arts Collection at the University of California at Santa Barbara. And indeed the Jukebox website acknowledges that the EDVR has “had a profound impact” on the project, providing data that “serve as source cataloging for virtually all of the recordings in the National Jukebox.”

Early response to the Jukebox has surpassed expectations: In the first three weeks following its May 10 launch, the site attracted 356,000 visitors who played 738,000 streams of music. Interestingly, one of the most requested songs on the site to date has been “Wreck of the Old 97" by Vernon Dalhart, a huge hit when it was released in 1924. The song, which describes a famously horrendous 1903 mail train crash near Danville, VA, is widely believed to be the first “country” recording to sell a million copies.

Nor are those the only genres. “Besides musical performances,” Sternfeld notes, “Victor recorded many types of spoken works such as literary readings, political addresses, children’s stories, dramatic scenes, voice and language instruction, comic monologues, advertisements, and radio series.” Click here to hear De Wolf Hopper’s stirring 1909 recitation of “Casey at the Bat.”

The EDVR project, which NEH has supported since 2007, adds about 1,000 recordings a month to its database by searching the record company’s own documentation, other collections and sources, and various experts. “It currently provides critical catalog records of sound recordings from 1900 to the 1940s,” says Charles Kolb, a DPA Senior Program Officer.

Recently, EDVR received another NEH grant providing funding through the first half of 2013. That award “will enable us to extend the discography backward as well as forward chronologically,” says Sam Brylawski, Editor of the EDVR. “We'll enhance it by adding the issued recordings of the Berliner Gramophone Company, Victor's corporate predecessor of the 1890's. Berliner records were the first commercial disc recordings and the first sound recordings to be marketed as entertainment in the home, exclusively.”

Searching the EDVR, Sternfeld says, “allows researchers, educators, and recording enthusiasts to reconstruct a ‘sound history’ of the U.S., to see when musical genres such as early jazz or country became popular, which classical composers were most performed and by whom, how commercial influences affected performance decisions, or how technology transformed listening behaviors.”

The Encyclopedic Discography of Victor Recordings is supported by NEH Preservation and Access grants.