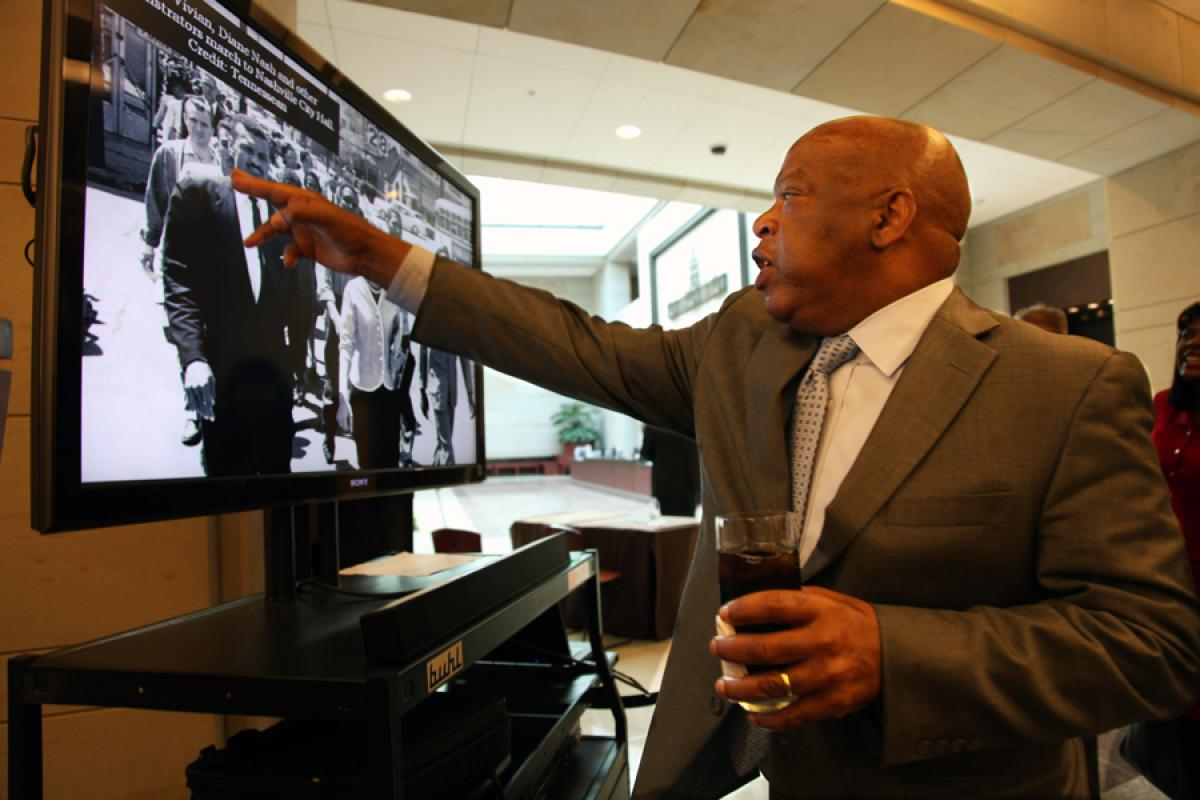 Fourteen veterans of the 1961 Freedom Rides protesting segregation in interstate travel were honored April 13 at a screening in Washington D.C of a new NEH-funded film, Freedom Riders, hosted by the Congressional Black Caucus and the National Endowment for the Humanities for members of Congress and their staffs.

The Freedom Riders documentary, by award-winning filmmaker Stanley Nelson, tells the story of the more than 400 black and white civil rights activists who risked violent attacks and imprisonment in their efforts to desegregate bus lines between Washington, D.C. and New Orleans. Based on a book by historian Raymond Arsenault, the film was produced by WGBH and the American Experience series with support from the National Endowment for the Humanities. Freedom Riders premieres nationally on PBS on May 16th, a few days after the fiftieth anniversary of the first bus departure from Washington.

The film screening at the U.S. Capitol Visitor Center followed introductions by Representative Emanuel Cleaver of Missouri and Representative John Lewis of Georgia—himself a Freedom Rider—who honored all the Freedom Riders for their courage and sacrifice.

Rep. Emanuel Cleaver, Chairman of the Congressional Black Caucus, praised the Freedom Riders for their commitment to nonviolent protest.

“Almost every movement that has taken place since the civil rights movement received its mojo from the men and women you will see tonight,” said Rep. Cleaver, Chairman of the Congressional Black Caucus.

Rep. Lewis, who was a seminary student in 1961, was beaten unconscious and imprisoned for 40 days in Mississippi State Prison for taking part in the Freedom Rides. At the event, he thanked his fellow Freedom Riders for helping dismantle the infrastructure of racial inequality. “Those signs that said ‘White Men,’ ‘Colored Men,’ ‘White Women,’ ‘Colored Women,’” said Rep. Lewis. “Thanks to you, those signs came tumbling down. Thanks to you, our children will only ever see those signs in history books, in films, in museums.”

Both men extended special recognition to fellow Congress member, Representative Bob Filner of California, who also participated in the Freedom Rides and spent 61 days in Parchman prison in Mississippi for disturbing the peace. Other former Freedom Riders honored during the event were Wyatt Tee Walker, Dion Diamond, Joan C. Browning, the Reverend Reginald Green, Joan Mulholland, El Senzengakulu Zulu, John Moody, Catherine Burks-Brooks, Doratha Smith Simmons and Claude Reese. They were joined by Moses Newson, who covered the rides for the Afro-American Newspapers chain in Baltimore, and Theodore Gaffney, who was on the first Freedom Ride bus as a photographer for Jet magazine.

For more information about the film and associated events, see the website at http://www.pbs.org/wgbh/americanexperience/freedomriders/.

The Freedom Riders documentary was produced with support from a $1,000,000 NEH America's Media Makers Production grant, awarded in 2008.