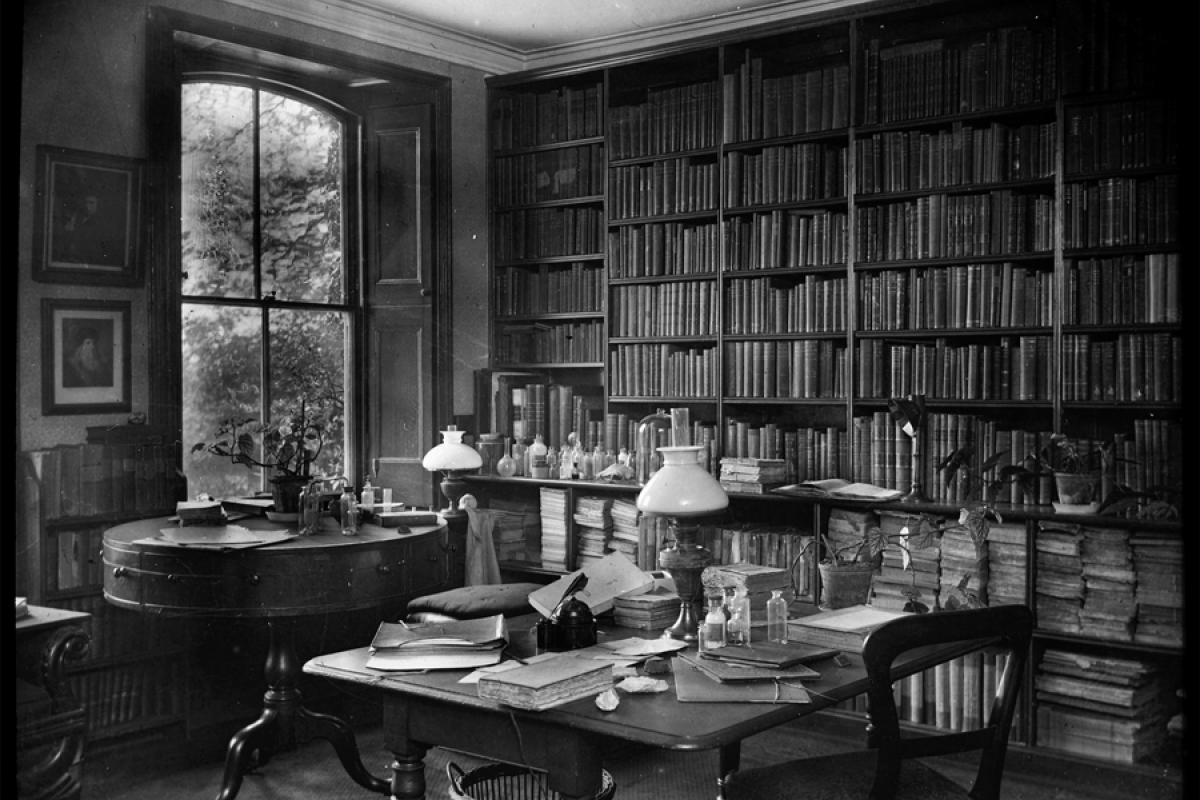 Darwin's study as it looked during his lifetime. 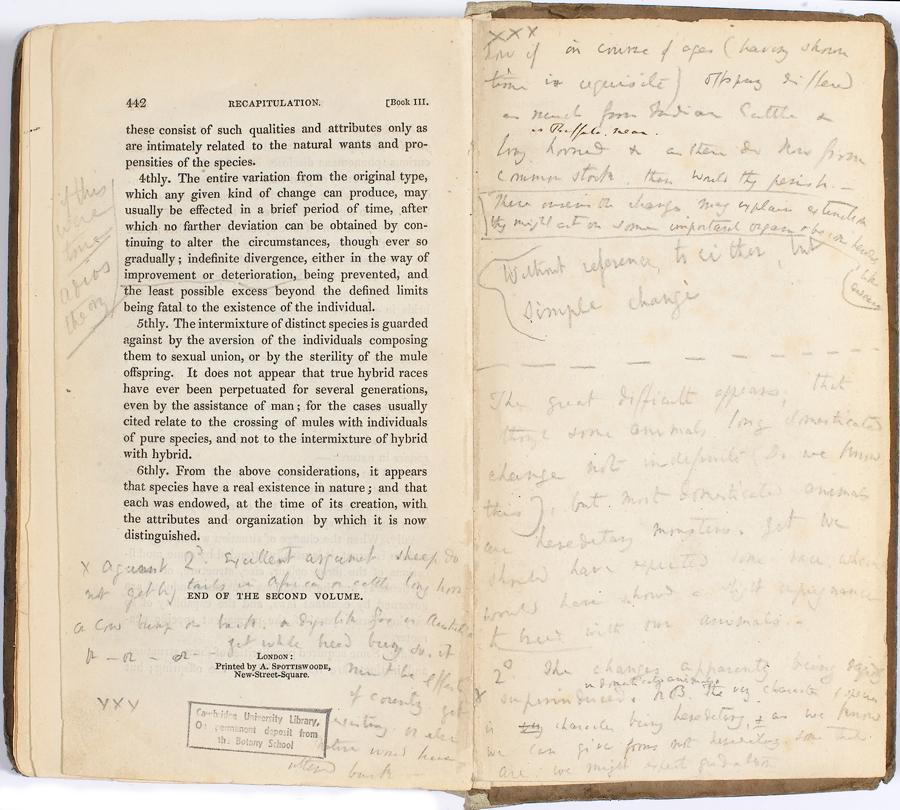 Darwin made copious notes in his books. This sample is from Charles Lyell's Principles of Geology

Notes and comments hand-written by Charles Darwin on the pages and margins of the books in his personal library are now available online for the first time, enabling new insights into the great naturalist’s thought processes and the development of the theory of evolution.

Darwin’s scientific library comprised 1480 books, of which 730 contain abundant research notes in their margins. All the annotated books are in the process of being digitized, resulting in high-resolution images of each book’s pages showing Darwin’s handwriting along with a transcription of the notes in a companion panel. (See image at bottom of page.)

The first phase of the project has just been completed, with 330 of the most heavily annotated books now accessible online at the Biodiversity Heritage Library for all to read. The page images can be manipulated and magnified, and the view can be adjusted to show a single page or two adjacent pages. Direct links are provided to related annotations, and the site enables users to search all the annotations in the books by word or phrase.

“When completed, the collection will enable people to retrace Darwin’s intellectual footsteps, which isn’t possible through reading his own writings alone,” said Joel Wurl, Senior Program Officer at the National Endowment for the Humanities (NEH) Division of Preservation & Access, which co-funded the project. “Having access to his entire scientific library, with his annotations, means that someone can understand much more fully which ideas shaped his thinking and why. And it is being made available for anyone to use freely.”

Digitizing the volumes, the majority of which are held at Cambridge University Library, is a collaborative effort involving Cambridge, the Darwin Manuscripts Project at the American Museum of Natural History, the Natural History Museum, and the Biodiversity Heritage Library. It is supported jointly by NEH and the Joint Information Systems Committee in England.

Cambridge University Librarian Anne Jarvis said: “The Darwin collections are among the most important and popular held within Cambridge University Library. While there has been much focus on his manuscripts and correspondence, his library hasn’t always received the attention it deserves — for it is as he engaged with the ideas and theories of others that his own thinking evolved.”

“I do not believe it is appreciated, not even by contemporary biologists, how much of Darwin’s theorizing depended, not on immediate experience, but on books,” said Robert J. Richards, Morris Fishbein Professor of the History of Science at the University of Chicago. “These books provide [an] Ariadne’s thread by which scholars might move from the dark and deep recesses of his theory to the light of understanding how he did it.”

Because Darwin’s evolutionary theory covered so many aspects of nature, reading served him as a primary source of evidence and ideas. Darwin once complained that he had become a “machine for grinding general laws out of large collections of facts.” The pages of Darwin’s Library give readers a direct view of the great Darwinian intellectual machine in action.

Most of Darwin’s personal library rests at Cambridge University Library and at Down House, Darwin’s home in Kent. Although the majority of the books are scientific, some are humanities texts on subjects that Darwin transformed into scientific topics.

The images of the annotations and the series of transcriptions accompanying each page allow everyone to see which passages Darwin found relevant to his work, stimulated his thinking, or just annoyed him as he read the work of others.

For example, his friend Charles Lyell wrote in his famous Principles of Geology that there were definite limits to the variation of species — an idea at odds with Darwin’s concept of evolution. Darwin wrote alongside this: “If this were true adios theory.”