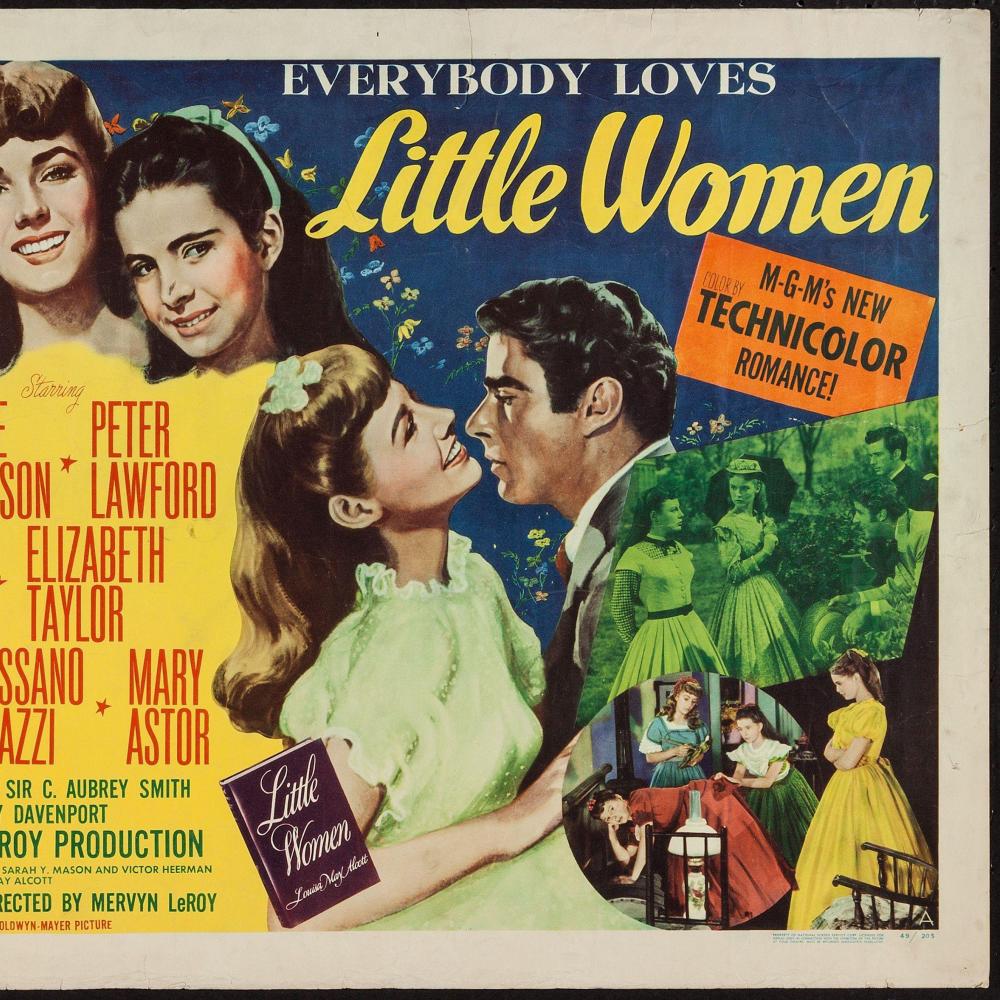 Movie poster for the 1949 version of Little Women.

Ever since Henry James’s essay “The Art of Fiction” in 1884, if not before, critics and readers have tried to determine whether or not certain novels deserve the status of art and are thus worthy of the label “literature.” PBS’s new series The Great American Read, based on its survey of Americans’ most-loved novels, has again raised questions about what qualifies as “literature.” Adam Kirsch, in the Wall Street Journal, has noted the absence of “books that are usually supposed to constitute American literature,” such as the novels of Phillip Roth, Jonathan Franzen, or Joyce Carol Oates. Instead, the PBS list is full of books we loved as children, which, he suggests, are not really literature.

One of the novels on that list is the much beloved novel for girls Little Women by Louisa May Alcott. Part one of Alcott’s story of the four March sisters growing up in the shadow of the Civil War was first published one hundred fifty years ago on September 30, 1868. The novel follows Meg, Jo, Beth, and Amy from adolescence, while their father is away at war, into adulthood, as they learn to accommodate their dreams of fame and wealth to more realistic goals. Questions about whom or whether they will marry dominate the second part of the novel, first published in April 1869.

Alcott had previously published in a variety of genres, including a serious novel for adults, stories in the Atlantic Monthly, and sensational thrillers published under the pseudonym A. M. Barnard. But once this daughter of the Transcendentalists (among her family’s closest friends were Emerson and Thoreau) published Little Women, a novel she wrote only grudgingly at the request of a publisher, she wrote almost exclusively for children thereafter.

The first children’s novel she wrote was always her most famous, however. I know from my research how dearly generations of readers have cherished Little Women, but not for the reasons that Kirsch identifies as the appeal of most of the nonliterary novels on the The Great American Read list. In fact, I have found that the novel is less popular with young readers today precisely because of its slow pace, difficult language, and realism.

Yet it routinely appears on lists of Americans’ favorite novels. Why? In short, young female readers have deeply identified with one or more of the March sisters, whose distinct personalities gave them individuality, something girls were rarely granted in literature. Generations of girls have wondered, which one am I—Meg, Jo, Beth, or Amy? Which one do I aspire to be? Providing girls with a way to understand themselves as they grew into young women, particularly if they felt different from other girls, as Jo does, has made Little Women a book to grow up on, one that girls read over and again until it fell into rags.

However, legions of fans (especially if they are girls) and nostalgic attachment never won the label “literature” for any novel. Putting aside the question of how literature for women and girls has been marginalized in our culture, and thus rarely granted the status of literature, I would like to consider the history of Little Women’s literary status and make a case for why it deserves the respect that label bestows.

First of all, it’s important to recall that Little Women has had a much wider audience than given credit for. When Little Women was first published, it became an instant best-seller, and not only among girls. As a friend of the author later recalled, Little Women was “the rage in ’69,” with everyone from children to grandparents reading it. “Grave merchants and lawyers meeting on their way down town in the morning said to each other, ‘Have you read Little Women’; and laughed as they said it. The clerks in my office read it, so also did the civil engineer, and the boy in the elevator.” Its widespread appeal is reflected in the fact that mainstream publications reviewed it, such as Harper’s and The Nation, as well as The Spectator and The British Quarterly in England. Initial reviews called it “a very readable juvenile book” and “a lively story for the young,” but by the publication of part two in April 1869, Little Women was viewed more as a story for the whole family. Harper’seven considered it “a rather mature book for the little women, but a capital one for their elders.”

In fact, it is worth remembering that the book we now think of as Little Women is really two books (and is still published in two volumes outside America). Part one is about the girls from age twelve to sixteen, and part two is about them growing up, making it more of what we could call a young-adult or coming-of-age novel (a category that is often considered literary—think Adventures of Huckleberry Finn or The Catcher in the Rye).

Over the course of the twentieth century, as American literature became the subject of study by academics, Little Women held an uneasy place on the margins of our national literature. Critics largely ignored it, no doubt feeling, as G. K. Chesterton did in 1907, that, as a man, “I am the intruder, . . . and I withdraw.” When critics, who were overwhelmingly male, bothered to notice the novel at all, they felt free to dismiss it, as Edward Wagenknecht did in his influential 1952 survey, Cavalcade of the American Novel. Little Women “needs—and is susceptible of—little analysis,” he wrote.

Meanwhile, Little Women was a staple in the nation’s schoolrooms. In 1933, when the film starring Katharine Hepburn hit cinemas, the National Council of Teachers of English distributed study guides to all of the nation’s nearly 18,000 high schools, in consideration of the fact that Little Women “has been a prescribed reading course in the schools of the country,” as one commentator said. During the Second World War and its aftermath, Little Women ventured even further. It was sent overseas as a book that represented American democracy and, as one reporter put it, the “American way” soldiers were fighting for.

Yet Little Women lost its popularity among general readers at precisely the same time it began to gain significance for literary scholars. The women’s movement of the late 1960s and 1970s made readers look differently at a novel that portrayed not only family life but the development of young women. Academics, who now included feminist critics, took notice and began to publish serious analyses of the novel. Suddenly, Little Womenwarranted close scrutiny and began to appear in the adult “literature” section in book stores, newly available in editions with scholarly prefaces and devoid of illustrations.

The most important sign of a work’s literary status—what makes it last rather than fade away—is that it engenders analysis and debates not easily resolved. That is exactly what Little Women has done since the 1970s—and continues to do—in essays from the New York Times to Buzzfeed to the scholarly journal College Literature. There is to this day no consensus over whether the novel is a realistic or a sentimental portrait of American family life, or whether its portrayal of women is progressive or regressive. Jo’s marriage to Professor Bhaer, and her marriage at all, continues to draw wildly different readings. Jo herself appears in critical essays as a tomboy, closeted lesbian, proto-feminist-cum-domestic-drudge, or progressive reformer. Marmee tends to be viewed by critics as either a tool of the patriarchy or a forward-thinking egalitarian. Evidence from the novel can be marshalled to support any or all of these and many other claims. As the critic Margo Jefferson has written, Little Women is “a divided house of a book, [that] still stands, ramshackle[,] worn and full of life.”

Ultimately, what scholars and critics who have paused to read Little Women carefully have realized is that it is much more complex than Wagenknecht or any of his ilk could recognize. And there are no signs of the critical engagement with Little Women ending anytime soon. There is still so much to examine as we, for instance, reconsider Amy in light of today’s young women feminists or look at Beth through our contemporary understanding of social anxiety. As we evolve as a culture and as a species, we notice new things in the novel that we hadn’t seen before.

Little Women is much more than a perennially beloved girls’ book. That alone would make it still worth reading, adapting into films, and talking about. But it’s also time we recognized how much its portrayal of girls growing into women is anything but simplistic and sentimental. And yes, how this classic of women’s literature deserves to be considered an important “literary” work, one that we can read and discuss and even argue over for another one hundred fifty years.

Anne Boyd Rioux is the author of Meg, Jo, Beth, Amy: The Story of Little Women and Why It Still Matters, published in August 2018 by W. W. Norton & Company. She has also written Constance Fenimore Woolson: Portrait of a Lady Novelist, named one of the ten best books of the year by the Chicago Tribune. Both projects were supported by National Endowment for the Humanities fellowships. She is a professor of English at the University of New Orleans.

Anne Boyd Rioux received an NEH Public Scholar grant for the research and writing of Meg, Jo, Beth, Amy: The Story of Little Women and Why It Still Matters, published in August, 2018, by W. W. Norton & Company.

This article is available for unedited republication, free of charge, using the following credit: “Originally published as "Taking Little Women Seriously" in the Summer 2018 issue of Humanities magazine, a publication of the National Endowment for the Humanities.” Please notify us at @email if you are republishing it or have any questions. 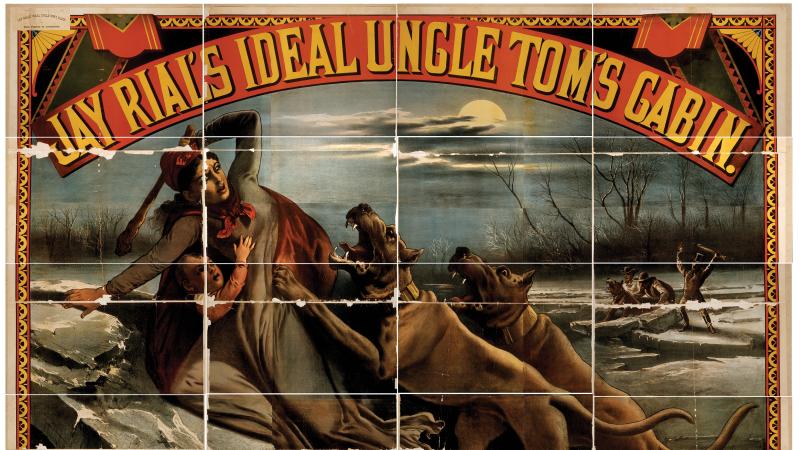 It was Uncle Tom's Cabin.