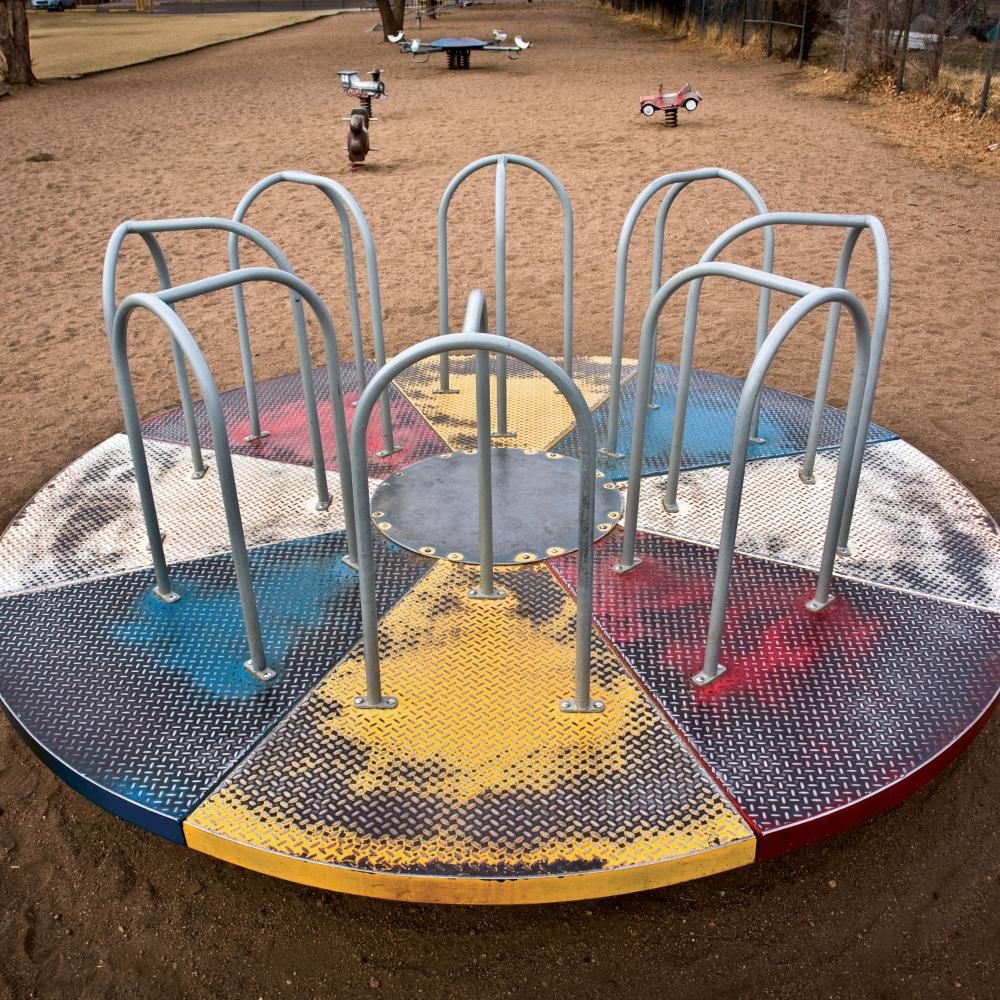 Vintage merry-go-round from a playground in Cañon City, Colorado.

Playgrounds seem to be made for fun, but does more time on a teeter-totter equate to less time in a reformatory? Can teamwork learned on a child-propelled merry-go-round and patience from waiting turns on a slide lead to better communities? 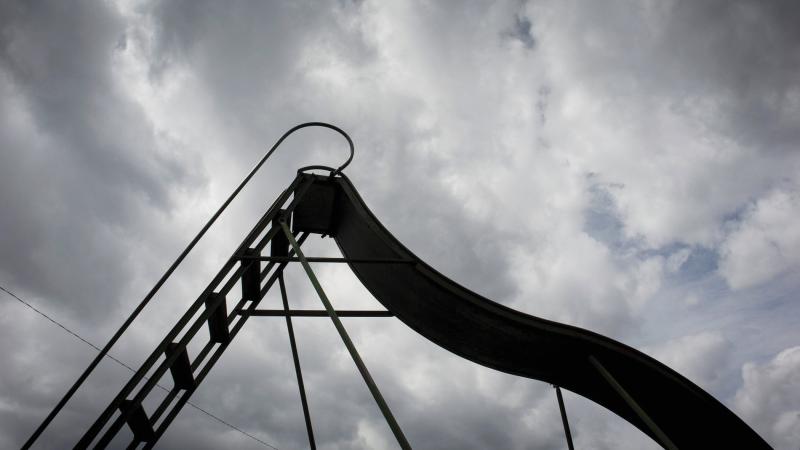 A slide in Gunnison, Colorado 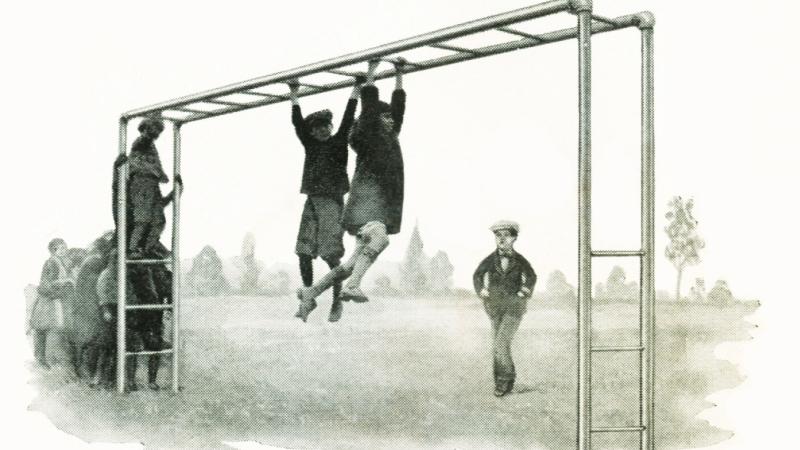 The Giant Manufacturing Company advertised its Junior Horizontal Ladder in 1931.

Playground equipment manufacturers routinely made such claims in catalogs touting the social, physical, and moral benefits of their products. “Better the playground and trained leaders than reformatories and uniformed guards,” proclaims a 1926 advertisement for a Studebaker Park Combination playland from The Ashland Mfg. Co. in Ashland, Ohio. “Good-bye Juvenile Court,” reads another.

The earliest American playgrounds were more like large sand gardens, similar to those popular in Germany in the late 1800s. Swings, slides, and climbing bars were added. Instructors often led children in organized play.

Playgrounds at schoolyards and city parks helped socialize America’s new immigrant population and gave generations common community landmarks in the early days of the twentieth century. The Playground Association of America was formed in 1906.

“The rocket is not leaving,” says Deborah Baker, curator of collections at the Edmond Historical Society & Museum, where the exhibit “Once Upon a Playground” opened early this year.

A rocket slide, installed in the 1960s, anchors Stephenson Park, where Edmond’s Depression-era Armory building houses the museum and traveling exhibit. While the park is scheduled for a makeover, the rocket slide will stay.

“People don’t know us as the historical society or Stephenson Park,” she says. “They know us as ‘Rocket Park.’”

The ExhibitsUSA traveling exhibit features playground photographs by Brenda Biondo and historic photos selected by Carol Johnson. It is a collaboration with the Mid-America Arts Alliance, the National Endowment for the Humanities, and is showing in Edmond with support from Oklahoma Humanities.

Across the country vintage playground equipment has been scraped, scrapped, and replaced, mostly in the interest of safety. Early apparatus makers used steel and wood to give children repeated thrills and escape the austerity of the times.

Miracle Recreation Equipment Company in Grinnell, Iowa, sold 353 different pieces of playground equipment. In 1975, their product line included pieces such as tornado slides, Astro City, a spaceship, jet interceptor and the satellite, and an all-pipe climbing toy. The centerpiece was the Mark IV, a multi-station apparatus that “handles a whole neighborhood of children.”

The colors of the playground—red, pink, orange, green, yellow and blue—were not chosen at random. A three-year study by a West German psychologist found a child’s mental and emotional development were improved by colors they prefer, according to the company’s literature.

Despite many a child’s memory of skinned knees, bleeding chins, and hard landings from flying off a self-propelled merry-go-round, safety warnings were missing on many early catalogs. By 1975, however, products stressed consumer safety. One urged buyers to pave the surface under the “Miracle Lifetime Whirl,” to prevent curious children from burrowing underneath the whirler platform.

Photographer Biondo’s work, featured in her book, Once Upon a Playground—A Celebration of Classic American Playgrounds, 1920–1975, matches her own photographs of vintage equipment with catalogs. Her cocurator, Carol Johnson, is a retired curator of photography at the Library of Congress.

The book was published in 2014 by University Press of New England. Biondo began researching and photographing the apparatus after noticing the type of playground equipment she loved as a youngster was missing from neighborhood parks.

“I was at a playground and my one-year-old daughter was playing in the sand box, and I noticed all the new, plastic equipment and I got to thinking about the things I played on and started wondering if any of that still existed,” Biondo says. “I started driving around the local parks and realized that it was disappearing from the landscape very quickly.”

That interest in documenting that era of playground equipment led to seven years of travel and photography. Weekend drives, vacations, and trips to surrounding states became part of the hunt. Every town and city along her route got a quick look.

She found vintage pieces remaining mostly in older, less affluent communities that couldn’t afford to or had no interest in replacing them. If a town had fewer youngsters, that meant there was less demand to upgrade.

Equipment design changed dramatically in the 1970s as federal guidelines offered suggestions on height, spacing, and safety. Formation of the Consumer Product Safety Commission in 1972 and early computer tracking of playground accidents changed the landscape as architects and equipment designers built more safety into their products. An early CPSC publication established guidelines for public playgrounds. It wasn’t required, but manufacturers feared liability issues if they didn’t meet the guidelines.

The designers’ emphasis on safety may have come at the expense of creativity. Kids get bored easily with less challenging playground toys, points out Biondo.

“And there has been some research that shows the number of playground injuries hasn’t changed that much over the years,” Biondo says. “Kids are pretty good about assessing danger.”

This article is available for unedited republication, free of charge, using the following credit: “Originally published as "The Playground in American Life" in the Spring 2018 issue of Humanities magazine, a publication of the National Endowment for the Humanities.” Please notify us at @email if you are republishing it or have any questions.