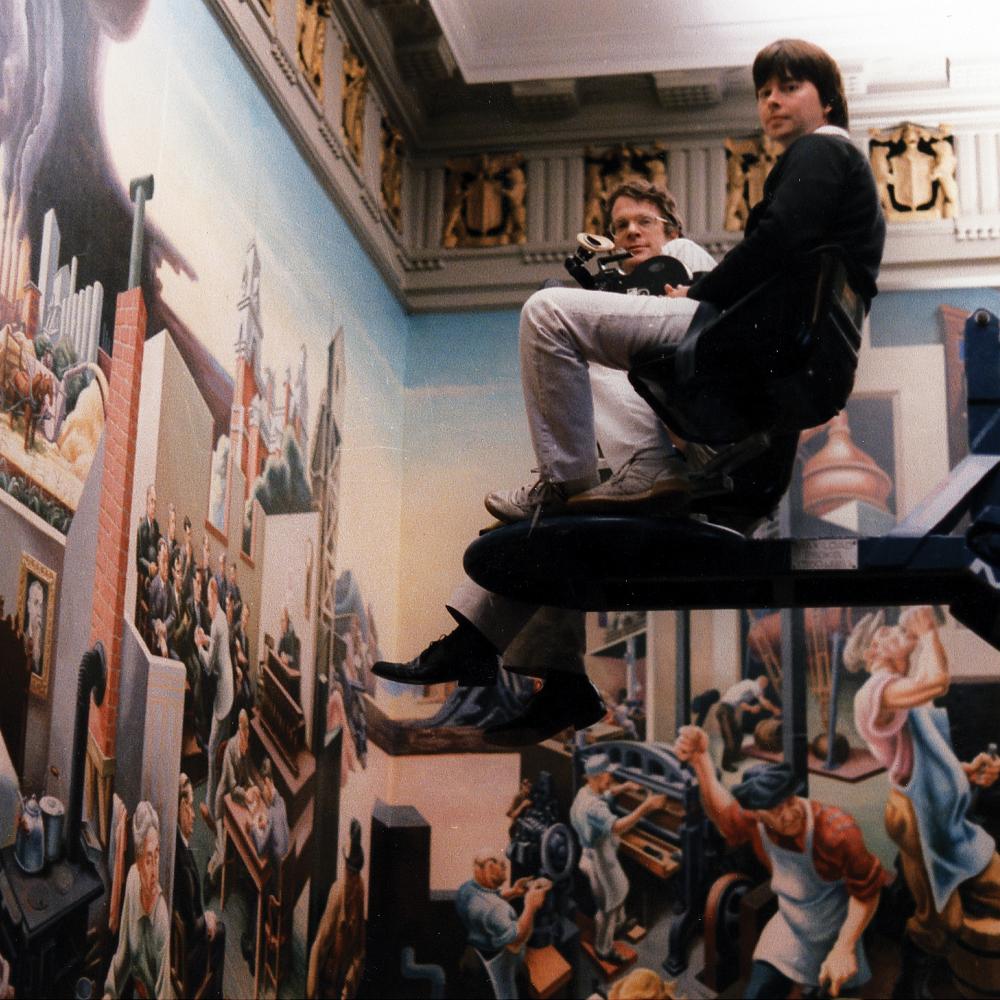 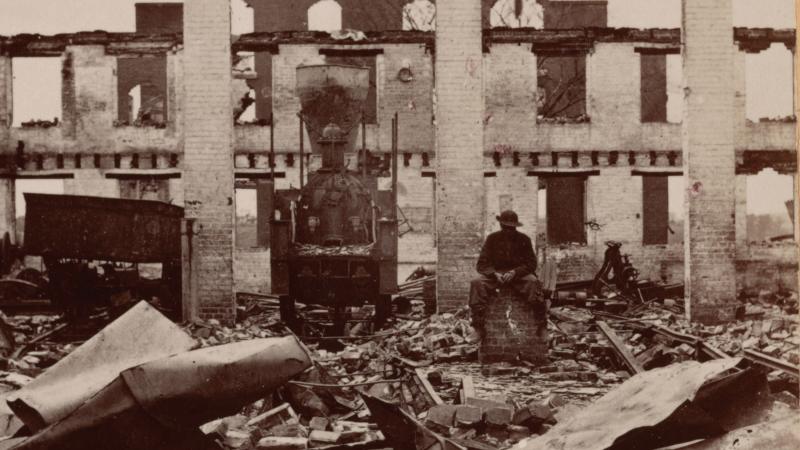 An image in The Civil War captures the desolate ruins of Richmond, Virginia. 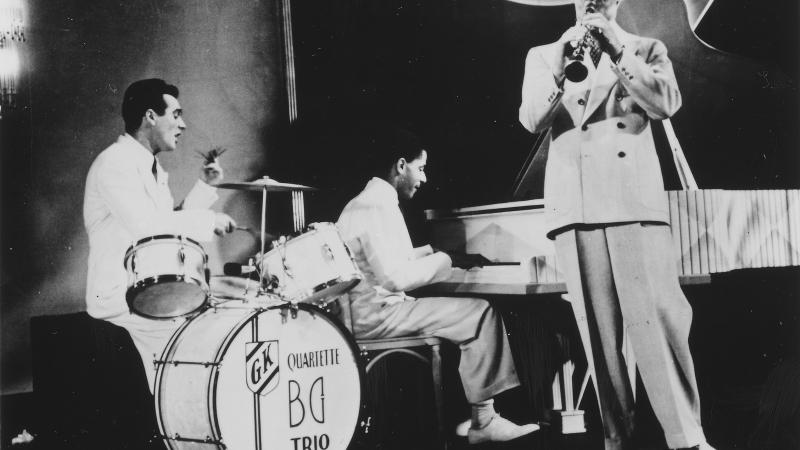 Benny Goodman and his trio in Jazz, which exemplified Burns's biography-driven approach to history.

—Courtesy of the Frank Driggs Collection

Ken Burns’s one-hour debut chronicled the bridge’s construction and discoursed elegantly on its cultural significance as an architectural sonnet to beauty, function, and daring. With urban historian Lewis Mumford and playwright Arthur Miller, Brooklyn Bridge was directed and produced by Burns, who also shot this Oscar-nominated film. Already in place were third-person voiceover narration, the dramatic handling of old photos, first-person text voiced by professional actors, in short, the main elements of Ken Burns’s mature filmmaking. 58 minutes. (Also funded also by the New York Council for the Humanities.)

THE SHAKERS (1985) (codirected by Amy Stechler)

The Shakers begins with live film of a chair and a chest of drawers catching sunlight from a nearby window as we hear the words of Thomas Merton: “The peculiar grace of a Shaker chair is due to the fact that it was made by someone capable of believing that an angel might come and sit on it.” Less a full retelling of Shaker history than a passionate distillation, the documentary expressed many a sentiment about craftsmanship that might be applied to Ken Burns, who began collecting quilts after making this short feature. 57 minutes. (Funded by the state humanities councils of Kentucky, New Hampshire, New York, and Massachusetts.)

Ken Burns’s first biographical documentary was built on priceless footage of Huey Long at the podium and jaw-dropping interviews with admiring Cajuns, old hangers-on, and upper-crust Southerners who loathed the Kingfish, as he was known. This telling of the Louisiana politician’s stunning ascent and shocking assassination fills an essential gap in the American library of Machiavellian leadership, a nonfiction supplement to Edwin O’Connor’s The Last Hurrah and Robert Penn Warren’s All the King’s Men. 88 minutes.

The opening title card reads, “Thomas Hart Benton painted America,” and so he did, in large pictures of gunslingers, showgirls, and farmhands depicted in a runny, rawboned style partly inspired by the motion picture industry. Benton had his heyday in the 1930s and was as famous for his putdowns as he was for his murals, and so might have appreciated this film’s plenitude of barbed commentary. Art critic Hilton Kramer played one of the spoilsports: “I don’t think popularity can be cited as a standard of achievement in art.” 85 minutes.

Antebellum Ken Burns was an acclaimed auteur with a handful of documentaries to his credit. After The Civil War, he is called an American Homer and this his Iliad. Upwards of 40 million viewers saw its first broadcast. To celebrate NEH’s 25th anniversary, which occurred in the same month, NEH Chairman Lynne Cheney screened clips for a Washington audience of Cabinet secretaries, generals, and members of Congress. Years later, Colin Powell wrote that he couldn’t get his copy of the film back after he lent it to President George H. W. Bush. 11.5 hours.

This documentary tells the ornery origins story of radio and radio “broadcasting,” the latter term said in the film to be taken from the analogy of a farmer casting seeds in a wide arc to cover a large area. The tale begins with Lee de Forest and Edwin Howard Armstrong, two stubborn inventors sparring over patents in court, while the prize for building the first radio network went to Darvid Sarnoff, a young executive at RCA. Memorable interviews with Red Barber and Garrison Keillor show Burns’s increasingly light touch with personal testimony. 100 minutes.

Divided into nine innings, the series begins with the sport’s misty nineteenth-century origins. Initially conceived as a ten-hour production, it expanded to 18 hours plus after Burns discovered the riches of history at his disposal. A telling as jaunty as “Take Me Out to the Ball Game,” the series featured many a sportswriter and a seemingly infinite trove of beautiful vintage photos, but found its minor key in the trials of Jackie Robinson. 18 hours.

Burns’s fascination with the American artist and the built environment combine in a two-hour biodoc about the great architect. The slow revelation of old photos and first-person testimony in other Burns’s films find their parallel in images of a fireplace, a hallway, a dining room, and masterpieces such as the Guggenheim Museum and Fallingwater. Costarring the engrossing life story of a deeply flawed man. 2.5 hours.

Scholar Gerald Early said on camera, in Baseball, that in two thousand years American civilization would be remembered for the U.S. Constitution, baseball, and jazz. Inspired by this comment, Burns told the sprawling history of America’s great indigenous musical genre, from the minstrel shows of the nineteenth century to the splintering scene of the 1960s, in a contrapuntal narrative highlighting the genius of Louis Armstrong amid wave upon wave of innovation. The lively commentator and expert witness Wynton Marsalis illustrates musical concepts, horn in hand. 19 hours.

The film expresses Burns’s deep faith in the historical significance of major events as experienced by the ones who don’t make it into the textbooks, the foot soldiers and the people back home. Conceived as the story of four representative American towns and their draftees, The War made superlative use of surviving veterans and local angles. Though criticized for its exclusive focus on the American perspective on World War II, it remains a moving testimony to the ordeals of war and the courage of American soldiers. 15 hours.

Set in the heart of a period Burns and company have covered in several films, Prohibition achieves a richness of tone more commonly seen in the later films. With the help of historians Michael Lerner and Catherine Gilbert Murdock, along with journalist Daniel Okrent, the film traces the dry movement from its roots in nineteenth-century temperance campaigns, across tangents to abolitionism and the fight for women’s suffrage, before reaching the notorious 21st Amendment: “Virtually every part of the Constitution is about expanding human freedom, except Prohibition,” says a gravelly voiced Pete Hamill. 5.5 hours.

Ken Burns once wrote that he sought to “nourish the witness.” The witnesses in The Dust Bowl were survivors of this Depression-era man-made calamity, old men and women who as children had known the “brown world” of wind-churned earth. They knew what it was like to lose their crops and find their farms beached in sand. On camera, Floyd Coen recalls suffering from “dust pneumonia,” and watching his little sister’s body carried out on a table leaf. 4 hours.

THE ROOSEVELTS: AN INTIMATE HISTORY (2014)

One of the few Burns films to carry a subtitle, The Roosevelts is the first and only family biography in the Burns oeuvre. Triangulating among Theodore, Eleanor, and Franklin, this touching tryptic emphasizes the inner lives of its subjects amidst the triumphs and travails of the extended clan, as close to a royal family as American history has known. Considered one of the best of Burns’s films, it makes particular use of longtime collaborator Geoffrey Ward, who wrote the script and is the author of two books on FDR. 14 hours.

Ken Burns and crew traveled a great many air-miles to tell both sides of the story, the American and the Vietnamese, and Burns believes he has the goods to upset a lot of conventional wisdom on this polarizing piece of history. A short clip of the film’s opening suggests a major departure from his earlier work. The rock ‘n’ roll soundtrack, modern photojournalism, and a catchy opening sequence show us the master of nonfiction historical documentaries working a terrain more commonly associated with Francis Ford Coppola and Oliver Stone. Approximately 18 hours.