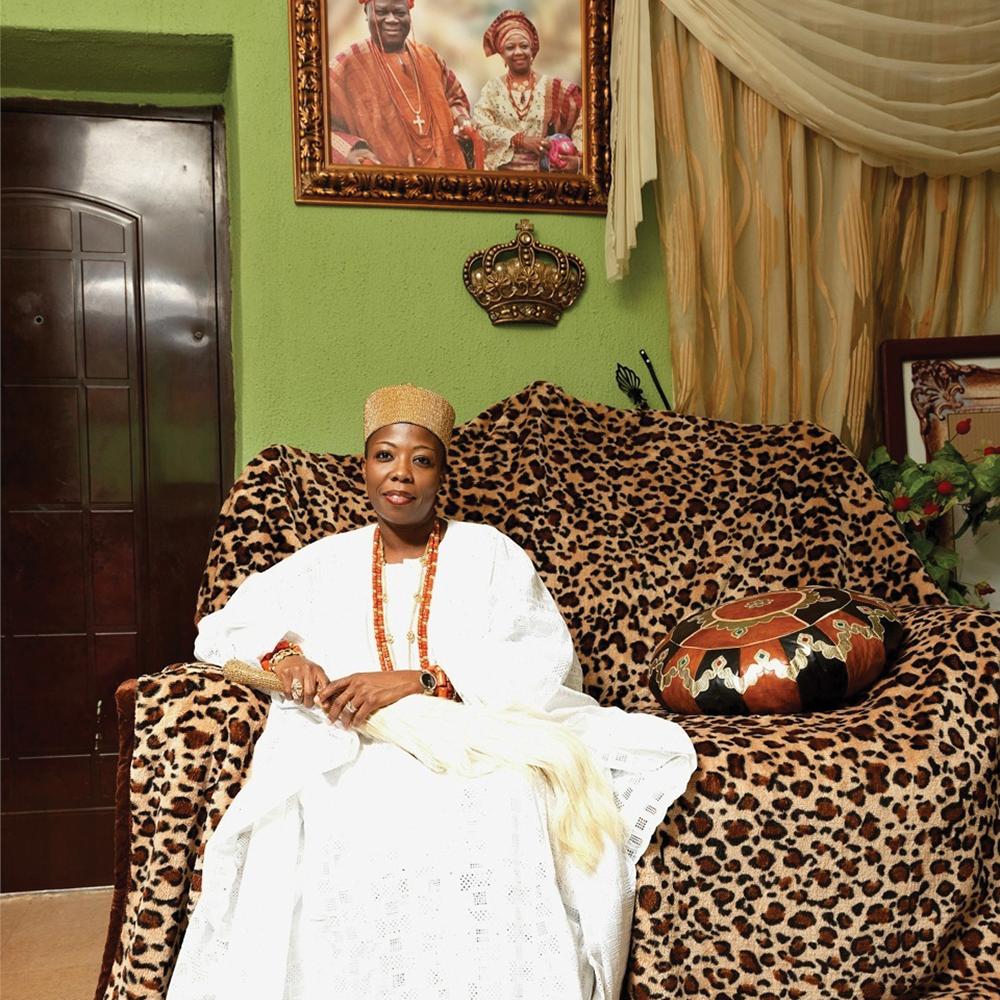 The images are large and lush, startling in their near life-sized appearances. You feel as if you are in the same rooms as these elegantly dressed and somewhat mysterious men and women. Just who are these regal figures from what we know as the modern African nation of Nigeria?

They are elderly men who are descendants of tribal kings and who trace their monarchies to the fourteenth and fifteenth centuries. There is a young woman of thirty-seven, a pharmacist in Texas, who stepped in as regent of a kingdom when her father died a little more than a year ago. Some have PhDs in economics, or law degrees, or business degrees from Stanford and Columbia. And there is Queen Hajiya Hadizatu Ajmedu, magajiya of Kumbwada, the latest in a line of six generations of women to rule a small Muslim community in northern Nigeria. The queen succeeded her grandmother, who died in 1998 at the age of 113, and she is known, we are told, for her advocacy of women’s education.

They are portrayed in an exhibition of photographs by George Osodi, “Royals & Regalia, Inside the Palaces of Nigeria’s Monarchs,” on view at the Newark Museum with support from the New Jersey Council for the Humanities. 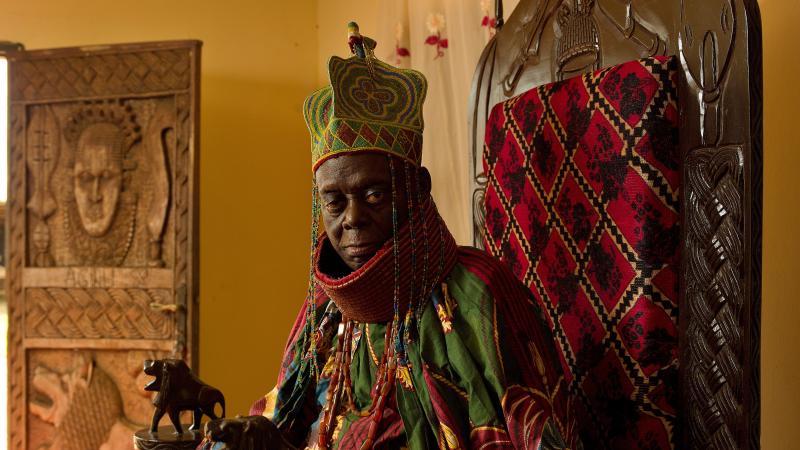 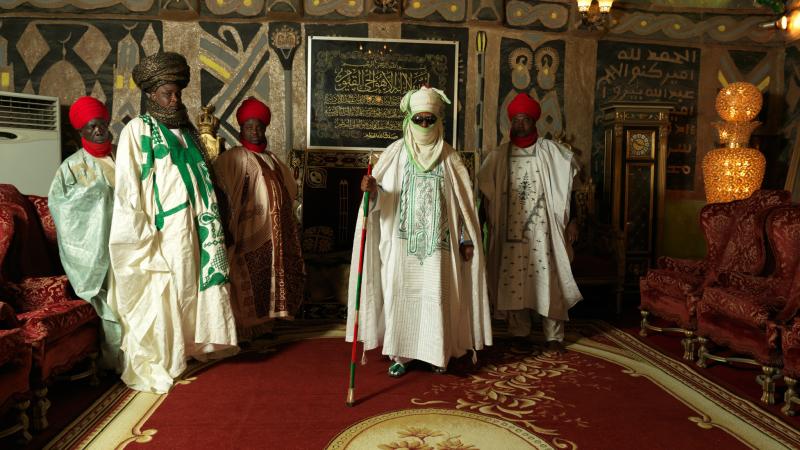 The exhibit teaches about a critical part of an African culture subsumed by British colonial rule when hundreds of tribal kingdoms were merged more than one hundred years ago to form the artificial boundaries of Nigeria. These royal families have no constitutional standing, but enjoy a significant personal importance within their communities. They are figures who hold great political and social influence, serving as crucial go-betweens for their communities and the central government, and in Osodi’s view helping to forge a national unity by the very nature of their great diversity.

“Modern Nigeria is still made up of different groups of people and religions who have their own monarchs, and these monarchs are still important within the Nigerian landscape,” says Osodi. “They are used by the government to bring peace and keep their cultural heritage intact. For many ordinary people they are the link to the government.”

That was the force that moved Osodi to launch his long-term project. In the process he makes it clear that at the root of Nigeria are hundreds of ethnic groups speaking hundreds of different languages. It is not even clear just how many kingdoms were in place before British colonial rule.

Originally a banker, Osodi turned to photography when he realized that banking could never be his calling. As a child and young man he was always interested in art, but found no way to express himself. He bowed under family pressure and left college to work in a bank. Soon, he began taking and developing photographs, and found the métier that would sustain him.

In order to pay his bills, however—and pay for his photography—he got a staff job at the local newspaper in Lagos, the Comet, where his work was soon noticed. He was hired by the Associated Press to be its man in Nigeria. His photojournalistic assignments led him to greater awareness of the issues in the Delta region of Nigeria, where he is from, an area rich in oil. Osodi compiled photo essays of the region, his city of Lagos, of back streets, and modern metropolises. He documented the environmental costs of oil exploration, and the impact on the environment of gold mining in Ghana. He chronicled the lives of residents of his hometown of Lagos, assembling portfolios that won critical acclaim.

“All of my work deals with issues and a story that needs to be told,” says Osodi, now forty-one and still a resident of Nigeria. “By paying attention to technique and framing and color, I seek to create beautiful images which draw viewers in and when examined can tell a story of tragedy, but also shows hope that people against the odds live their life and find happiness even when there is despair.”

The monarch project came with the one hundredth anniversary of the merger of the northern and southern kingdoms of Nigeria in 2014. Osodi wanted to preserve the cultural heritage of the various regions within the country that in his view strengthens Nigeria.

Osodi used a Hasselblad camera to give a sense of worth and stature to his subjects that only a large format camera can bring. By late 2013 he had photographed twenty monarchs with the Hasselblad (the company is now his sponsor), and plans to continue photographing as many kings and queens as he can.

“Each approach is different,” explains Osodi, “and I, coming from a photojournalistic background, have a determination to get access through whatever different means I can—through friends, relatives and individuals in court, who I either know or am allowed to befriend. It’s a long process to gain trust.”

Some of the kings and queens, princes and princesses who posed for Osodi gave him an entire day to photograph. Others sat for just a handful of frames. Some are photographed surrounded by their court, or among the opulent furnishings in their homes. Some of the photographs were taken at cultural festivals. The detail of the photographs is both staggering and absorbing.

The Osodi exhibition of forty prints—his first exhibition in the United States—is complemented with art from the museum’s own extensive collection of African art.

Christa Clarke, senior curator of the arts of global Africa at the Newark Museum, had been tracking Osodi’s work and was familiar with an exhibition of the series in London. The museum has been very active in developing its collection of African art and she approached him about showing his photographs in Newark. “There’s a lot of pride in an exhibition with such a rich tapestry of Nigerian work,” she says. And for those with little or no knowledge of African art, there is still great fascination with the subject matter, Clarke says.

For the museum’s director, Steven Kern, Osodi’s photos represent the continuation of the museum’s interest in African art, which is almost as old as the Newark Museum itself. The museum opened in 1909 as part of the Newark Public Library; the African collection began in 1917.

“The exhibition gives us the opportunity to re-launch a great story—it’s one of the great moments of the museum,” Kern says. “The Newark Museum is credited with being the first museum to collect African art as art, and not as curiosity or as ethnographic material. This goes to the museum’s founding director, John Dana Cotton, who believed aesthetics are everywhere. He was all about relevance and accessibility. This institution has always been a landmark for broad thinking about what great art can be.” 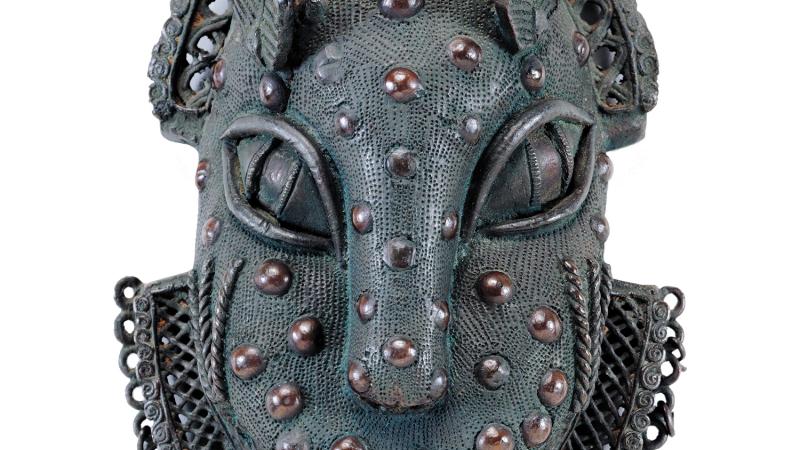 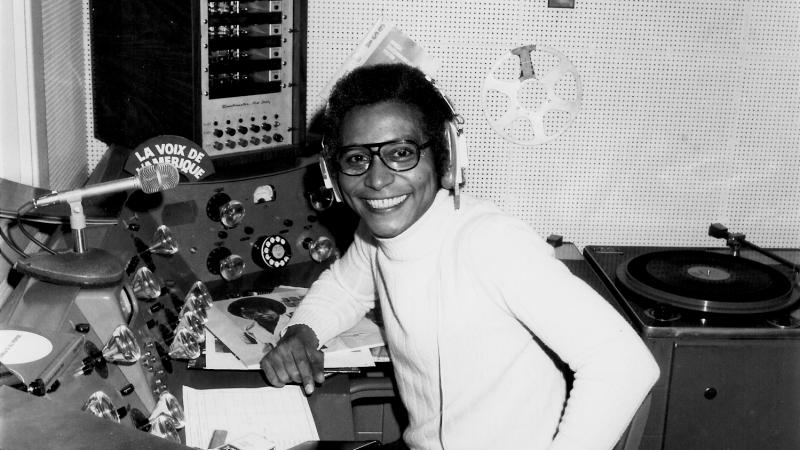 From Maxi Voom Voom to Afropop 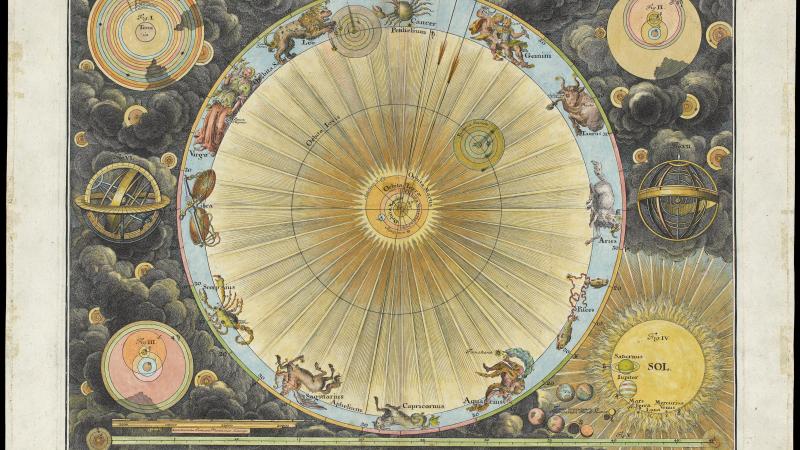 The Osher Map Library invites the whole world in.