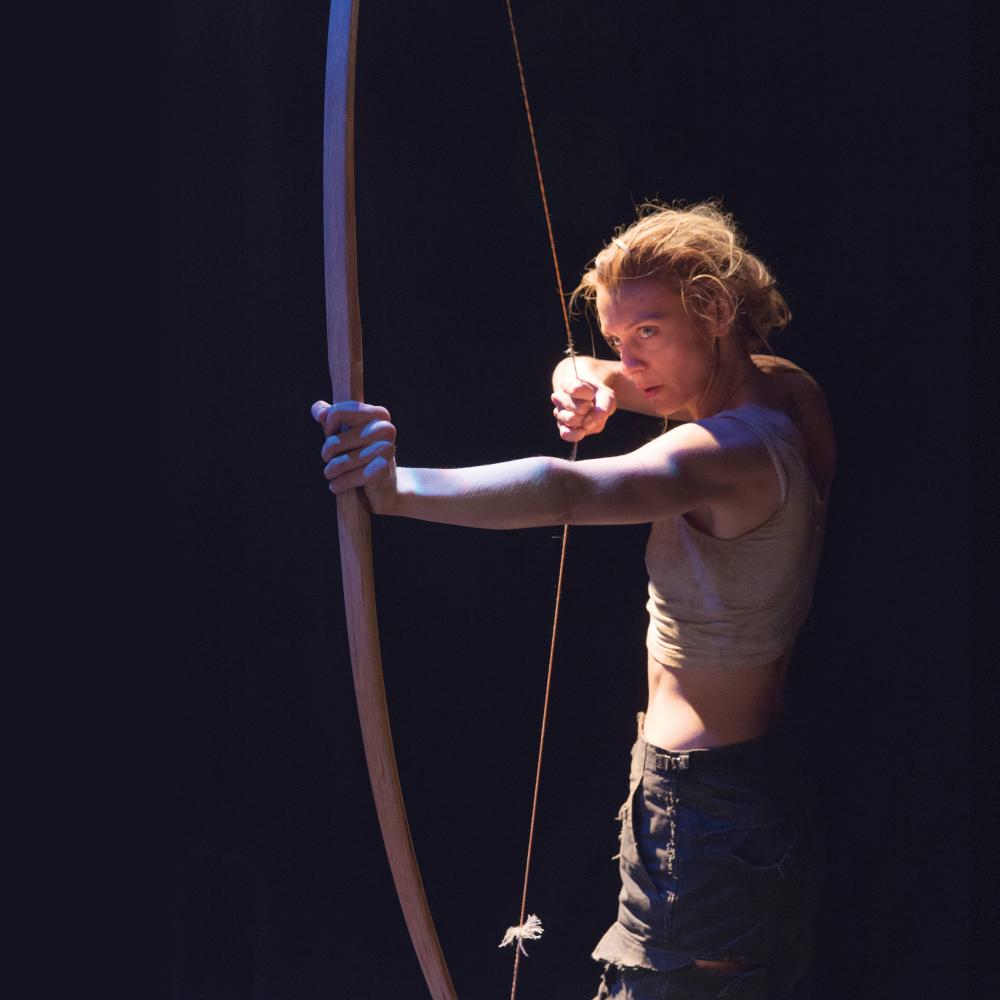 The first few years after I got back, everything rhymed with war. Then one day, I’m on the subway, half dozing on my commute, when a jolt makes me look up in a crowded train and I realize I’ve forgotten it all. I have to say, ‘Wait, I was a soldier at war.’ And not that long ago. 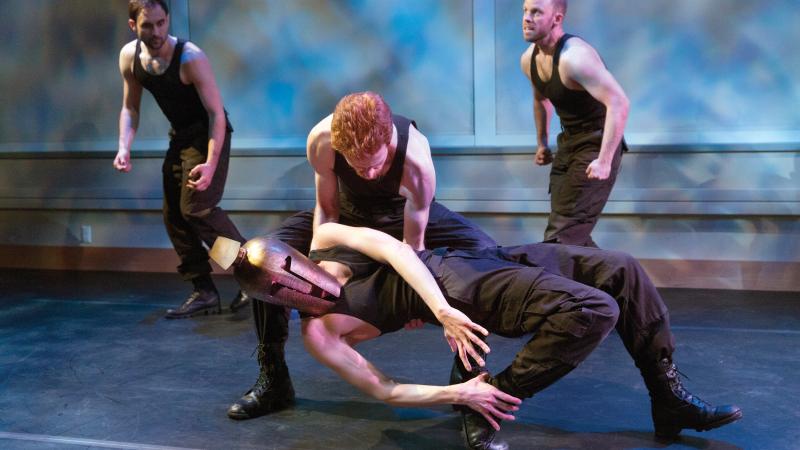 Marco Reininger, Ken Goode (back row), and Calder Shilling (front) perform as the chorus in Philoctetes, with Michael Ring wearing a helmet as Neoptolemus. 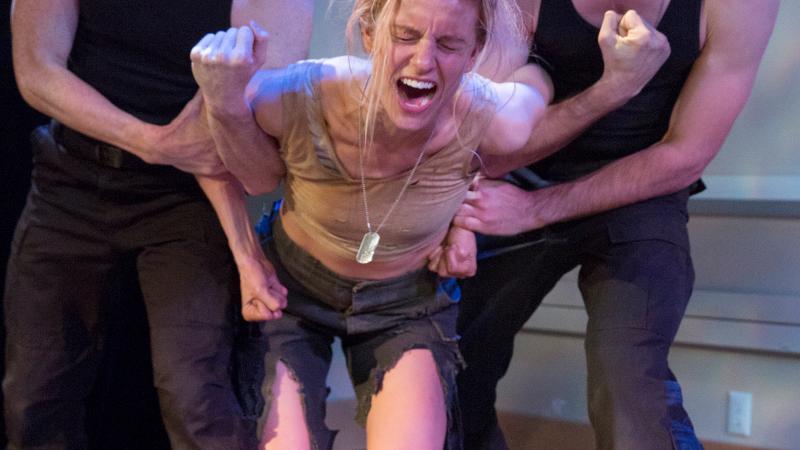 They don’t tell you this, but you can forget your tragedies as easily as your loves.

Not that it ever really leaves me, those fourteen months in Iraq, the five in Afghanistan. These were the defining events of my life, I told myself, even before I left on my first deployment. But I have my lapses. And that is both comforting and dangerous, to allow yourself to forget, even to realize that it’s possible. I know, trust me, that not everyone has that comfort. Even the promise of forgetting is a slur against the dead.

If you do get to forget, it doesn’t come all at once in a flash of forgiving amnesia. The first instinct after you come home is to play it all back, editing as you go for character development and narrative continuity.

The stories we told each other in the war zone were caustic and quick but honest in a way that’s hard to come by without being far from home and near to killing.

Back here, your grip loosens and war becomes unpersonified. You lose the clenched antagonist and find a subject. The “no bullshit” mode of storytelling, natural in the desert, is irretrievable, and you start to labor under the idea of truth-telling. And that labor shuts a lot of us up and convinces us that you wouldn’t understand anyway. So, we secretly nurse our wounds and curse you for your inattention.

What could be more dangerous than that—us veterans, appointed bearers of the national honor and folly, hiding what we know about the uses and costs of power, willing to let the same fatal mistakes happen again out of spite?

So, whatever it takes, get us talking.

On his way to fight in the Trojan War, Philoctetes (pronounced fil-uk-tee-teez) is bitten by a poisonous snake. His injury is incurable and Philoctetes, the warrior hero, can’t stop crying out in agony. He becomes unbearable. Unable to suffer in silence, and thus spare his fellow Greeks the thought of their own vulnerable flesh as they prepare for battle, Philoctetes is abandoned on the island of Lemnos.
He spends a decade there, festering in a cave, nursing hatred of his countrymen.

Later in the war, Philoctetes is needed again, but he doesn’t know it yet.

Odysseus, famed hero of Homer’s Odyssey, is among those responsible for Philoctetes’ banishment. Ten years after abandoning his friend, Odysseus returns to the island to bring back a bow held by Philoctetes and prophesied as the secret to conquering Troy. Odysseus explains to Neoptolemus, Achilles’ son who the prophecy directs must retrieve the bow, the reason for abandoning Philoctetes:

That dumped him, him and his cankered foot

Or what had been a foot before it rotted

And ate itself with ulcers.

We couldn’t even get peace at the altar

Without him breaking out in these howling fits,

He was putting us on edge,

He couldn’t be stopped

Everybody’s nerves were getting raw.

Once a hero, Philoctetes has become a leper. It’s not Philoctetes’ wound, which is only his to bear, that leads to his quarantine on Lemnos. It’s his suffering that threatens infection, his reek of decay and antiheroic bouts of grief.

Philoctetes’ exile comes “precisely because of his needs,” Christopher Coker writes inMen at War. “He has become an invalid and he represents the man that any hero could, in certain circumstances, become.”

It’s this play, about a soldier stripped of society and excommunicated by his fellow warriors, that was staged this past Veterans Day by YouStories, an initiative sponsored by the National Endowment for the Humanities.

The idea behind YouStories, “a national program aimed at members of the veteran community and the public” is to use “ancient stories about war to inspire new stories.”

Peter Meineck, a classics professor at New York University, runs YouStories in collaboration with Aquila Theatre in New York, which he founded. With a cast that includes both military veterans and members of the Aquila Theatre Company, Philocteteshas been touring the country. As the play travels, the project collects the stories of veterans who respond to the performance with their own critical interpretations and personal recollections. In that way, the play resonates outward and the community of the audience becomes a stage for new tellings.

Blending the ancient and the new, YouStories recasts Philoctetes as A Female Philoctetes, with a woman in the lead. Sophocles’ ancient drama, according to Men at War, is, “the only all-male play to have survived from the ancient world.” Broadened to include its victims and supporters, war was never an all-male pursuit, but its heroes, and thus its tragic figures too, were almost always men. That’s no longer true, of course, as women serving in frontline roles in Iraq and Afghanistan have become full members in the legacy of war, both its valor and its suffering.

Kristen Rouse, an Army veteran who served three tours in Afghanistan, recorded her own story for YouStories. In Rouse’s comments she finds, in a characteristically veteran insight, a conflict between mission and military hierarchy in the classical Greek drama.

“What makes Philoctetes so current for me,” Rouse says, is “Sophocles really gets at the complexities and the nuances of the military bureaucratic structure. The challenges of leaders working with each other and the really nuanced decision making.” Not the first reading many have of the play, but an understanding that grounds the drama’s themes in the practical, modern dilemmas that Rouse and other veterans face.

Later, Rouse reflects: “Casting Philoctetes as a woman challenges us to think, What does it mean to have a woman as a strong leader?”

“Do we view her differently,” Rouse asks, if we view her as a woman with weaknesses associated with a war injury?

In some productions, A Female Philoctetes is performed with a chorus made up entirely of veterans. That decision, to include veterans on stage as well as in the audience, reflects Meineck’s observations about the nature of arts outreach programs for veterans.

“Despite the proliferation of veteran outreach programs, we felt that few projects were actually hiring returning veterans as consultants or as employees,” Meineck said in an interview with the Classical Association of New England. “We wanted to create opportunities and open the doors for them to careers in the arts and humanities and to continue to learn from them.” The next project, now under way, is “The Warrior Chorus,” which Meineck explained, “will train veterans in the arts and humanities to perform and moderate public programs all over the country.”

At the Veterans Day performance I saw, the night began with NYU philosophy professor Kwame Anthony Appiah delivering a talk on national identity. “Telling Who We Are,” Appiah’s talk, was an attempt to ask what national identity means in the twenty-first century. How we decide, as Americans, who we are.

That question of national identity is central to Meineck’s vision for YouStories, a provisional, participatory attempt to create a conversation. The disconnect between the one percent of the population who served in the wars and the country they came back to “has imparted only a vague sense of the realities and ramifications of war,” said Meineck. “In our communities, we need an avenue for the society at large to deal responsibly with the issues and problems created in war.”

Philoctetes has a lot to say not just about war, but about the problems that war creates.

Philoctetes is wounded on his way to war; bitten before he reaches the battlefield. He is not, in any literal sense, the victim of a combat trauma. Sophocles’ concern, then, is not the toll that war exacts on its victims or combatants.

In his critical essay, “Philoctetes: The Wound and the Bow,” Edmund Wilson gives this interpretation of the play’s meaning: “The victim of a malodorous disease which renders him abhorrent to society and periodically degrades him and makes him helpless is also the master of a superhuman art which everybody has to respect and which the normal man finds he needs.”

“A perverse kind of nobility,” is Wilson’s phrase for Philoctetes’ obstinacy, his refusal to be rescued without an accounting for the crimes against him.

No mention of war at all appears in Wilson’s analysis. The critic finds themes of madness and aging in this “curious drama.” War hardly figures as a subject in Wilson’s essay; it’s a plotting device, the necessary exposition to surface the play’s deeper themes.

Sophocles’ play treats war as what happened yesterday and will return tomorrow. It’s never the dramatic foreground or the immediate cause of the characters’ moral conflict. The crisis occurs over the question of how to bring back Philoctetes’ bow and win the Trojan War. Young Neoptolemus refuses Odysseus’ command to trick Philcotetes out of his weapon. He’ll bring back the bow only by convincing Philoctetes to carry it himself.

Philoctetes is brought back into the nation that cast him out and now needs him once again, only after Neoptolemus acknowledges the old man’s betrayal (with some third-act help from a demigod’s intervention). It’s not compassion alone that motivates Neoptolemus, but a principled insistence on an honest reckoning, which helps persuade Philoctetes; that and the appeal to a common good, namely, duty to country and victory in war.

It’s a gamble insisting too strongly on modern, Western sensibilities as the only way to understand the history and experience of war. Drafting a female Philoctetes is the least of it. We risk deceiving ourselves by reading this ancient play only as a meditation on combat trauma that promises redemption. But then, promises of redemption are always risky.

Philoctetes, at least, won’t shut up. Whatever else the play is about, it’s about that—a man who can’t forget the wrongs he has suffered. Recasting and restaging the drama allows us to talk, too. Maybe it forces the conversation.

Jacob Siegel is a reporter at The Daily Beast and an Army veteran. He was an editor and contributor to Fire and Forget: Short Stories from the Long War, an anthology of short fiction by Iraq and Afghanistan veterans.

Aquila Theatre has received $380,000 from NEH for scholar-led reading/performance and discussion programs in twenty locations across the country, a website, and a mobile app focused on the ways classical Greek and Roman drama resonate for veterans and public audiences. The project is part of the NEH initiative Standing Together, which encourages humanities programs that focus on the history, experience, or meaning of war and military service. 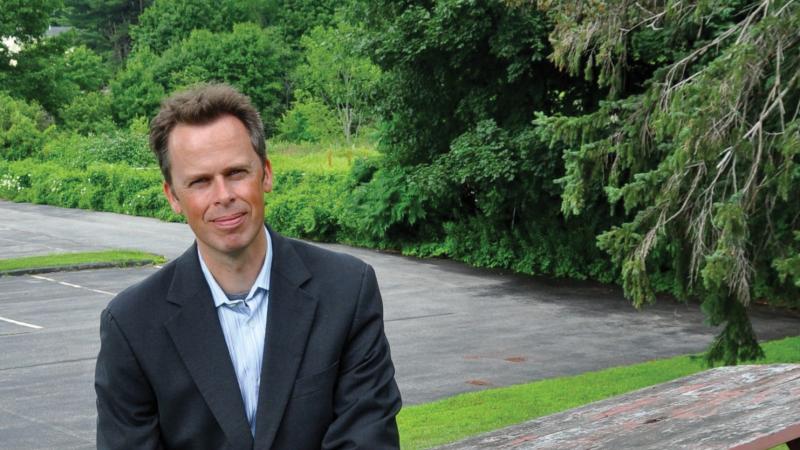