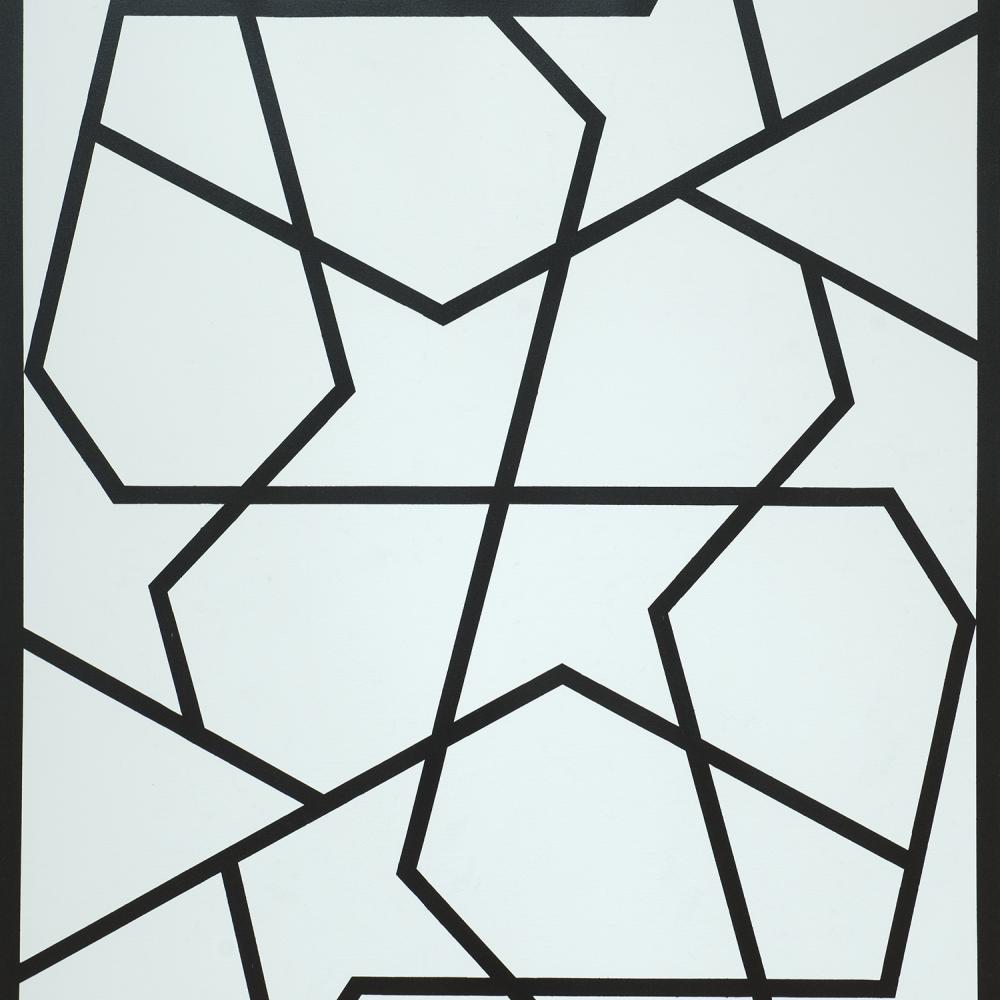 From the light patterns shining through the intricate fretwork stucco in the prayer room of the Ibn Tulun Mosque in Cairo, to the repetitive apertures of a Jali screen that allow the dry, northern Indian wind to circulate indoors, many examples of medieval Islamic art rely on complicated geometry for their beauty. Those techniques and patterns inspired an artistic revolution in the twentieth century and a recent exhibition of contemporary art at the Columbia Museum of Art in South Carolina.

In the exhibit, “Found in Translation,” sponsored by Humanities South Carolina, artist and author Steven Naifeh presented twenty-six tessellating works that explore the threads weaving together traditional Islamic art and the Geometric Abstraction movement, whose best-known practitioners included artists such as Piet Mondrian and Wassily Kandinsky. In 1910, Kandinsky saw an exhibition of Islamic art in Munich, where he was studying, inspiring him to produce abstract work. By 1912, he published a groundbreaking collection of essays with Franz Marc on abstraction, setting off a movement of nonobjective art that relied entirely on line, color, and geometric shapes. Naifeh, whose 1991 book with Gregory White Smith on Jackson Pollock won a Pulitzer Prize, has continued in the abstract vein, producing colossal works, such as Jali XXXVII, a twelve-by-six-by-six-foot outdoor piece made from steel and acrylic paint at his home studio in Aiken.

Courtesy the Columbia Museum of Art

Born in Iran when his father was a U.S. diplomat there, Naifeh’s childhood as an American living throughout the Islamic world—from Pakistan to Nigeria—has shaped his views of humanity and culture. He recalls when his father, George Naifeh, who was working for the State Department in Aman, invited American modern dance pioneer Martha Graham to perform in Jordan: “It was the early 1970s, just about the time I finished college. The challenge was getting Martha, her entire orchestra, and her troupe over the Israeli/Jordanian border, before the Camp David Accords. But it turned out that her dance company was a huge hit in both Israel and Jordan; this is just another example of art creating a bridge between cultures.”

Naifeh has brought the beauty that he remembers from his childhood in the Middle East to a fresh audience, nearly six thousand miles and forty years away. “One place we lived was a small village—Bayda, Libya, and we would go to the nearby beaches of Cyrene . . . completely surrounded by these empty Roman ruins, it was pretty spectacular.” His piece in the exhibition, Cyrene IX: Shimmering Sky, with a seemingly endless expanse of blue patterns, offers a glimpse of this memory. In Saida XXX: Venetian Blue, (saida means “happy” in Arabic and was the name of Naifeh’s grandmother), the polygons rotate outward and grow from a shimmer of faded color to a deep intense blue.

Speaking about his work, Naifeh says there are multiple influences. “It is important to me to have people see that these two cultures have so much in common, and it is important to me to have people know there can be harmony in these two cultures. [The exhibit is] a celebration of what is positive in a region that is in such turmoil; there is such harmony between the Islamic culture of a thousand years ago and the Geometric Abstraction of the United States and Europe.”

Courtesy the Columbia Museum of Art.

Islam, in part because of its ban on figural representation, has contributed certain characteristics to art that have been seen since the seventh century: Artists have to rely on vegetal motifs, calligraphy, and geometric patterns for ornamentation. According to a 2007 article in the journal Science, physicists Peter Lu and Paul J. Steinhardt discovered that Islamic artists as far back as the fifteenth century were using the concept of quasicrystalline geometry, symmetrical polygonal shapes in patterns that can be extended indefinitely without repetition. The polygons are actually mathematical principles that are appreciated both as science and art; however, the math precedes the shape. “They made tilings that reflect mathematics that were so sophisticated that we didn’t figure it out until the last twenty or thirty years,” said Lu in a 2007 interview with Reuters.

Naifeh studied the work of the medieval Islamic mathematicians and the application of their formulae, and, with a staff of his own, conceived and constructed his large-scale works. In spite of this laborious process, he notes, “one of the things I hope for, is that people who walk into this exhibition . . . can enjoy it without even knowing how it came about. The shapes are, I hope, both complex and simple at the same time . . . exciting, without knowing anything about them. I hope that with my work, you don’t need to know that it comes from a certain set of geometries, or that it is influenced by art of a different era and a different place, to get the joy of it.”

Will South, chief curator of the Columbia Museum of Art, states, “We all need to understand more about the world in which we live, and Naifeh’s exhibition is a smart, vibrant way of encountering Middle Eastern ideas.”

Naifeh says, “The way the geometric shapes in my paintings and sculptures connect with one another so firmly is an elegant metaphor for the way that all of the arts bring people from such diverse backgrounds so firmly together.” In bridging these divergent cultures, Naifeh is describing a world of commonality between them. And now, as the artist himself traverses over this bridge, peering into the waters beneath, he can see the image of an emissary reflected back to him. 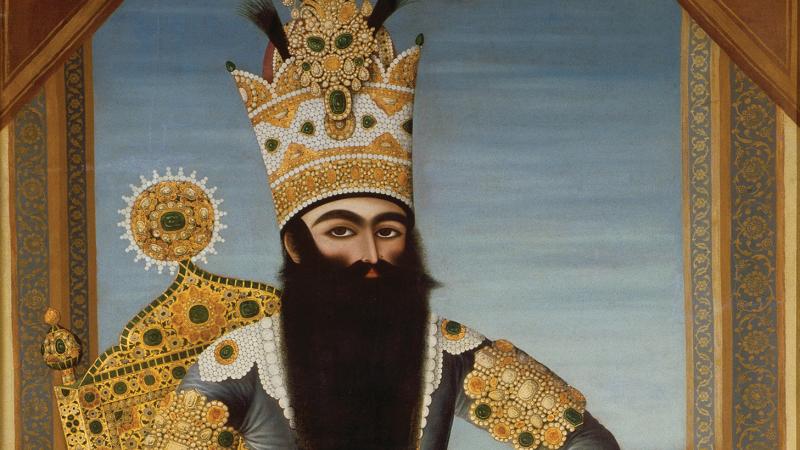 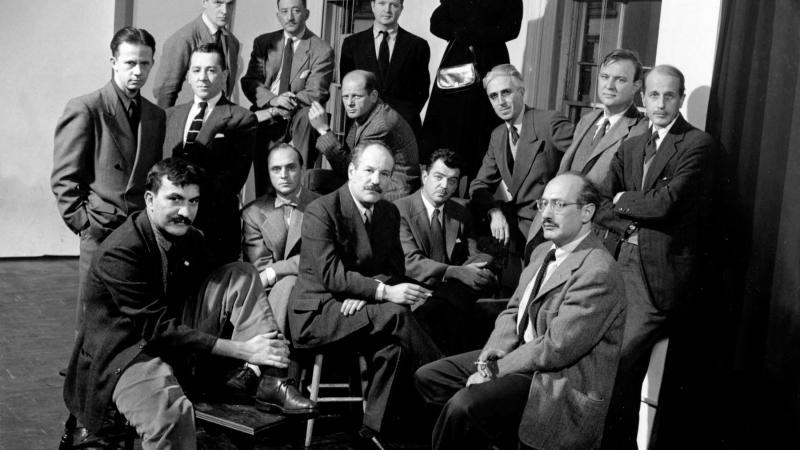 Clement Greenberg and Harold Rosenberg set the standards for art in the 1950s.