Richard Brookhiser shows the relevance of Alexander Hamilton to our modern lives. 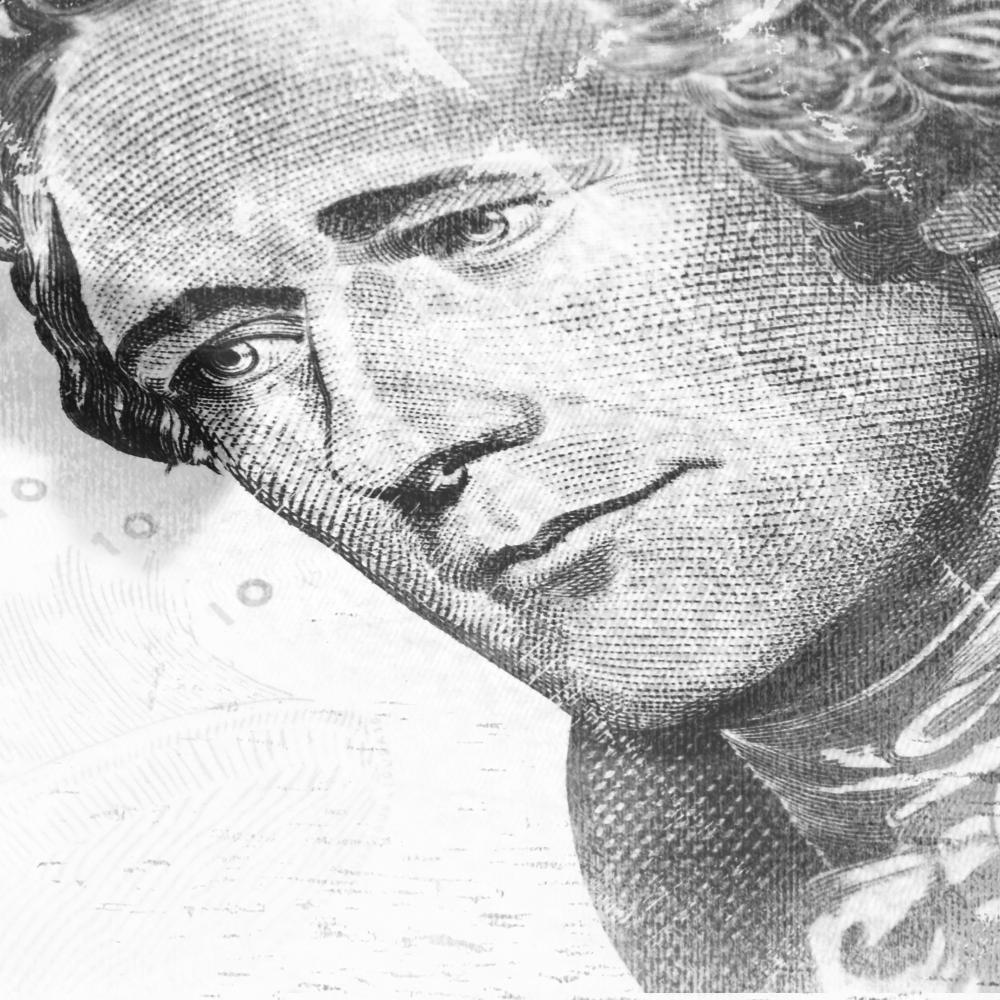 Richard Brookhiser is the American Plutarch—probably taller and skinnier than the original, but just as lucid and witty in style, and setting for himself the same task as a biographer and historian. In a series of brisk and beautifully written books, Brookhiser has offered portraits of America’s Founders that can be enjoyed not just for information and entertainment but for civic enrichment. Brookhiser treats his subjects—Washington, Hamilton, Gouverneur Morris, the Adamses—in the Plutarchian style, as exemplars.

His premise is that the great men of America’s founding generation are figures of the present as well as the past. Their essence is found in the principles they prized and the institutions they created—which we, as their inheritors, are bound by duty to understand, whether we like it or not. From their lives and the facts of the founding, Brookhiser plumbs for answers to questions that should concern us more than they do: How do we organize ourselves as a free people? What are the obligations of citizenship? And what does it mean, finally, to be an American?

There’s no better instance of Brookhiser’s method than his Alexander Hamilton, American, published in 2000. The book quickly established itself as the best short biography available of this “most audacious, visionary, and tragic of America’s Founders” (as the historian Richard Norton Smith describes him). Hamilton’s life is rich material for storytelling, swinging as it does between the poles of war and peace, grinding poverty and high finance, harlotry and true love, the frontiers of empire and the capitals of Europe, the most penetrating philosophical reflections and the crassest political maneuvering. Yet the theme of Hamilton’s life, Brookhiser wrote, “is his identity as an American,” an identity that he created for himself and that set the course for generations of immigrants.

With other writers (Plutarch always excepted) the extrusion of civic uplift from the raw data of biography can seem ponderous or banal—Parson Weems has a lot to answer for. But Brookhiser is the liveliest of moralists. As if to prove the point, he has lately transferred his talents from the page to the screen. With funding from the National Endowment for the Humanities, he has followed his first documentary, the much-praised Rediscovering George Washington, with Rediscovering Alexander Hamilton. They’re unlike any filmed histories I know.

Brookhiser and his collaborator, the filmmaker Michael Pack, know the perils of bringing history to TV. Over the field of historical documentary these days, the figure of Ken Burns looms like a giant balloon in the Macy’s Thanksgiving Day Parade: impossibly large, inescapable, undeniably impressive. Burns, of course, is another beneficiary of the NEH, perhaps the most successful, commercially and artistically, of the past generation, and his greatness—his technical skill placed in service to a singular understanding of how history should feel and sound and look—has by now become as much a burden as an inspiration to anyone who hopes to make the past come alive on film. Burns is inimitable, or should be.

You can always tell a Burns imitator. The weary tones of the unseen narrator, meant by Burns to inspire reflection and respect for the weight of the past, become merely lugubrious; the zither-‘n’-fiddle music is less quaint than cloying; and even the sumptuous sunset landscapes can seem stagey in hands that are less gifted than Burns’s, as most hands are. The genre of historical documentary has been a victim of his mastery of it, an unintended consequence of prodigious gifts.

Brookhiser and Pack mean to bust out of this dead-end. Their technique is to spend nearly as much time in the present as they do in the past, and to keep moving—always moving. “What is Hamilton’s relevance today?” Brookhiser asks in opening the film. “There’s only one way to find out. I decided to walk the paths of Hamilton’s life and look at the modern versions of the institutions he created.” We see a three-card monte shark suckering passersby on today’s Wall Street, a scene which quickly and painlessly introduces three points: Hamilton is that fellow on the ten dollar bill, he is the father of American finance, and he is a woefully remote figure in the minds of most Americans.

He is less remote to the people of St. Croix, where Hamilton was born in 1755 or 1757 (scholars differ). Here, Brookhiser says, “he is the stuff of local legend,” including the supposition—discounted by our host—that he had African blood. St. Croix and the Caribbean are where Hamilton’s earliest views of business, politics, and human nature were shaped. The offloading of slaves at port filled him with a revulsion for slavery. The bustling commerce gave him an appreciation for globalized trade and the commingling of distant peoples. His employment at age fourteen as a clerk in a shipping concern taught him the value of finance and the uses of debt. And the terrors of his upbringing—abandoned by a ne’er-do-well father and left to the care of a well-meaning but dissolute mother—endowed him, as historian Ron Chernow tells Brookhiser, with “a deep and penetrating pessimism about human affairs.”

Chernow is one of the certified experts that Brookhiser and Pack bring in to advance their story. Among the other usual suspects are Sean Wilentz, Jay Winik, and Gore Vidal, the self-crowned “biographer of America.” But the film is at its best when it shows rather than tells. Less conventional and just as rewarding are the experts whose certification comes mostly in life experiences not far from Hamilton’s own. Brookhiser talks with the owner of the last sugarcane patch on the island and sits in on a meeting of the editorial board of the newspaper—still publishing—where Hamilton learned how to use words. Brookhiser describes the imprisonment of Hamilton’s mother but doesn’t stop there: To make her experience more immediate he brings together current inmates of a prison on St. Croix to describe her plight in relation to theirs. To illustrate Hamilton’s “moment of glory” at Yorktown, he recruits every boy from a nearby high school to recreate the mayhem with inflatable bats and rebel yells—not era-appropriate, maybe, but still effective.

Tabb high school students use inflatable bats to reenact the Battle of Yorktown in Virginia.

It doesn’t take long to see what Brookhiser is driving at. He wants to show that history isn't a pretty and unapproachable museum display, as in a Burns documentary, or a distant irrelevancy, as in the dusty artifacts of academia, but something that’s all around us, here and now, often literally in the ground beneath our feet. The past has shaped Americans as surely as it has shaped the physical landscape; it makes us what we are, whether we know it or not. Brookhiser’s approach is serious but not somber, breezy but not trite, a mix of high and low: equal parts journalism, historiography, and showbiz.

It usually works but there are dangers to it, too. At times Rediscovering Alexander Hamilton veers perilously close to slapstick—if the inflatable-bat scene had gone on a moment longer we’d be looking for Curly and Moe. At other moments the movie becomes literally cartoonish: An animated sequence explaining the complexities of debt repayments is no more illuminating than if Brookhiser had simply cornered a governor of the Federal Reserve. The cartoon is supposed to be fun, I think. No word has done more damage to the popularization of history than the word fun. Relevant, maybe.

Curiously, Brookhiser lets some inaccuracies from his interlocutors stand without challenge. The publisher of the St. Croix Avis apparently thinks that Hamilton wrote the Constitution. Judge Marilyn Milian of The People’s Court seems to believe that the principle of judicial review is set down in the Constitution. A New York Times columnist says that in writing the Federalist Hamilton was “reacting both to current events and to eternity.” That’s putting a bit too much on Hamilton’s plate. What I think the Timesman means is that Hamilton was dealing with timeless questions. He left eternity to the divines—a good general policy.

“The principles of freedom and the topics of government,” George Washington once wrote to Hamilton, “will be always interesting to mankind.” But mankind—particularly that portion of it found in a fat and happy country like the United States—needs a little prompting. The most horrifying moment in Rediscovering comes near the halfway point. Brookhiser traces Hamilton’s peripatetic education, from Princeton to King’s College, now Columbia University. He stands before the Hamilton statue near the entrance to Columbia’s Hamilton Hall and asks passing undergraduates whether they know who this Hamilton person is. And none of the Ivy Leaguers do.

Brookhiser has the grace not to appear appalled, and he knows enough not to look surprised. It’s just another moment that underscores how desperately America needs its Plutarch.

Andrew Ferguson is a senior editor at the Weekly Standard. His new book, Crazy U: One Dad’s Crash Course On Getting His Kid into College, has just been published by Simon and Schuster.

The Witherspoon Institute received $725,000 from NEH to produce the ninety-minute documentary Redisovering Alexander Hamilton, which airs April 11 on PBS. 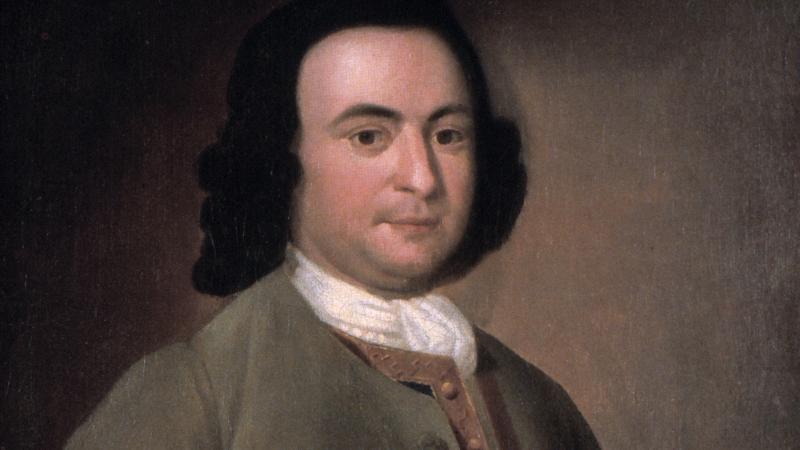 George Mason swore he would rather "chop off his right hand" than sign the Constitution. 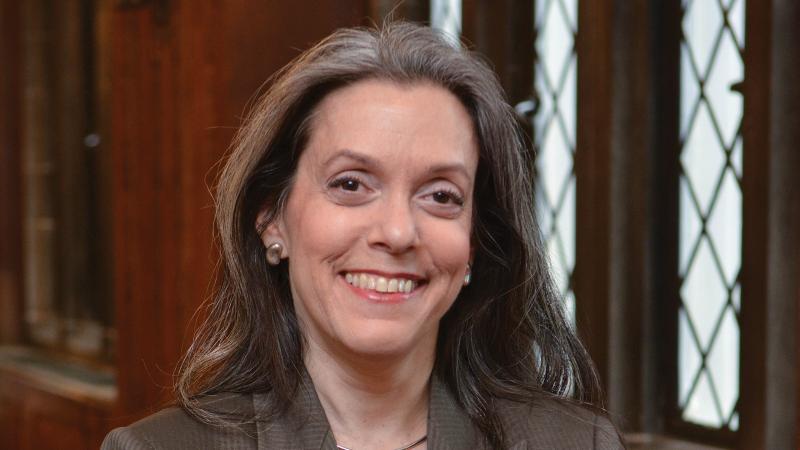 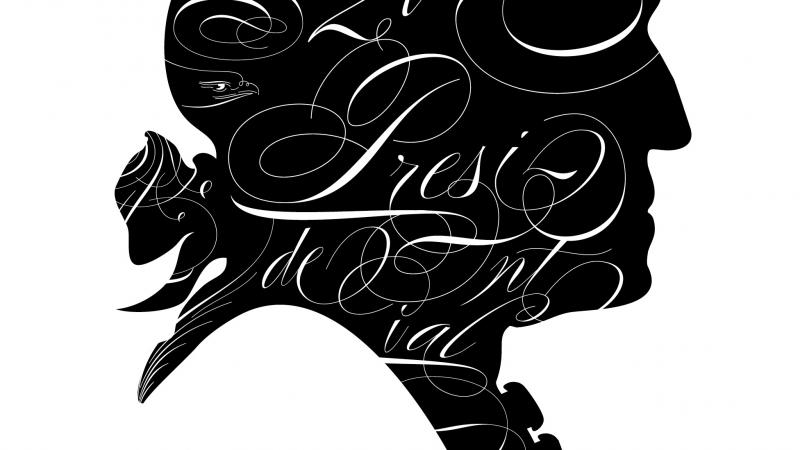 How to Be Presidential 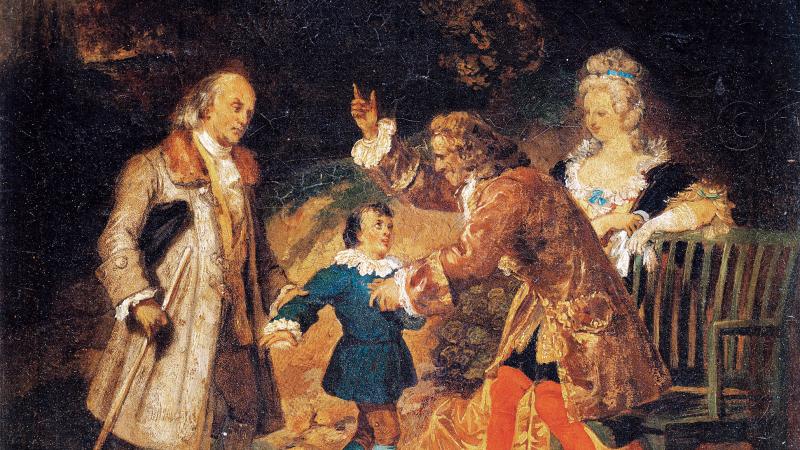