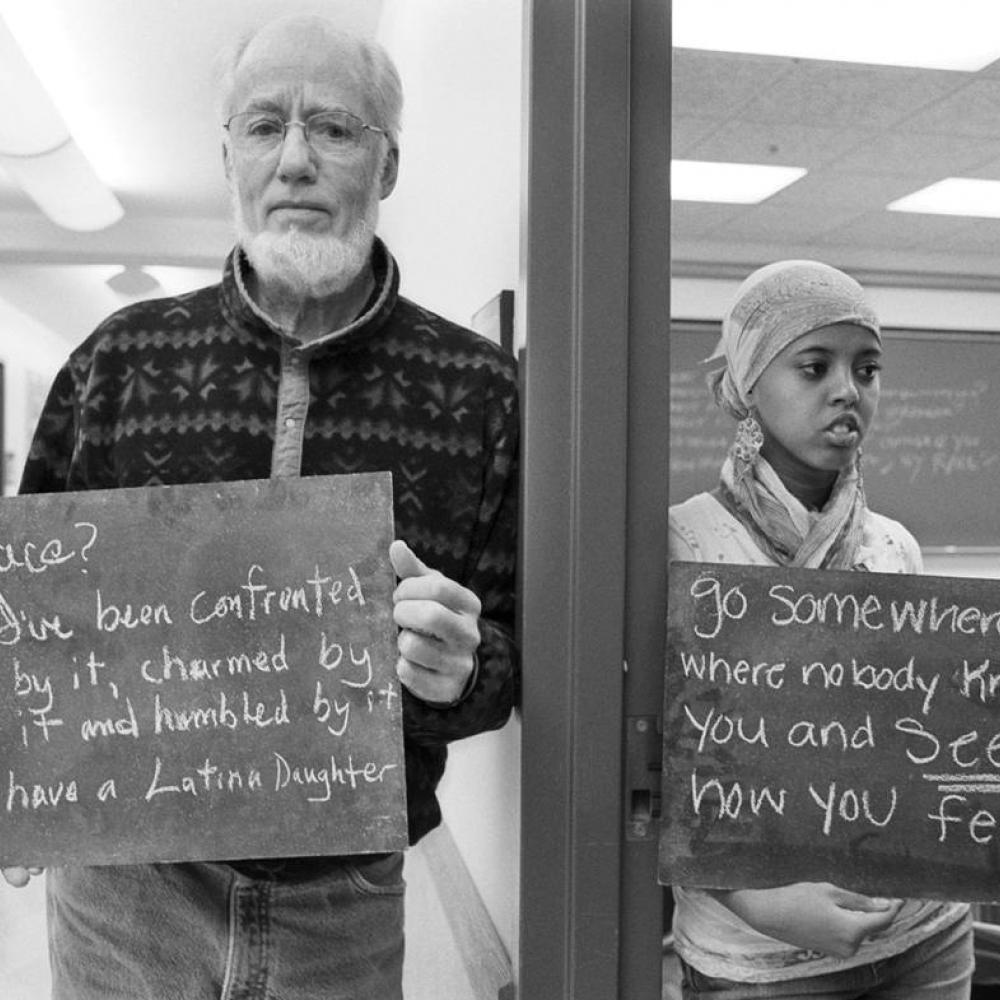 The subjects of the photos reveal their thoughts in chalk.

More than 250 photographs hang in storefronts and on buildings along University Avenue, a major artery connecting St. Paul and Minneapolis. Taken by Wing Young Huie, these locally celebrated pictures comprise a four-year visual study of the avenue as an urban ecosystem, home to students, immigrants, big box stores, vacant car lots, and the state capitol. Mixing sociology and personal expression, the series has prompted Minnesotans to think about the place of art in their lives—and to think of their lives as art.

“There are now schools along University Avenue where students from forty or more countries are represented, mixed in with those whose families have been here for many generations,” says Huie. “This is not only a six-mile public art exhibition, this is a six-mile classroom that explores the changing cultural landscape of urban life in Saint Paul.”

While documenting life along the avenue, Huie added another element to the images, asking participants to reveal something personal about themselves on a chalkboard. Huie asked questions such as What are you? What advice would you give a stranger? How has race affected you? The responses help fill the divide between the perception and the reality of how people live.

Huie says some people think about the questions a long time before writing their answers on the chalkboard, others know immediately. “One woman waiting for a bus with a child knew what she wanted to write right away: ‘I was shot 5 times!!! You have to live life 2 the fullest!!’” says Huie. “She was sort of matter of fact about it and then her bus arrived.” Later, a man looking at that picture in the exhibition said to Huie, “It makes me think I don’t have it so bad, and I’m homeless.”

The centerpiece of the exhibition is called the Project(ion) Site, a forty-foot screen held up by stacked shipping containers placed in an empty lot near Hamline University. From Wednesdays through Sundays at twilight, visitors can see a two-hour large-scale photography show accompanied by a soundtrack recorded by local musicians. Huie says the empty lot has been transformed. “The Project(ion) Site has become a sort of town square.”

Each video is narrated by the artists themselves, giving a window into their creative process and allowing the audience to witness their passion as well as challenges and disappointments. Virgil Leih, a wood turner who creates large-scale wood sculptures out of the Minnesota tree stumps he rescues from landfills, woodchippers, and power-company incinerators, talks about how a third of his sculptures cracked in the drying process and how he remedied the problem. Leih talks about his successful pieces with a twinkle in his eyes. “I didn’t create that grain, I didn’t create that beauty,” he says. “I was a participant to reveal the beauty that was already there.”

For luthier Finn Jørgen Meyer, who crafts violins, violas, cellos, and bows using 200-year-old techniques, we see him whittle a bow, only to come across a knot in the wood after hours of painstaking work, rendering it useless. But we also get to see his delight when a violinist visits his studio to play his newest creation, one he spent nearly two months making. “When players trust you enough to play your instrument, that’s a really nice thing. So my little role in making the instrument . . . is so rewarding emotionally.”

Funding for MN Originals has been provided by the Clean Water, Land, and Legacy Amendment passed in 2008, which dedicates a portion of state taxes to the Arts and Cultural Heritage Fund “to be spent only for arts, arts education, and arts access, and to preserve Minnesota’s history and cultural heritage.” The Minnesota Humanities Center has created downloadable educational guides for each episode.

Through MN Originals, the work of Minnesota artists reach a much wider audience. “I’ve received quite a few reactions by people who saw MN Originals,” says Huie. “To make people aware of art you can see, feel, hear, and touch is very important.”