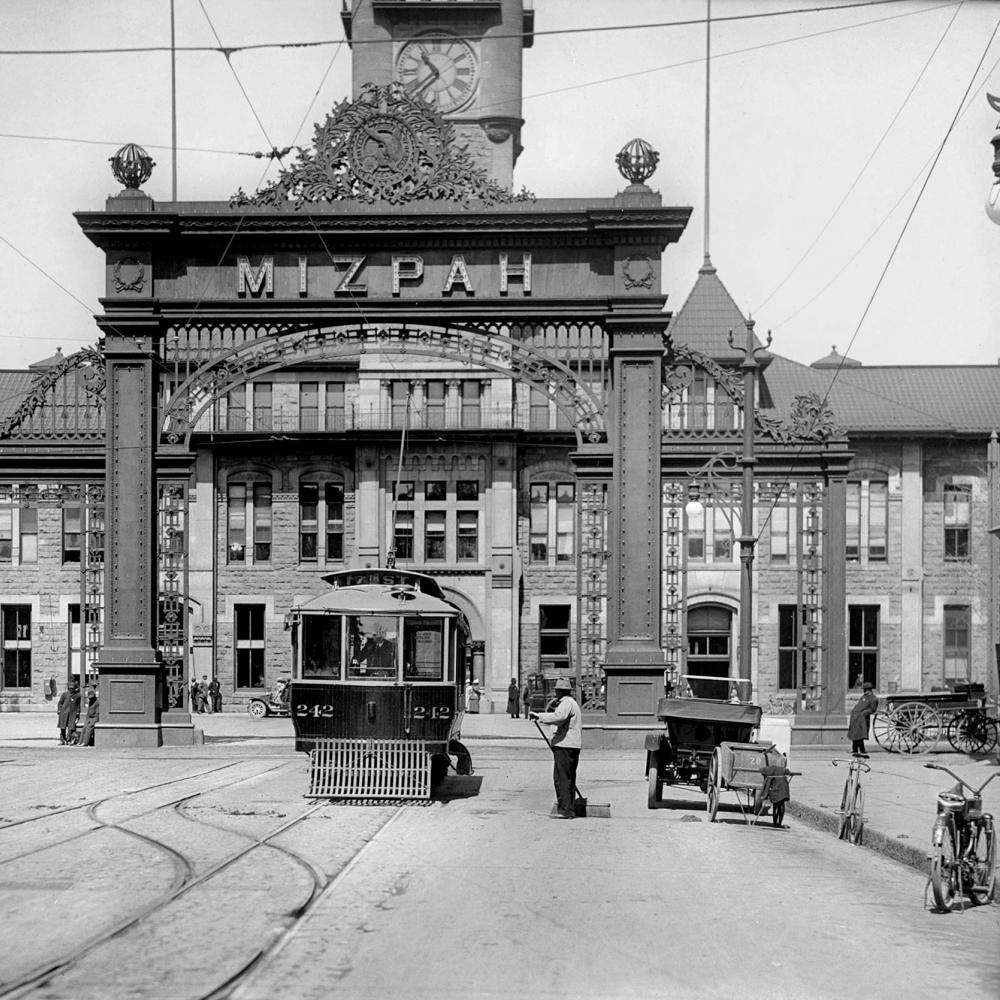 The Mizpah Arch said “Welcome” on one side to those arriving at Denver’s Union Station, and “God watch over you” in Hebrew to those departing.

Prospectors were not striking it rich panning for gold. Leaders of the infant mining town at the confluence of Cherry Creek and the South Platte River felt they needed bigger, heavier equipment to dig deeper and get the ore out. What they needed, they determined, was the railroad.

Denver pinned its economic hopes on becoming a stop along the Transcontinental Railroad. Equipment, tools, and other supplies could arrive from the East while cattle, grain, coal, and gold ore shipped out. But, in 1865, the Union Pacific Railroad announced it was too hard to tunnel through the high Rocky Mountain peaks hugging Denver, and opted for the terrain of Cheyenne, Wyoming, a low point in the Continental Divide. When the news hit town, Denver’s population plummeted.

Those who remained turned desperation into determination. Rocky Mountain Newseditor William Byers and Governor John Evans united in their conviction that if the railroad wouldn’t come to them, they would come to the railroad. Byers and other town leaders established the Denver Pacific Railway and Telegraph Company in 1867 to build a 106-mile rail line to Cheyenne, and grading began the next spring. In 1870, the track between Denver and Cheyenne was completed, providing access to the nation.

Within ten years, thirteen railroad companies were operating separate depots in Denver, creating a chaotic haphazard system. New York financier Jay Gould had created a single unified train depot in other American towns, and with the assistance of local businessman Walter Cheesman, he proceeded to do likewise in the Mile High City. The station was built on the edge of town but didn’t remain an outskirt for long; the city came to meet it. In the early days, hotels, warehouses, and stockyards thrived in proximity to the rails. Later, banks, stores, and other businesses filled in to form the downtown Denver of today. Within a few years of Union Station’s 1881 opening, sixty passenger trains were passing through Denver every day.

Denver Union Station: Portal to Progress, a film by producer-director Jim Havey, tells the stories of Byers and Evans, Gould and Cheesman, and of moving tons of freight and thousands of people daily. The film was distributed by Colorado Humanities to 1,700 Colorado elementary schools and public libraries.

Denver’s ambitions didn’t end with the station. Competing to attract conferences and onventions, the city built a bronze arch just outside the station, lit with over two thousand light bulbs. Visitors could see the word WELCOME night or day, whenever they arrived at the station. Trouble was, the word WELCOME was also emblazoned on the other side of the arch. About a year went by until townspeople figured it wasn’t fitting to welcome someone to leave. They replaced the inapt sentiment with the Hebrew word MIZPAH, meaning God watch over you while we are apart. “Not only did it serve as a blessing, but it implies an open invitation to come back,” Havey says.

The French Gothic-style station was state of the art, wired for electricity, and the largest building the city had seen. But, in 1894, a fire started from an electrical malfunction in a chandelier that hung over the ladies’ waiting room. It burned a large part of the central section of the depot, the cause for major rebuilding. The new station was even bigger and modeled in the popular Romanesque style of buildings seen in America’s great cities. In 1914, the central building was redesigned again to accommodate more passenger areas, this time in the Beaux Arts style.

Separate waiting rooms for men and women were not uncommon in depots and other public places, according to historian Judy Morley. “In the Victorian era, it was not considered appropriate for women to be corrupted by the rough-and-tumble world of men,” Morley says. Even when women traveled with their husbands, they waited in separate rooms. “Men could be left to smoke and drink, and no one had to worry about a woman being looked at the wrong way.”

In later decades, smoking and drinking became commonplace among both genders when they mingled at establishments within Union Station. It was a destination in itself—Denverites flocked to the station for cocktails, dinner, and nightlife. “It was a vibrant, exciting place to be,” Havey says. “In the 1940s and fifties, people went to restaurants and bars at the station because they were elegant. Sometimes, people would go to the station just to people watch.”

The MIZPAH Arch came down in 1931; it was considered a traffic hazard. However, Denver maintains a connection to its heritage of receiving visitors. Certain street lamps in downtown are now marked with “welcome” on one side and “mizpah” on the other, as a reminder of the railway’s heyday.