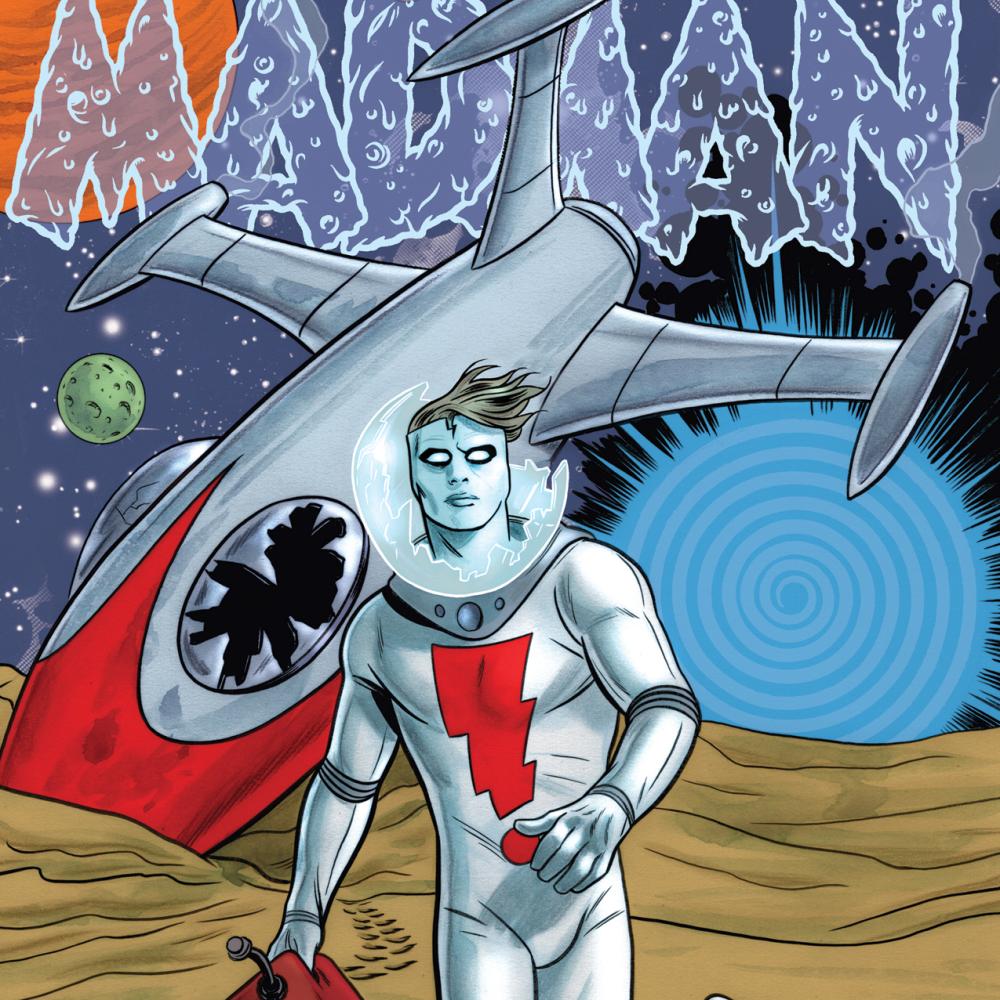 Cover of Madman Atomic Comics No. 7, 2007, by Michael Allred, with color by Laura Allred.

At the Maryhill Museum of Art in Goldendale, Washington, the same museum that houses Rodin’s The Thinker and objects d’art from the palaces of the Queen Marie of Romania, visitors can view images depicting a Victorian-era robot who fights alongside Teddy Roosevelt and Lawrence of Arabia; an historic journey through the U.S. Constitution; and a superhero whose name is Frank Einstein, a cross between Frank Sinatra and Albert Einstein, as part of the “Comics at the Crossroads: The Art of the Graphic Novel.”

The exhibition offers more than novelty, says curator Steven L. Grafe. Inside such illustrated story frames depicting human beings with supernatural powers and the ability to travel through time, one finds examples of the grander artistic tradition, especially in the attention devoted to action and physique.

“Today’s comic artists are the inheritors of the classical European art tradition,” says Grafe. “Representational and figurative art is more or less out of fashion in contemporary art circles. A century ago—and going back to at least the Renaissance—skillful modeling of the human figure was necessary for any artist’s success. I’m hard-pressed to identify other groups of artists that are now so universally concerned with the human form.”

Grafe hopes visitors see the sophisticated design sense and mastery with which comic artists render their worlds. Creating comic book art is a complicated process, taking an army of creative personalities (although occasionally developed by a single artist). Traditionally, a writer comes up with the storyline and writes the words; a penciler uses drawings to illustrate the story; inkers ink over the pencil lines using India ink and a paint brush, supplying depth and texture; a colorist provides color, light, and shadow using traditional fine-art techniques; and a letterer adds word balloons, sound effects, titles, and captions. Today, computers are often used to combine or replace some of these steps.

Since Superman appeared on the scene in 1938, comics have spanned a spectrum of literary, social, and political issues such as war, corporate and political corruption, drug use, and racism. In 1954, the Comics Code Authority was created to curb suspect content in American comic books. As a result, comic books became sanitized, spawning a new underground movement that emerged in the 1960s with more diversity, psychological complexity, and mature themes.

Over the last two decades, graphic novels have forged into the literary mainstream. Examples such as Art Spiegelman’s Maus, Frank Miller’s Batman: The Dark Knight Returns and Alan Moore’s Watchmen are discussed in university classrooms and found in the stacks of academic and public libraries. This year, Portland-based artist Joe Sacco’s Footnotes in Gaza was awarded the 2010 Ridenhour Book Prize, marking the first time this prestigious award was given for an illustrated novel.

Annual comic book conventions, known as comicons, add another dimension to the rise of the graphic novel. The two- to four-day events often feature panel discussions, seminars, workshops, and portfolio review sessions. Larger comicons, such as the San Diego Comic-Con International, which attracted more the 140,000 this year, also screens trailers for upcoming feature films, presents awards, and gives prizes for costumes. Okay, chuckle if you must at the thought of convention-goers, mostly adults, maybe socially awkward, dressed as Spider-Man or an Imperial Storm Trooper or Wonder Woman or a Klingon Warrior. But with Magneto-like attraction, each of these conventions is drawing in new legions of devotees, writers, and artists.

“Comics are attracting new readers, in part because there is so much diversity in the titles that are now available,” says Grafe. “A number are autobiographical, inspired by the lives of the writers and artists who create them, or they contain some other nonfiction narrative. Portland-based artist Craig Thompson’s ground-breaking Blankets has been translated into a dozen languages and is almost 600 pages.”

On display through Nov. 15, the exhibition, supported by the Washington Humanities Council, features forty artists from the Pacific Northwest, home to a burgeoning comic arts community. “The Northwest has become a haven for comic artists,” says Grafe, “in part because important publishers are located in Portland and Seattle, and partly because regional comic artists have built a supportive community that continues to attract new artists.”