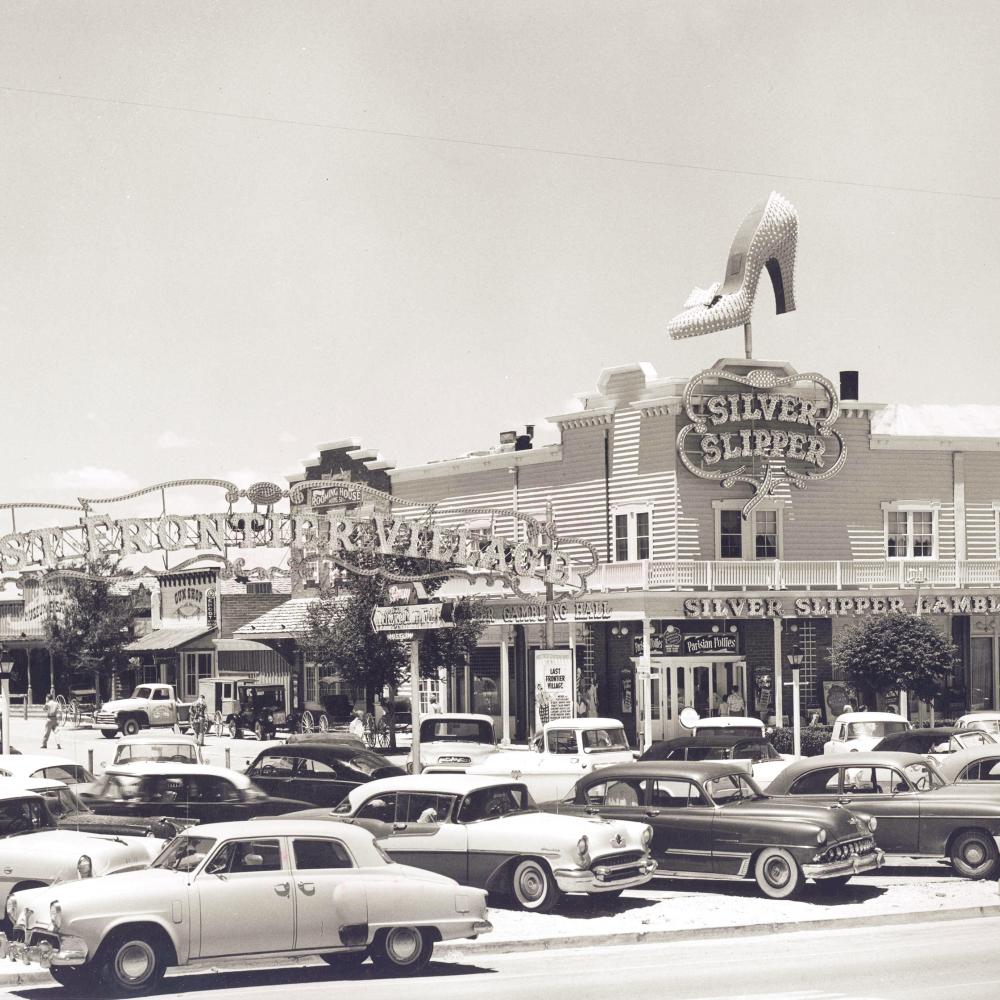 The Silver Slipper was part of Howard Hughes’s monopoly of casinos on the Vegas strip.

Howard Hughes arrived secretly in Las Vegas via private train on Thanksgiving Day, 1966. After receiving a $500-million windfall from the sale of his stock in Trans World Airlines, Hughes left his home in Los Angeles for the Nevada desert to avoid paying hefty California state taxes, and to, as he put it, “be a big fish in a small pond.” Dressed in blue pajamas, the frail billionaire was carried by stretcher and placed on a service elevator to the ninth-floor penthouse suite at the Desert Inn hotel-casino for what was to be a ten-day stay.

Checkout time came and went, and Hughes, already an eccentric recluse, stayed put despite demands from management to vacate. Rather than leave, Hughes bought the hotel for $13.2 million, far more than it was worth. “Hughes never intended to buy a hotel—he just wanted a place to sleep,” said Robert Maheu, Hughes’s top aide.

Hughes had high hopes for his new city. He wrote to Maheu that he sought to “make Las Vegas as trustworthy and respectable as the New York Stock Exchange—so that Nevada gambling will have the kind of reputation that Lloyds of London has, so that Nevada on a note will be like Sterling on silver. We can make a really super environmental ‘city of the future’ here—no smog, no contamination, efficient local government, where the tax-payers pay as little as possible, and get something for their money.”

After purchasing the Desert Inn, Hughes asked Maheu how many more of “these toys” were available to buy. “Let’s buy ‘em all,” Hughes proclaimed.

“Hughes went on a casino shopping spree,” says Jeff Burbank, an English instructor at the University of Nevada, Las Vegas, and the author of three books on the history of Las Vegas. He has written several articles, including recent entries on Hughes, for the Online Nevada Encyclopedia, onlinenevada.org, a multimedia resource produced by Nevada Humanities. The site’s subjects range from documenting the state’s geothermal fields to preserving Reno’s historic street clock to profiling the area’s early settlers.

“In addition to the Desert Inn, in 1967, he bought the Sands, Castaways, and Frontier hotel-casinos for about $60 million,” continues Burbank. In one year’s time, Hughes spent an average of more than $175,000 per day. Hughes’s Nevada buying bender continued the next year, when he purchased the Silver Slipper and Landmark for almost $23 million. “Hughes was Nevada’s largest single property owner at the time, with almost two thousand hotel rooms and 20 percent of the rooms on the Strip under his control,” says Burbank.

As Hughes began racking up casinos, decades of mob ownership on the Strip faded. “His involvement changed the nation’s perception about the gambling business in Las Vegas, and this new respectability encouraged public corporations to buy or invest in Nevada casinos as never before,” says Burbank.

By the late 1960s, in addition to casinos and hotels, Hughes owned a local airline, thousands of acres of Nevada ranching land, and numerous mining claims. A chronic insomniac and movie fanatic, Hughes purchased a local TV station and ordered that movies run all night. Amazingly, he accomplished all of this in the four years he spent at the Desert Inn, never once leaving his suite. Instead of personally making transactions, he divvied out his business and personal needs to a small group of men dubbed the “Mormon Mafia,” who Hughes believed, because of their religion’s ban on drinking alcohol, made better employees.

“Hughes likely suffered from obsessive-compulsive disorder,” says Burbank. He explains, “While secluded in his suite at the Desert Inn, Hughes had the windows darkened to prevent light from coming in. He often sat naked in the dark in a chair. He had piles of Kleenex tissue boxes in the suite, and used layers of tissues to handle door knobs and other objects due to his phobia over germs. He demanded his aides use Kleenex or paper towels to hand him things. For months, Hughes would not bathe. His hair and nails he would have cut only once a year.

“He became obsessed with Banana Ripple ice cream, made by Baskin-Robbins, and ordered the hotel to stock it. However, Baskin-Robbins had discontinued the flavor, and Hughes’s aides had to special-order the smallest batch available from the factory—amounting to two hundred gallons. Hughes later decided he preferred a different flavor, and the hotel was stuck for months with the huge supply of Banana Ripple in its freezers.”

Hughes’s attempt to purchase his seventh casino, the Stardust, was thwarted by the U.S. government, citing antitrust concerns. His game of Monopoly on the Vegas Strip was over. Meanwhile, nuclear-bomb testing sent shock waves through his hotel room, and sewage was polluting nearby Lake Mead, the source for the city’s drinking water. Hughes decided to leave Las Vegas in order to create “an entire new community and way of life in some location where some of the restraints, encumbrances, and competition in this area are not present.”

Hughes was secretly carried out of the hotel on a stretcher on Thanksgiving Day in 1970, exactly four years after arriving, and flown to the Bahamas. He would never return to Nevada, but today he is credited with bringing legitimacy to what was once considered the Mob mecca of Las Vegas.