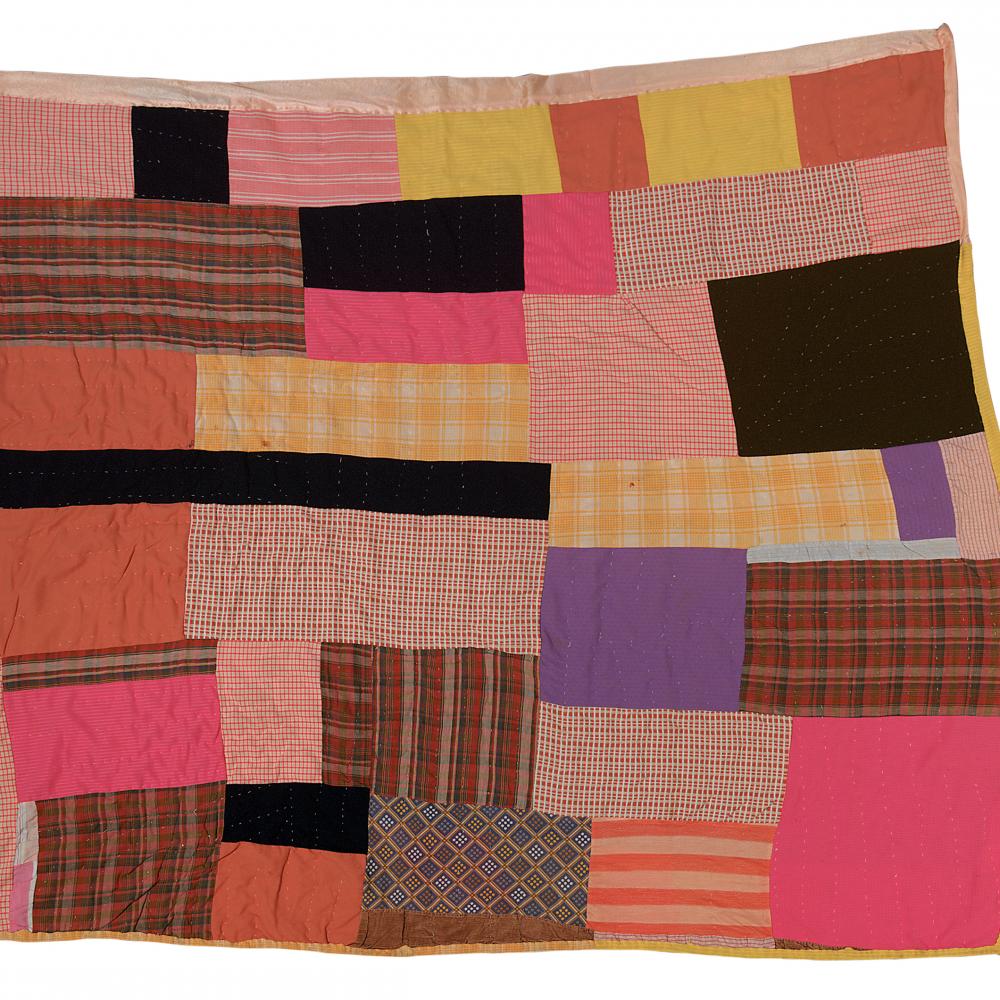 Like many traditional quilts, the ones from Gee’s Bend, Alabama, are made from strikingly humble materials: worn-out denim, tobacco pouches, old bed sheets, fertilizer and feed sacks. But unlike most quilts, these are hung in museums, where their bold and brilliant designs are admired and often mistaken for examples of modernist art. Art of some kind they definitely are. Their exciting color combinations, asymmetrical patterns, and improvised designs may remind viewers of a jazz composition, but their inspiration must be sought elsewhere.

“Although you can obviously see examples of West African textiles, particularly from Ghana and the Ivory Coast, in the quilts, the most iconic colors and patterns are taken from what was around them,” says Corrie Claiborne, a scholar from Claflin University in Orangeburg. “Despite many art historians wanting to call the work of the Gee’s Bend quilters postmodern and abstract, it is clear that because of the isolation of both the landscape and the culture that people were most influenced by their everyday lives or by each other.”

Generations of women have been quilting in this style in Gee’s Bend, an isolated rural community of approximately 750 people, cut off on three sides from the outside world by a bridgeless oxbow of the Alabama River. Located in one of the poorest counties in the nation, the town was named for Joseph Gee, a white cotton plantation owner who settled on the land in the early 1800s with enslaved blacks. The land was acquired by Mark Pettway, a relative of Gee’s, in 1850, who brought one hundred of his own slaves, making them walk there from North Carolina. After emancipation, many former slaves stayed on the plantation as sharecroppers and tenant farmers, bearing the name Pettway, their not-so-distant slave owner.

The town’s isolation was partly man-made. For decades, a makeshift ferry service had been transporting Gee’s Bend residents to Camden, the seat of Wilcox County across the river, to conduct business, get medical care, and buy goods. In the 1960s, the citizens of Gee’s Bend, inspired by a visit from Martin Luther King, Jr., crossed the river to vote and participate in civil rights marches. Afterward, the city of Camden shut down the ferry service; and it was not restored until 2006. Residents had to drive more than forty miles to get to the nearest town; a hardship when most were too poor to own a car.

In 2002, the Gee’s Bend quilts captured the attention of the art world when they were first shown in a major exhibit at the Museum of Fine Arts in Houston. The New York Times praised the exhibition as “some of the most miraculous works of modern art America has produced.” The quilts were drawn from the collection of Tinwood Alliance, Atlanta, a nonprofit foundation that supports African-American vernacular art, founded by William Arnett.

“A Survey of Gee’s Bend Quilts,” a new exhibition of twenty-five quilts dating from 1949–2006, is on display at the Franklin G. Burroughs-Simeon B. Chapin Art Museum in Myrtle Beach through Oct. 3. Claiborne gives several presentations at the museum during July and August.

One of the other speakers is author Irene Latham, who arrived in New York City the day the exhibition was closing at the Whitney Museum of American Art. “When I first viewed the quilts, I was overwhelmed by the textures and colors and boldness of the design. Then when I read the history of this tiny, isolated place, it just spoke to me of home and strength and survival and family and love.” Latham went on to write Leaving Gee’s Bend, a novel for young readers.

Based on real events, the book is set in 1932, a year of great hardship for the town. According to history, the recent widow of a Camden merchant recalled all the outstanding loans made by her husband, who had sold seed, equipment, and necessities on credit to the residents. When the debts could not be paid, the widow confiscated everything. Families watched as their furniture, food, mules, chickens, tools, wagons, sugar cane, and seed—anything not nailed down—were hauled away. Left to starve, the people of Gee’s Bend barely survived the cold winter on berries and the occasional squirrel. In early 1933, the Red Cross arrived with food and clothing. Yet the women kept quilting.

“All my life I’d watched my mother create beauty out of plain pieces of fabric, and here were these women in an entirely different environment doing the exact same thing,” says Latham. “What I have discovered . . . is that we are bound through the act of creation.”

On the elusive Cleopatra.