The Martyr and the Traitor: a Q&A with Virginia D. Anderson 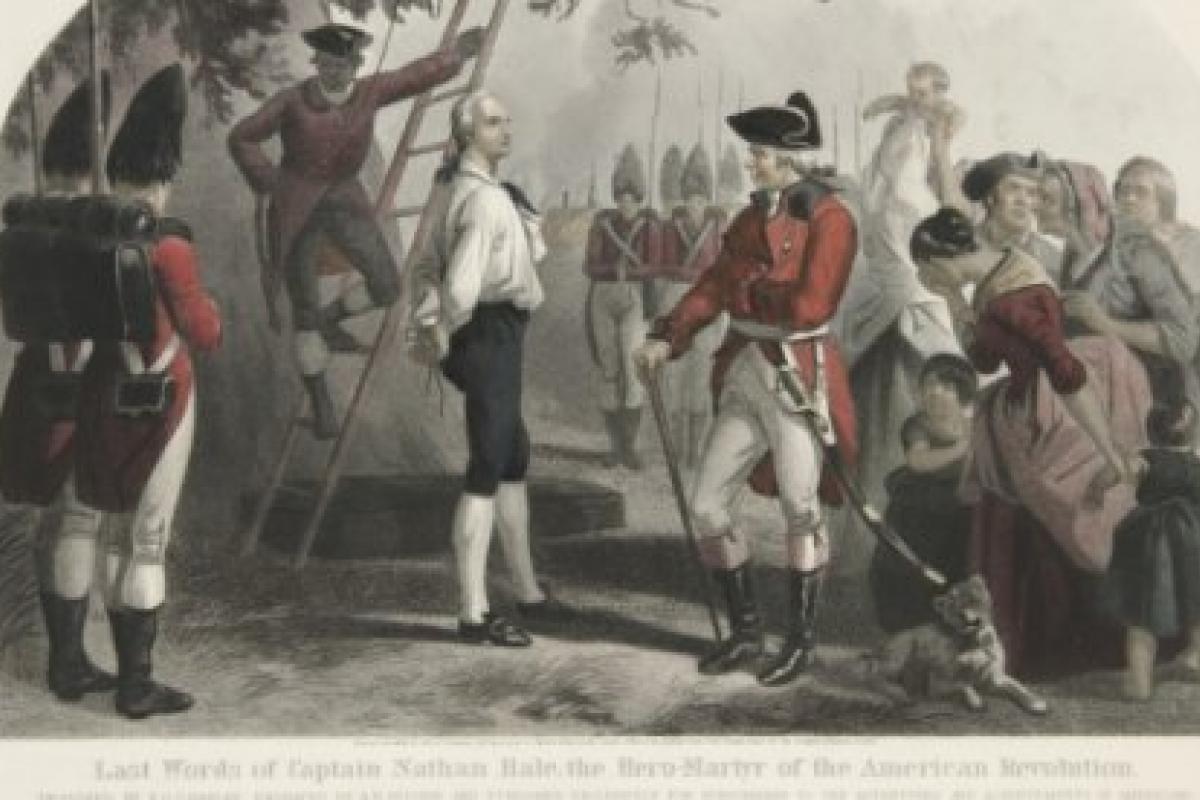 Patriot or loyalist—how did people choose sides during the American Revolution? In Colonial Connecticut the question of political allegiance on the eve of revolution was a complicated one. Professor Virginia D. Anderson’s latest book, The Martyr and the Traitor: Nathan Hale, Moses Dunbar, and the American Revolution, follows Hale and Dunbar, two Connecticut men with opposing political allegiances. The book, which received NEH support, looks for an answer to how those allegiances formed.

I caught up with Professor Anderson by email to learn more about this latest project.

JG: Given the wealth of early American characters about whom one could write, why Nathan Hale and Moses Dunbar?

VA: I first learned about Moses Dunbar years ago, when I was an undergraduate at the University of Connecticut and wrote a research paper about anti-loyalist legislation in Connecticut during the Revolution. In several of the secondary sources I used, Dunbar was mentioned in passing as the only Connecticut loyalist convicted by a civil court of treason and executed. No one explained why he was the only one, and I wondered why that was so. When I went on to graduate school and began my teaching career, my interests shifted to topics in seventeenth-century colonial history, but I never forgot the mysterious Moses Dunbar and was determined one day to write his story. Preliminary research showed that there wasn’t quite enough material to warrant a book solely about him, so I decided to pair him with another Connecticut farmer’s son who chose the other side in the Revolution and yet suffered a similar fate—Nathan Hale. Pairing the two men gave me the opportunity to construct a richer narrative about how colonists made political choices and also to address questions about why we remember some historical figures and forget others.

JG: I had never heard of Moses Dunbar, and I imagine most readers will be in the same boat. What can we learn about social networks and political allegiance during the American Revolution by studying someone like him?

VA: Perhaps the most challenging part of this project was figuring out why Dunbar got into trouble. His father and brothers supported the Revolution, so why didn’t he? The one difference between Moses and his birth family was that he alone decided to join the Church of England, so I guessed that his loyalty to Britain was somehow related to that. But the connection was not straightforward. First, he became an Anglican around 1764, before the crisis with Britain began. Second, plenty of Anglicans—including George Washington—were patriots, so religious affiliation itself didn’t explain Dunbar’s loyalism. Dunbar’s initial engagement with a social network of fellow Anglicans had nothing to do with politics, but the growing imperial crisis made Connecticut Congregationalists (members of the colony’s established church) suspicious of the political loyalties of fellow colonists who belonged to a Church headed by the British monarch. Thus, non-Anglicans were the main driving force behind the politicization of Dunbar’s social network, not the Anglicans themselves. Although individuals chose a political allegiance, that decision depended on a number of factors, including the choices of the people with whom those individuals associated most frequently. And that choice, as the case of Dunbar and his fellow congregants shows, might represent coercion as much as free will.

JG: How does your book relate to other scholarship on the American Revolution? What elements are a continuation, and what elements do you consider new or different?

VA: Scholarship on the Revolution has recently begun to address questions of violence and civil discord, and my book fits with this trend. The Martyr and the Traitor may strike some readers as old-fashioned because of its focus on two white men in New England, at a time when much current scholarship looks at other geographical regions and incorporates the experiences of Native Americans and African Americans. However, one of my main themes is that civil discord occurred even in a comparatively homogenous place like Connecticut, and was not a factor only in regions with greater social and ethnic diversity. Moreover, my two main characters were ordinary men, and thus the book runs counter to a persistent scholarly emphasis on the Founders. Another distinctive feature of the book is rooted in my effort to go beyond a Revolutionary historiography that often divides into camps arguing either for ideological or social causes behind individuals’ political choices. I have tried to show how a wide variety of factors—including quotidian personal experiences and social contacts—were involved in such decisions, making it difficult to isolate a single element of causation. Finally, mine is one of the very few books to discuss the reintegration of loyalists into an independent nation; most studies of loyalists focus on those who fled to other parts of the British Empire after the war.

JG: You write that in your narrative Dunbar is a quieter presence than Hale, due largely to a lack of documentary evidence. What are the difficulties associated with searching for evidence?

VA: Historians overwhelmingly rely on written documents, and non-elite people in the past simply generated less of them. Letters, for instance, are great historical sources, and were key to the depiction of Hale in my book. But people write letters when they are separated from those with whom they want to maintain contact; those who stay home—like Dunbar—have no need for them. This makes it particularly difficult to ascertain the personality of a historical figure such as Dunbar. He did produce less overtly personal material, such as land deeds and court records. These documents offer evidence about economic status and property, or legal concerns, but it takes an extra measure of historical imagination to add a more subjective interpretation without going too far beyond the evidence itself. The skimpy record of Dunbar’s land transactions demonstrated his limited economic resources, for example, but they also testified to his continual striving for improvement and his desire to support his family. These features of his character shaped his fate more generally, but the documents hint at this rather than address it outright.

JG: At some moments you seem to address the problem of Dunbar’s relative silence by piecing together evidence that, while not penned by Dunbar himself, paints a probable picture of his life. What are some of the strategies historians use when there are gaps in the historical record?

VA: The main strategy is to look at context, the factors that shaped the world in which your main characters lived. What can we learn about their families and communities?  What events affected their experiences?  I tried to paint a portrait of small town agrarian life to show the circumstances in which Moses Dunbar lived. When it came to the drama of his arrest and treason trial, I looked at similar cases that all had different outcomes. This helped me to assess the significance of his execution, by showing, for instance with the example of Gurdon Whitmore, how having a lawyer might have led to a different outcome for Dunbar. One of the other challenges in writing this book was trying to figure out how to work in background information about the imperial crisis with Britain and the Revolutionary War to make the book accessible to the general reader, without turning it into a textbook narrative. I decided to focus on how these major events affected Connecticut, and incorporated accounts of such events as the Stamp Act crisis, the Townshend Acts, etc., into the Dunbar chapters (because of the skimpy evidence about him). This allowed me to refer briefly to the same events in the Hale chapters, noting how people who took different political sides might view those same events quite differently.

JG: What does a typical day in the archives look like?

VA: My typical day doubtless differs from that of younger scholars. I try to figure out ahead of time what collections or materials I want to examine. Online catalogues make this a lot easier, because if you have to travel to visit an archive, you can concentrate your time there on actually looking at the documents. Nowadays, scholars often photograph documents in the archives (if this is allowed) and wait to read them later. I’m old-fashioned; I prefer to read the documents right away. I often copy them out in longhand. This tends to cement the material in my memory—an important consideration if, as in the case of this book, the project will take several years to complete. I may forget which file folder contains what I need, but I’ll remember what nugget of information I want. I still get a thrill from touching old documents. I’ll never forget the first time I picked up the “Papper found in Dunbar’s Pocket” (reproduced in the book) that led to his conviction. Holding a piece of paper that Moses Dunbar once held in his hand somehow made him seem overwhelmingly real to me as no other aspect of the research did.

JG: Who do you hope reads your book?

VA: Everyone!  In all my writing, I strive to make the narrative accessible to a general and not just academic audience. I worked particularly hard for this book, as I think the stories of Dunbar and Hale could encourage readers to think differently about the Revolution, to see it as a morally as well as politically complex process.

JG: Finally, what are you working on now?

VA: To be absolutely honest, I would love to see a movie made about Moses Dunbar. I have no idea how to make that happen, but I’m going to investigate it. As for another book, I’m thinking about a “life and times” biography of Daniel Gookin. Born in England in 1612, he was involved in the settlement of both Virginia and Massachusetts, was unusually sympathetic (at least in 17th-century terms) to the Indians, and also owned at least one slave. Such a project would allow me to explore many themes in colonial history: the Atlantic world, Puritanism, Indian relations, and slavery.

Virginia DeJohn Anderson is a Professor of History at the University of Colorado, Boulder. She specializes in Colonial and Revolutionary America and has written about such topics as domestic animals in early America and society in 17th-century New England.

Dr. Anderson was awarded an NEH Fellowship (FA-54998-10) and a Summer Stipend (FT-54239-06) to research The Martyr and the Traitor: Nathan Hale, Moses Dunbar, and the American Revolution (Oxford University Press, 2017).