The Founding Fathers in a Digital Age 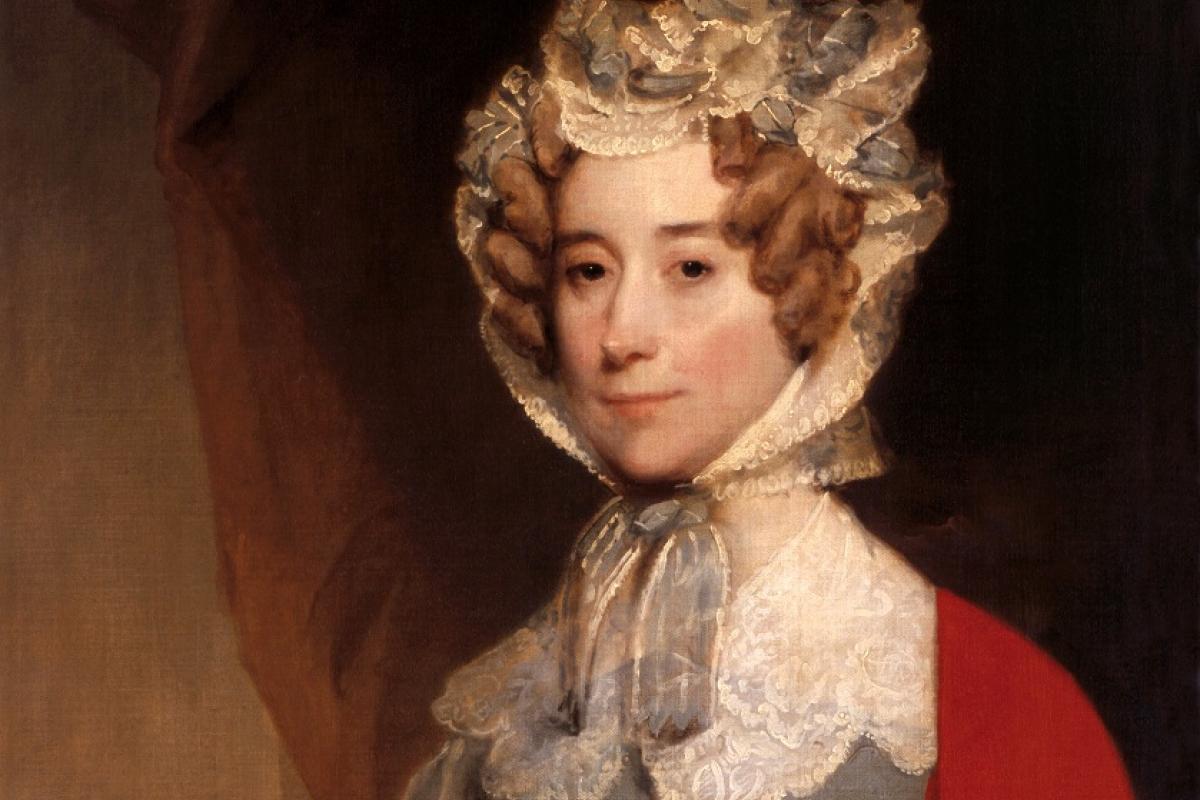 Louisa Catherine Adams, by Gilbert Stuart, circa 1821-26. Louisa was about 50 years old at the time this was painted, during John Adams's term as President. This portrait is currently in the White House.

Image credit: The White House Historical Association, via Wikimedia Commons. Oil on canvas. This image is in the public domain.

The Founding Fathers are everywhere. The faces of Washington, Jefferson, and Franklin are on our money. Their names are on our streets, cities, counties, and states. Their ideas continue to shape our government and society.

But these men are more than just marble statues or big ideas. They were human beings, with families, friends, and businesses. We can connect to these human beings through their papers—personal letters, private diaries, even financial records. Documentary editors do the big job of assembling these papers into accurate and accessible editions, accumulating materials from libraries and private collections and making them available to the public in print or in digital form. Because of the meticulous care required and the hundreds of thousands of documents to be reviewed, many of these editorial projects take decades to be completed.

The value of these editions and their editors has been highlighted by the debut of Founders Online, a free and open portal to the letters and papers of six Founding Fathers: George Washington, Benjamin Franklin, John Adams (and family), Thomas Jefferson, Alexander Hamilton, and James Madison. Sponsored by the National Archives and hosted by the University of Virginia Press, the portal includes over 149,000 searchable documents, fully annotated, from the authoritative Founding Fathers Papers projects. Five of these six projects (all but Hamilton) are still in process, and those five have received long-term support from the National Endowment for the Humanities, as well as generous funding from the Packard Humanities Institute and other private foundations.

We asked two veteran editors to reflect a bit on the unique nature of documentary editing. Barbara Oberg is general editor of the Papers of Thomas Jefferson, which published its first volume in 1950. Since 2002 C. James Taylor has been editor-in-chief of the Adams Papers, a long-running edition of the papers of John and Abigail Adams and their children and grand-children.

C. James Taylor is Editor-in-Chief of the Adams Papers. Barbara Oberg is General Editor of the Papers of Thomas Jefferson.

Tell us about your relationship, both personally and editorially, with your subject. What surprised you about them?

BBO: I like Jefferson for his inquisitive mind, his sheer intellect, and the way he approaches problems--whether they deal with such questions as how "new" citizens can be absorbed into the culture and values of the country after the acquisition of Louisiana or the questions that Meriwether Lewis's exploratory trip across the country was designed to answer, or what ancient bones can tell us about the beginnings of civilization. He is a natural philosopher in the true 18th century meaning of the term.

CJT: Unlike most of the other founders’ editorial projects, there is no single central figure in the Adams Papers. Also, this edition differs from most in that it is multi-generational and has a chronological sweep that covers more than a century. The members of the family that intrigue me now are John Quincy and Louisa Catherine. The textbook version of John Quincy as a driven, dour, taciturn New Englander does not hold up. He was a much more interesting person than I had assumed. Seeing him as a father and husband, away from his strict public life, makes him a much more human figure. He was probably the most complex of all the Adamses and perhaps the most complex statesman of his generation. His diary, unrivaled for detail and continuity, is the most important document of the kind. Seeing him through the writings of his wife, from their courtship to his death, however, provides a much different impression of the man. Critical, yet sympathetic, just as Abigail helps us better understand John; Louisa Catherine’s papers offer a more human John Quincy.

BBO: It is a tough responsibility even to try to get things right, so very right, as the editor is supposed to do. So much is asked of editors, such high expectations for their accuracy, almost to the state of perfection seems called for, and the impossibility for any of us to be perfect. It is terrifying, I think.

CJT: The challenge faced by all documentary editors is to publish the most accurate documents possible and to provide the best access to them. Over time the charge to publish accurate documents has remained constant. What has changed is the mode of access. Since the early 1960s, fifty volumes have been published, with many more to go before completion of the edition. In the last ten years, the published volumes have been digitized and appear on the Massachusetts Historical Society website as the Adams Papers Digital Edition. This conversion of our work from print to electronic form was initiated with an NEH grant. Since that first step, the Adams Papers have become available as a part of larger digital collections; the most recent being the National Archives’ Founders Online site. Every plan that we make concerning publication now takes into account how to provide the best electronic access.

BBO: I think the challenges are even greater because, with so much on line, expectations have risen. The challenges for receiving funding to carry on the work and pay salaries to the other editors on the project have grown substantially. It becomes a greater responsibility and can take over the time that used to be available for the scholarly work of documentary editing. Now a great deal of time is spent on applying for grants and then preparing progress reports, time that it would be nice to put into scholarly editing.

What are the implications for the public in having these materials available online?

CJT: The launch and continuing enhancements of the Adams Papers Digital Edition, with support from the NEH, places the Adams Papers in the forefront of online editions and provides an encoding model for other papers projects. Housed at a public cultural institution, the Digital Edition engages both the Adams Papers Project and the Massachusetts Historical Society within the broader context of digital humanities in academia and beyond. These connections facilitate a more expansive reach of the project and exchange of ideas with a larger community of scholars, students, researchers and technicians.

BBO: The public humanities are central to the nation, and having Jefferson's papers all available in digital form will be a monumental boon to the nation. We are no longer living in the 20th century. Jefferson would be pleased to see his papers available to all -- at no cost to the user, possible because of a partnership between the government (NEH and the National Historical Publications and Records Commission) and private individuals and foundations (including the Packard Humanities Institute). This can only be good for the public humanities.