Flinging a Pot of Paint: James McNeill Whistler and the Case for Beauty

"James McNeill Whistler and the Case for Beauty," directed by Karen Thomas, broadcast September 12, 2014, on PBS as the premiere offering of its Arts Showcase series. 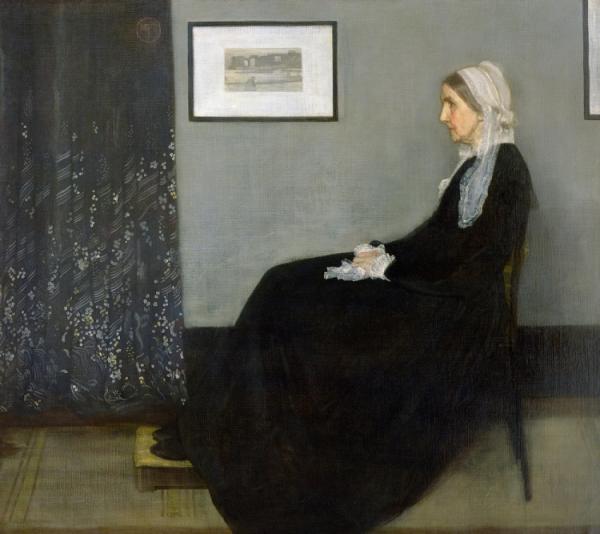 Whistler’s Mother, revered icon of American motherhood. The portrait, painted in 1871 by James McNeill Whistler, did not acquire this status until the Great Depression, when it was loaned by the Louvre for exhibition in the U.S. The image resonated with the nation’s nostalgic yearning for the security of simpler times and so embodied the maternal ideal―humble, virtuous, enduring―that FDR chose to reproduce it on the 1934 Mother’s Day postage stamp. Four years later, the city of Ashland, Pennsylvania, made the figure a larger-than-life bronze statue with the inscription, "A Mother is the Holiest Thing Alive.” Who could imagine that when the artist first exhibited the painting in London, art critics would be baffled and dismayed by this “vacant” composition, this odd “experiment of an eccentric,” this cold and uncaring portrait?

Victorian England expected other things from art:  edifying stories, moral lessons, romantic sentiment, grand style, or meticulous technique. Whistler rejected all of this. He wanted to paint the aesthetic experience itself, a category of beauty beyond nature or morality, existing purely for its own sake. The titles he gave his works signal his intention to create compositions whose harmonies of form and color were akin to music: Arrangement in Grey and Black, Nocturne in Blue and Silver, Symphony in White, Harmony in Blue and Gold.

Whistler’s emphasis on the abstract qualities of art make him a forerunner of Modern painters like Mondrian, Hans Hoffman, and Mark Rothko. But he never abandoned nature or recognizable forms, and his works are not devoid of content. He was able to calculate the weight a recognizable object carried in addition to its abstract qualities, and factored that into the structure of his compositions.

The portrait of his mother seems static and simple. But this is true only when looking at the picture with the practical vision that allows us to function in the world by quickly identifying objects and actions. If this literal vision weren’t automatic, few of us would survive crossing a busy street. Aesthetic vision is untethered from the literal and keeps looking, allowing the abstract, visual qualities of objects to come to the fore and taking pleasure in how they interact.

For example, in Whistler’s large canvas we are drawn to the woman’s face, which logic tells us is closer than the wall. The framed etching in our peripheral vision tugs at our attention because of the brightness of the white and because framed pictures demand we look at them. But the longer we look at the etching, the more it appears to move, its position not completely fixed. The woman’s face, now at the periphery of our vision, seems to move back toward the wall.

The subtle control that keeps this composition taut from edge to edge becomes obvious if anything is changed. For instance, if the sliver of framed picture at the right is covered, the woman seems to jut her head more to the left, and our curiosity about the object of her stare—which now looks more intense—pulls us to the left and out of the composition.

Whistler knew the potential market for his art and how to reach it. Publicity-savvy, he made himself a celebrity through the persona of a dandy, a witty and combative proponent of art for art’s sake. In 1877, when art critic John Ruskin criticized Whistler’s Nocturne in Black and Gold: The Falling Rocket, as “flinging a pot of paint in the public’s face,” the artist sued for £ 1,000 in libel damages, hoping to use the trial as a forum to make a substantial argument for his art, his “case for beauty.” Whistler won the suit, but was awarded the disdainful sum of one farthing by the judge. The trial served well enough as a podium to announce Whistler’s vision of art, but turned out to be a poor format for showing the public how to experience it.

James McNeil Whistler and the Case for Beauty received two grants from the Endowment.