Convicts in Barracks, from Slavery By Another Name

CREATED EQUAL brings together four nationally-acclaimed films that tell the remarkable stories of individuals who challenged the social and legal status quo, from slavery to segregation. Rare archival footage gives us glimpses of the long Civil Rights movement never before seen on film. 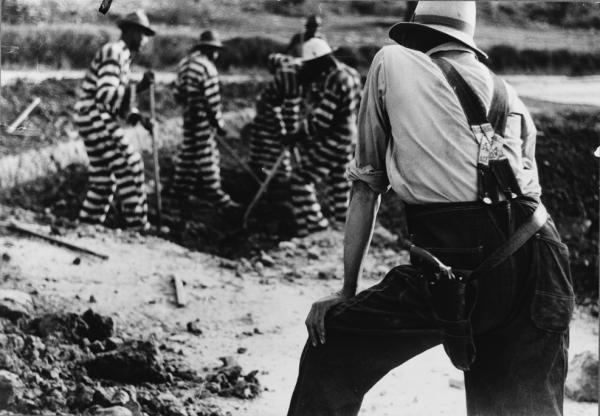 Overseeing Convicts, from Slavery By Another Name

– “These four films illustrate the majesty of the civil rights movement:  Millions of ordinary brave Americans rose up, said  ‘no more,’ and changed the nation forever.”

The NEH “Created Equal” project uses the power of documentary films to inspire public conversations about the changing meanings of freedom and equality in America. Launched in 2013 as the nation marks historic anniversaries of the Emancipation Proclamation and the March on Washington, “Created Equal” is produced in partnership with the Gilder Lehrman Institute of American History. As part of the Endowment’s Bridging Cultures initiative, “Created Equal” encourages communities across the country to revisit the history of civil rights in America and to reflect on the ideals of freedom and equality that have helped bridge deep racial and cultural divides in our civic life. Four outstanding documentary films supported by NEH, spanning the period from the 1830s to the 1960s, are the centerpiece for this project:

This film vividly brings to life the struggles of the small group of reformers in the 1830s who launched one of the most ambitious social movements imaginable: the immediate emancipation of millions of enslaved African Americans.

Even after slavery, new forms of forced labor kept thousands of African Americans in bondage until the onset of World War II.

This film offers an inside look at a pivotal moment in the Civil Rights struggle, when a brave band of activists challenged segregation in the Deep South.

Richard and Mildred Loving were arrested in 1958 for violating Virginia’s ban on interracial marriage. Their struggle culminated in a landmark Supreme Court decision, Loving v. Virginia (1967).

Wherever the “Created Equal” films have been viewed, they have begun a conversation. In public libraries, in school classrooms and churches across the nation, on Twitter, blogs, and Facebook pages, viewers have been moved to continue talking about the themes raised by these films and to connect their own lives and experiences to this powerful history of heroism and struggle. The “Created Equal” project extends and deepens those discussions, offering scholarly resources and program guides to help Americans to reflect on the legacy and meaning of our shared Civil Rights history. “Created Equal” film sets will be featured in screenings, discussions, and other public programs in 473 communities across the nation from September 2013 through December 2016.

The 473 venues for Created Equal film screening programs will each receive an award of up to $1200 to support public programming interpreting the themes of the film series.

“Created Equal” grows out of the NEH’s longstanding support for Civil Rights scholarship. See a related article in Humanities Magazine. For a list of NEH-supported projects on Civil Rights history by state click here.

The Created Equal project is supported by a cooperative agreement with the Gilder Lehrman Institute of American History.