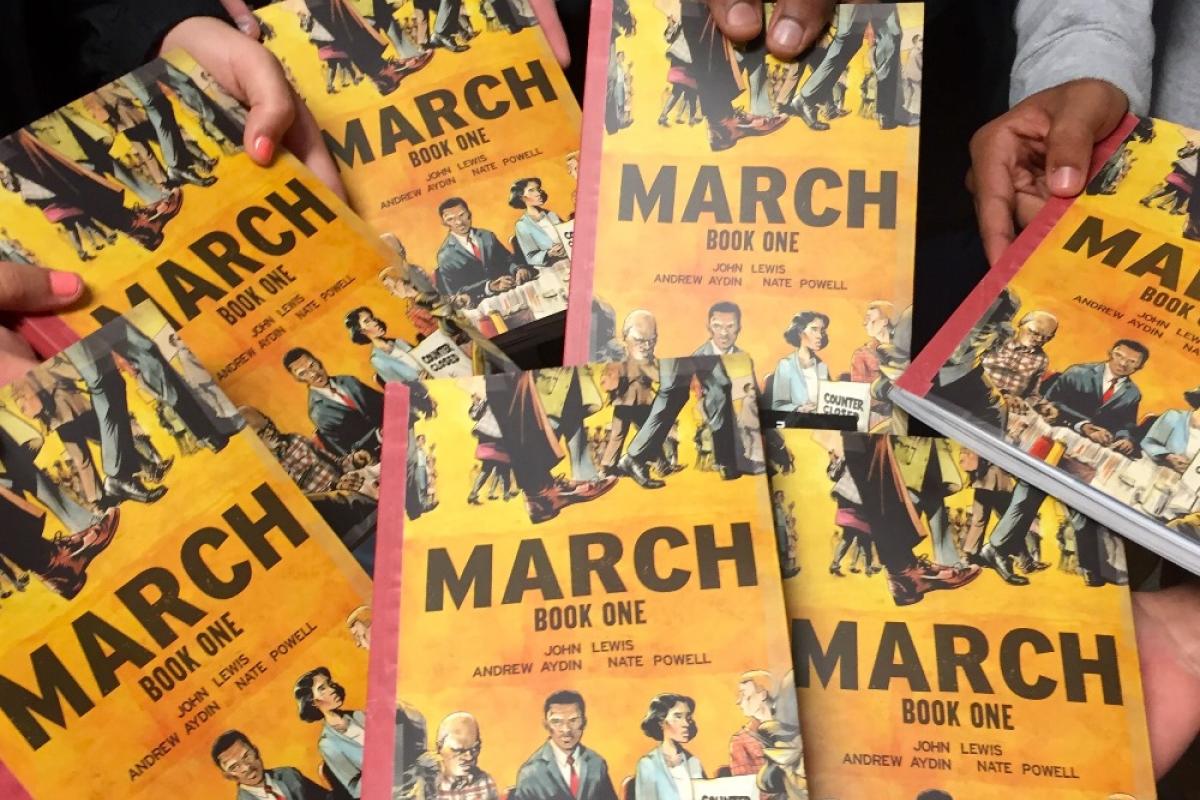 In recognition of the Endowment’s ongoing support of libraries, the American Library Association’s 2016 Annual Conference celebrated the Endowment’s fiftieth anniversary with a special session that highlighted the NEH-funded Great Stories Club project. The event featured March, the first in the graphic novel trilogy created by Congressman John Lewis, Andrew Aydin, and Nate Powell. The novel tells the remarkable story of Lewis’s childhood in Alabama through his early student activism and brings to life the nonviolent movement he helped to lead more than fifty years ago. At the event, NEH Chairman William Adams emphasized the vital role libraries play in our democracy: “There is no democracy without the act of memory.” He encouraged libraries to continue to preserve and share the history of the civil rights movement. Congressman Lewis shared stories about growing up on a sharecropping farm and his important civil rights leadership. He described how, as a child, he was not given a library card, a privilege only afforded to white patrons at his library. He asked the 1,000 librarians in attendance to “keep the faith” and to dedicate themselves to equality and inclusion for all, “Through information—through books—we must find a way to set down the burden of hate.” Aydin discussed his early political work and his passion for presenting Lewis’s biography as a graphic novel after reading the 1957 comic book, Martin Luther King and the Montgomery Story. Powell described his personal connections to the story and his work as an illustrator. A book signing with Lewis, Aydin, and Powell followed the event. 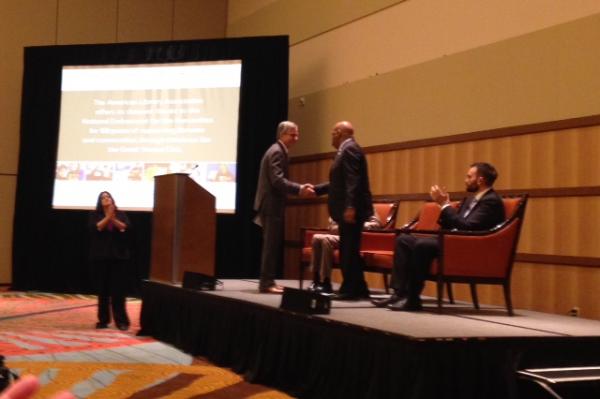 A full-day workshop was held during the conference for recent Great Stories Club grantees and featured project scholars Maria Sachiko Cecire, Director of Experimental Humanities and Assistant Professor of Literature, Bard College, NY; Nick Higgins, Director of Outreach Services, Brooklyn Public Library; and Laura Rogers, Director of the Writing Center and Assistant Professor, Department of Humanities, Albany College of Pharmacy and Health Sciences. Titles in this round of the Great Stories Club, The Art of Change: Creation, Growth, and Transformation, include: Buck: A Memoir, by M.K. Asante; The Absolutely True Diary of a Part Time Indian, by Sherman Alexie; and Persepolis, by Marjane Satrapi.

The Great Stories Club provides at-risk teens the opportunity to read, reflect, and share ideas on topics that resonate with them. Through local libraries, the program brings accessible and thought-provoking literature selected by humanities scholars to youth struggling with difficult issues like incarceration, violence, and poverty. Organized by the American Library Association (ALA) the program has reached 700 libraries in forty-nine states and more than 30,000 young adults (ages twelve to twenty-one) since 2006. In 2015, ALA received an NEH grant to continue programming at an additional 225 sites around the country. Each reading and discussion program includes works of young adult literature—novels, memoirs, and graphic novels—and the current themes are 1) Media (how young people interact with mass entertainment and information systems), 2) Change (how individuals experience voluntary and involuntary change), and 3) Violence (the roots and consequences of violence).