A Wishbone Gift and the Cranberry’s Rights: Celebrating the Holidays with Chronicling America 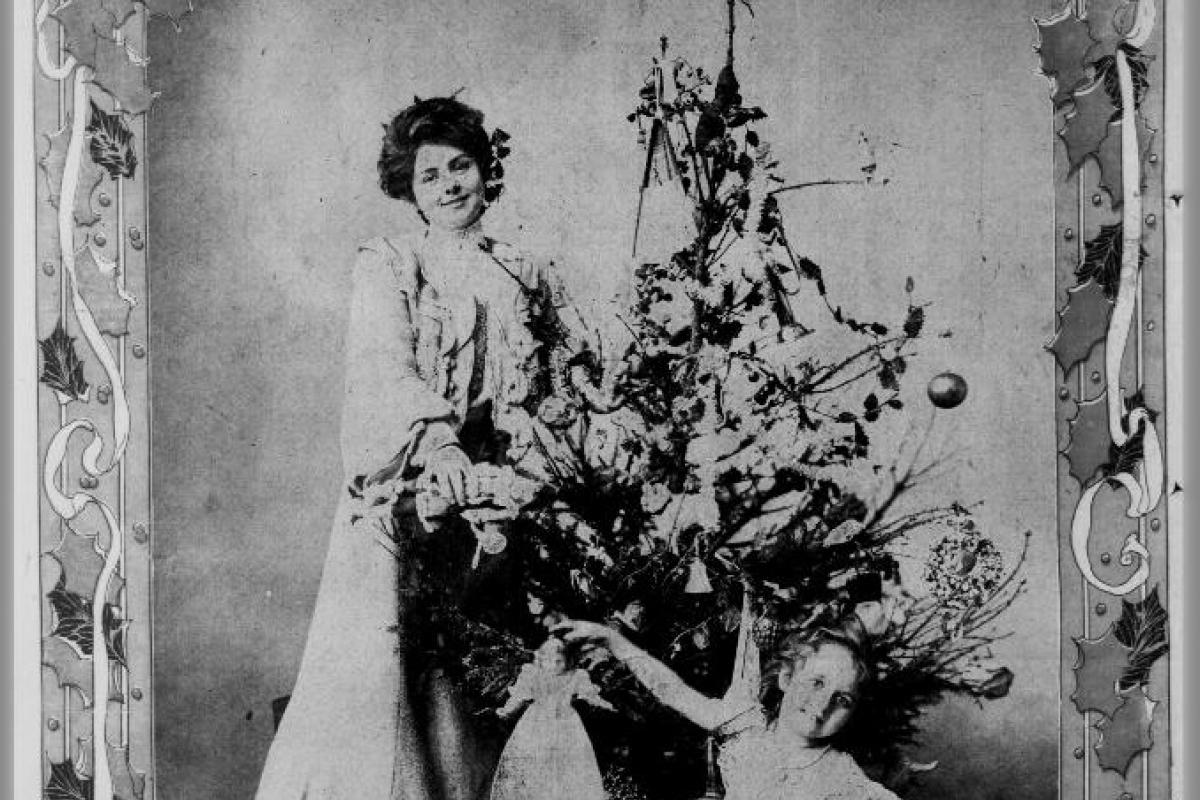 According to a 1903 article in the Saint Paul Globe [St. Paul, Minnesota], Thanksgiving is “an Inspiration Peculiar to the Nation.”  The florid, sometimes historically accurate, history of the holiday is accompanied by a drawing—peculiar itself—of football playing, turkey carving, and ice skating.  Historic American newspapers like the Globe are chock full of details about the history and texture of American life.  We took a look in Chronicling America, the open access database of historic newspapers created by the National Endowment for the Humanities and the Library of Congress, to find out what Americans in past times did, and how they saw themselves, during the winter holidays.

Babies Carving Turkeys and a Sermon on Onions

Thanksgiving is all about turkey, of course, and we found many ads for the holiday’s trademark dish.  It’s not entirely clear why there is a baby carving the turkey in a 1907 Colville Examiner [Colville, Washington] advertisement, but the store does promise a free turkey to anyone spending $15 on groceries.  And the 1939 Greenbelt Cooperator [Greenbelt, Maryland] urged customers to get their Thanksgiving turkeys early unless they were planning to “be a pilgrim” and shoot their own. 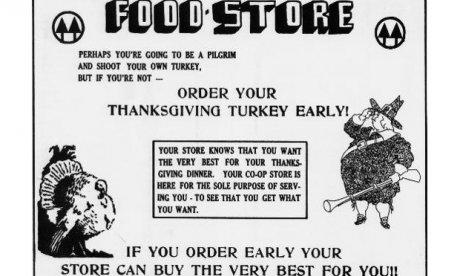 Historic newspapers show how holiday sensibilities changed over time as well.  A 1911 ad from the Topeka State Journal [Topeka, Kansas] confidently asserted that “Thanksgiving dinner demands butter.”  A few years later, at the height of the First World War in 1917, the New York Tribune [New York, New York] taught people how to use “maple foam” instead of scarce white sugar.  The Tribune kept up this theme after the war, scolding readers in 1920 about the importance of using seasonal foods, delivering not only a “Sermon on Onions” but also the “Cranberry’s Rights” to be eaten frequently all winter. 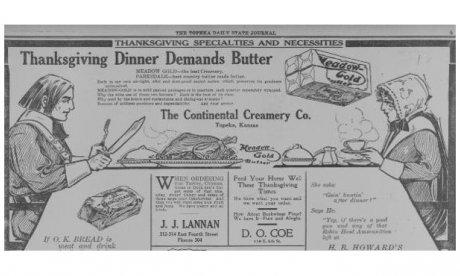 Then as now, newspapers also focused on family during the holidays.  A sad cartoon in the Marion Daily Mirror [Marion, Ohio] shows a son away from his family on Thanksgiving for the first time.  Perhaps because of social changes, the cartoon was popular, and was reprinted in newspapers across the country in 1908. 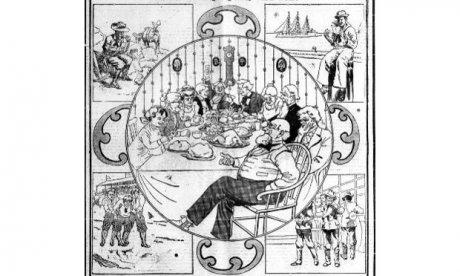 How to: Repurpose the Thanksgiving Turkey Wishbone in Your Christmas Gifts

Newspapers often printed local news all year round—not just major events and announcements, but also residents’ plans and doings.  For Christmas, this involved sharing holiday schedules.  So the “Happenings and Whereabouts” in the 1914 Goodwin’s Weekly [Salt Lake City, Utah] (motto: “a thinking paper for thinking people”) listed which young ladies were coming home to spend the holidays with their families, and where local residents would travel.

Holiday gift guides are pretty common these days, but this is nothing new—they were everywhere a century ago as well.  For example, the 1909 East Mississippi Times [Starkville, Mississippi] suggested “Yuletide gifts for ladies and men,” including diamonds in many formats for both, as well as belt pins and fans for the ladies and shaving mugs and ink stands for the men.  And for the kids, a freight train or a teddy bear was always popular, or even a shoofly or a rolly polly, if one were buying [Breckenridge News, Cloverport, Kentucky].  For those more inclined toward the homemade, the Midland Journal [Rising Sun, Maryland] had instructions for painting a coat hanger with a staring man, as well as a wishbone thimble case made from the wishbone of the Thanksgiving turkey. 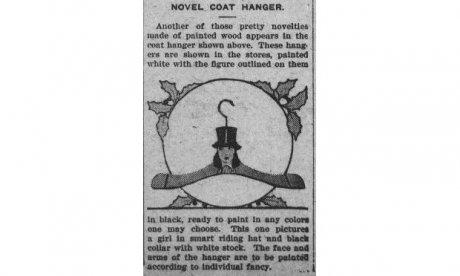 Menus were also plentiful this time of year.  From the Bridgeport Evening Farmer’s [Bridgeport, Connecticut] “Woman’s Home Page,” how about some tomato aspic in a cracker fort, or creamed fish in cucumber shells, for your holiday lunch?  Or from Montana, a menu in the Ekalaka Eagle [Ekalaka, Montana] including boiled smelts, roast venison, and perhaps surprisingly the southern staple fried hominy.  And finally, maybe the oddest of all, the Evening Star [Washington, D.C.] newspaper suggested some turkey substitutes “for health and thrift.”  These were not vegetarian or fish alternatives to meat, as one might expect, but rather suggestions including mock wild duck (made from roast steak and lambs’ kidneys) and mock possum (made from inexpensive cuts of pork). 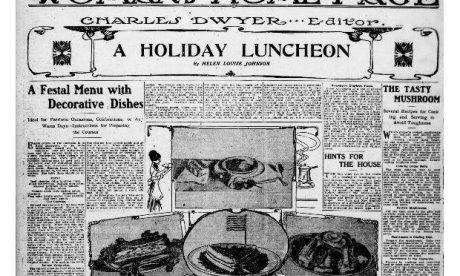 There is also representation of Chanukkah activities in the newspapers, especially in publications like Texas’s Jewish Herald [Houston, Texas] and Jewish Monitor [Fort Worth-Dallas, Texas].  Other newspapers mentioned the Jewish “festival of lights” alongside Christmas activities, like a play announced in the Minneapolis Journal [Minneapolis, Minnesota] or this lecture at Adas Israel, one of Washington, D.C.’s oldest congregations, featured in the Evening Star [Washington, D.C.].  And a discussion of the traditional spinning “trendel” in the Day Book [Chicago, Illinois] reveals that German word for our more common dreidel. 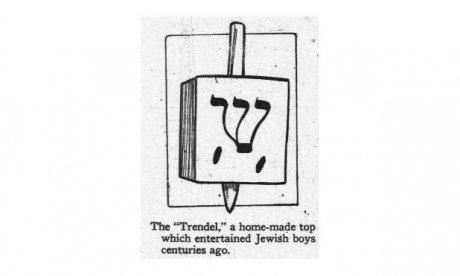 The Right Way to Ring in the New Year

People have made New Year’s resolutions for a long time, and the newspapers of this era sought to assist.  The Clio Messenger [Clio, Michigan], had a laundry list of recommendations.  Stop procrastinating.  Clean your house.  Be cheerful.  Go to the dentist.  All good suggestions despite the article’s somewhat scolding tone. 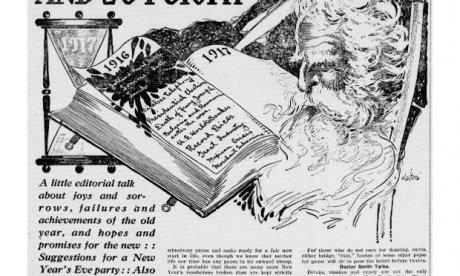 There are superstitions surrounding New Year’s as well, especially when it comes to food.  The tradition of eating black eyed peas is well known, but how about eating twelve grapes, one for each month, just as the clock struck midnight, as recommended in the 1933 Midland Journal [Rising Sun, Maryland].  Or a “wassail” from the Topeka State Journal [Topeka, Kansas]: simmer spices in sherry and sugar, add twelve egg yolks and six whites, and drop in six peeled, roasted apples.  This to be served with oyster cocktails, oyster soup and croquettes, and chicken with oyster sauce (oysters being another lucky food). 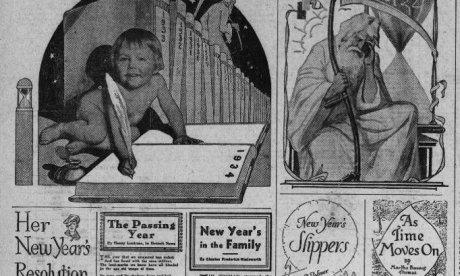 Beyond food, the Bamberg Herald [Bamberg, South Carolina] listed dozens of points of “New Year’s Lore” from around the world.  It’s lucky to get up early on New Year’s morning.  If you wash clothes on New Year’s Day, you’ll wash a friend away.  If the first person you speak to on New Year’s morning has his hands in his pockets, you’ll have a hard time getting money all year.  How to bring luck?  Cook cabbage.  Exchange decorated apples stuck on three skewers.  Burn all of the visiting cards you have received throughout the year.  And for those wishing to take their romantic fates into their own hands, on New Year’s Eve as the clock strikes 12, repeat “Good St. Anne, good St. Anne, send me a man as fast as you can,” and be engaged within the year!

And, finally, the New York Tribune [New York, New York] described how in a restaurant, just before midnight on New Year’s Eve, all of the festive lights were turned out so revelers could hear the church bells chime.  Then the lights were reignited and “all spring to their feet and drink a toast to Father Time’s latest baby.”

A lot has changed, but a lot remains the same for Americans celebrating the holidays.  Search for your favorite holiday or celebration in Chronicling America’s 12.5 million digital pages today!  And Happy Holidays!