This post is part of our “Tune In Tuesdays” series, highlighting some of the projects NEH has supported to preserve and provide access to rich audiovisual materials important to humanities research, teaching, and the public interest. We are also proud to announce a NEH symposium on audiovisual preservation to be held on September 30, 2016, in Washington, D.C. Information about the event, called Play/back, can be found here.

The ethnic heritage and immigration history of the Upper Midwest (Minnesota, Wisconsin, Michigan, Illinois, Iowa, and Indiana) is richly expressed through the region’s varied musical cultures. The many languages and cultures of indigenous and immigrant peoples have frequently sustained, abandoned, altered, invented, revived, extended, combined, and consumed a multitude of musical traditions and practices. These musical expressions were preserved in various ways, some recorded by folklorists and others on early commercial record labels. To assist in preserving these recordings NEH made a Humanities Collections and Reference Resources grant in 2016 to the University of Wisconsin–Madison to enhance access to a varied collection of audio materials from the Upper Midwest from the early to mid-20th century. Most of these materials are currently held by the Mills Music Library and Center for the Study of Upper Midwestern Cultures (CSUMC), where they support research on and teaching about the history and culture of ethnic communities in the Upper Midwest. 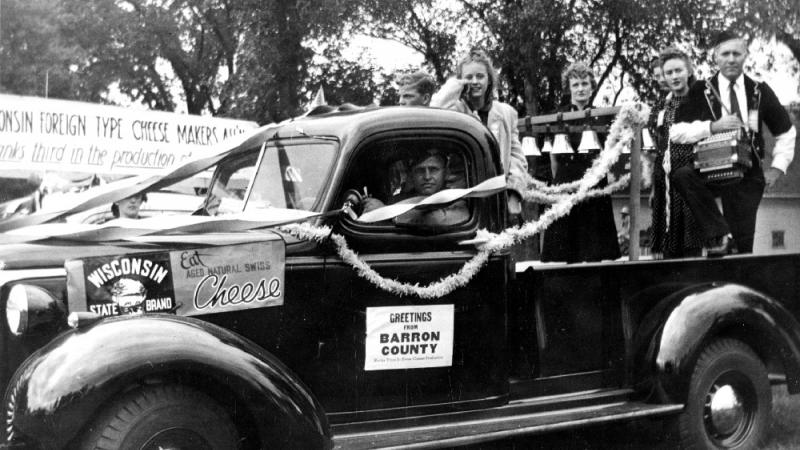 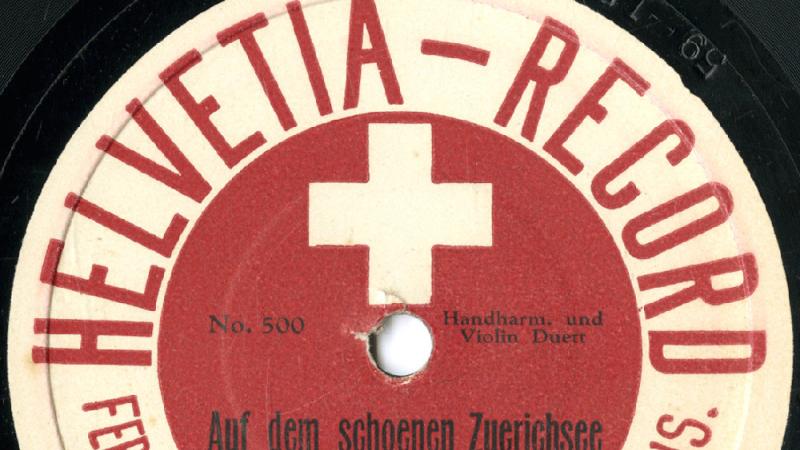 Made for the Swiss community, Otto Rindlisbacher of Rice Lake, Wisconsin, was among the U.S. and European musicians Helvetia recorded. This record label indicates the waltz “Auf dem schoenen Zuerichsee” played by Rindlisbacher and Karl Hoppe.

The ethnic records collection—the bulk of which includes over 20,000 microgroove audio recordings, also known as “78s”—represents the extensive “foreign series” catalogs recorded and marketed by many early recording companies; it  includes performances by Croatian, Finnish, German, Italian, Norwegian, Polish, Swedish, and other musicians and immigrant performers from the Upper Midwest. For example, the Norwegian-born Thorstein Skarning recorded many 78s in Chicago and New York following his immigration to the United States; renowned in Norway as well as the Upper Midwest, songs from Skarning’s recorded marches, waltzes, and schottisches remain in the repertory of musicians even today, including the hybrid “Norwegian Hillbilly” genre that he inspired. Otto Rindlisbacher of Rice Lake, Wisconsin, was steeped in the Swiss musical traditions of his immigrant parents, but nonetheless began performing a Scandinavian repertoire with Skarning around 1910. Skarning was the likely inspiration for Rindlisbacher’s trip to New York City in 1920 to “cut tracks” of Swiss music on the Helvetia label. You can hear a 1941 recording of Otto Rindlisbacher and his wife Iva performing “Swamper’s Revenge,” a lumberjack song, here. 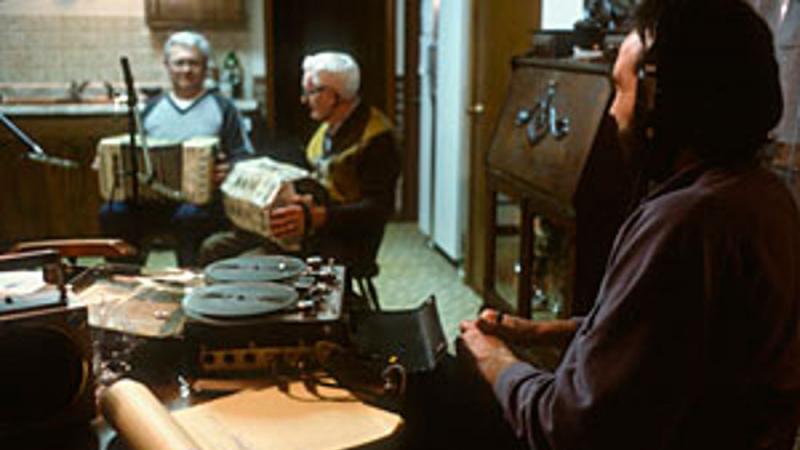 Irving and Robert DeWitz play concertina as Jim Leary records, 1985, Hustisford, Wisconsin. The reel-to-reel tapes created, and other endangered recordings, will be digitally preserved and accessible. 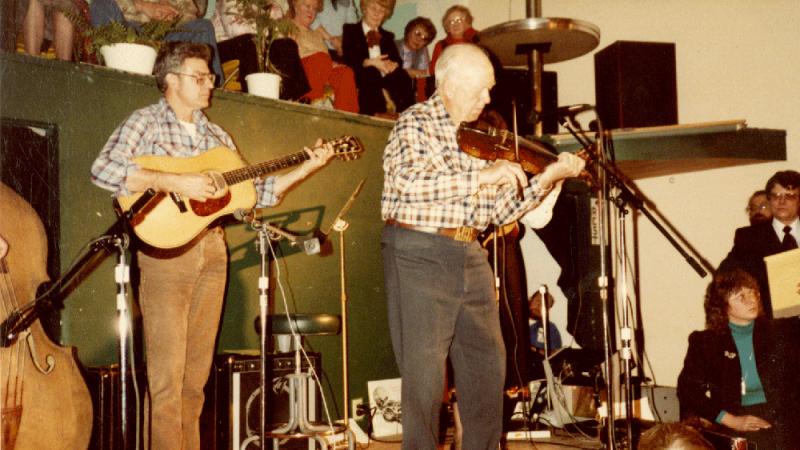 Leonard Finseth, folk fiddler from Wisconsin, with Lloyd LaPlant, guitarist and renowned luthier from Minnesota. Finseth’s collection will be digitally preserved and accessible.

Other examples from the University of Wisconsin’s collections include: recordings for the Wisconsin Chair Company (the label that later became Paramount Records) by Romy Gosz, a Czech-American trumpeter and bandleader; the performances of Hjalmar Peterson, a Swedish-born vaudevillian known by his stage name Olle i Skratthult (Olle from Laughtersville), whose comic ballad “Nikolina” sold 100,000 copies in the 1920s; the work of accordionist of Finnish heritage Viola Turpeinen, known as the “Finnish-American Accordion Princess,” whose songs and style were emulated by many in the region; and finally, the recordings of Walter “L’il Wally” Jagiello, a Polish-American polka musician who established the amplified, soulful sound of Chicago-style polka. Many of these performers recorded on local labels that remain difficult for researchers to find or access. In addition to musical recordings, the collection includes notable segments of “pastimes” (monologues, commentary, or readings), skits, comedy, and other spoken word materials that document popular culture of Germanic, Mediterranean, Scandinavian, and Slavic groups. The NEH-funded project will create streaming digital access to about 2,000 “sides”—that is, the entire audio content on both sides of 1,000 records. 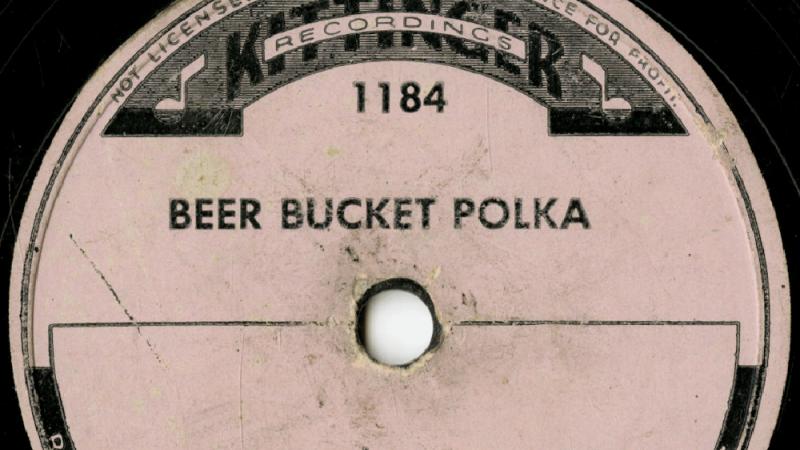 Brouchoud’s Orchestra performed in Manitowic and Sheboygan for over 25 years, starting out in the 1930s. 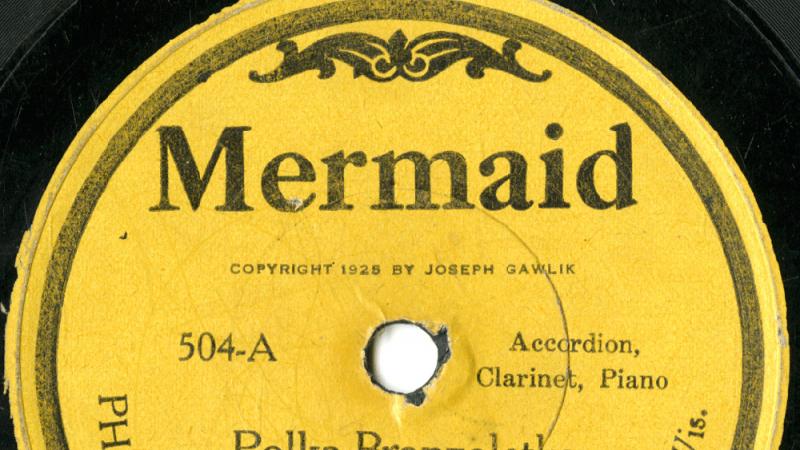 Label from a 78 recorded by a Polish trio in Milwaukee in the 1920s.

In addition to early commercial recordings, the collection at the University of Wisconsin includes field recordings of folklorists and anthropologists. In 1937, Sidney Robertson Cowell traveled throughout remote Northwoods communities in rural Wisconsin, lured initially by the prospect of finding “Kaintucks,” woodsmen who had followed the lumber industry up from Kentucky. She found and recorded much more of the region’s musical traditions, some available in the Folk Music of Wisconsin collection. Other collectors, such as music teacher and folklorist Helene Stratman-Thomas gathered material in the 1940s that now forms part of the Wisconsin Folksong Collection. For example, a 1946 recording of the Swedish vocal duet “Löftena de stä kvak,” recorded in Grantsburg, Wisconsin, can be heard here. Additional field materials that will be digitized with NEH support include items complementary to the commercial recordings, such as broadcast performances, interviews, field notes, and photographs dating from the 1950s to the 1990s, all of which shed further light on the communities and genres represented in the commercial recordings. All together, these materials document ethnic radio broadcasts, songs, instrumental music, and spoken word recordings from more than 25 cultural and linguistic groups in the Upper Midwest.

The label of this record shows one example of Serbians and Croatians recording tamburitza music in the Upper Midwest.