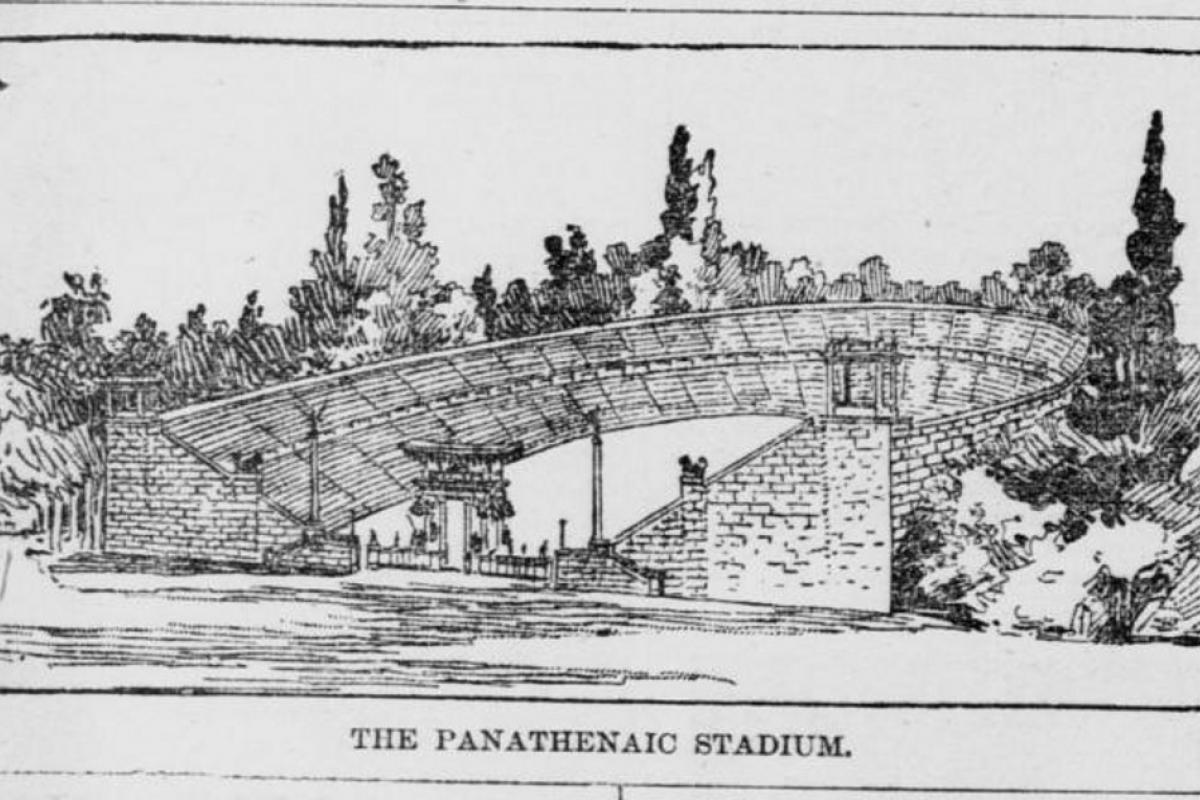 Robert Garrett, Jr.; Francis A. Lane; Albert C. Tyler; Herbert Jamison; Thomas E. Burke; Arthur Blake; Ellery H. Clark; I.P. Curtis.  These may not be household names like Michael Phelps, Carl Lewis, or Mary Lou Retton, but they happen to be some of the 14 athletes who represented the United States in the first modern Olympics held in Athens, Greece, in 1896.  Today, over a billion people from around the world are tuning in to cheer their nation’s top athletes competing in Rio at the Summer Games of the 31st Olympiad, in contrast to the Games’ comparatively modest beginnings over a century ago.

At Chronicling America –the free site joint-sponsored by the National Endowment for the Humanities and the Library of Congress – you can find first-hand journalistic reportage of the Olympics from among its nearly 5 million digitized pages of U.S. historical newspapers.  It is in this “first draft of history”  found in local and regional newspapers from across the country that we can discover the origins of the strange new international event.  Some journalists were skeptical of the seeming “farce”; others embraced it immediately as a reflection of an emerging international society.  While the size and scope of the Olympics may have drastically grown since then, we can nonetheless find the same competitive spirit, pageantry, and sporting events that constitute today’s global spectacle.

The first modern Olympic Games were established out of a desire to revive the tradition of athletic competition in ancient Greece that had been dormant for 1,500 years.  In June, 1894, a committee held under the auspices of the Union des Sociétés Françaises de Sports Athlétiques met in Paris, France, to discuss the possibility of producing a modernized version of the games.  The committee decided that the modern Olympics would be held every four years, like its ancestor, and be open only to amateur athletes.  A unanimous vote decided that the games would return to its birthplace in Athens, Greece, in 1896.  In the run-up to the event, one reporter from the St. Paul Daily Globe predicted that, “[N]ever in the history of the world has there been an athletic event so notable and comprehensive as this one will be." 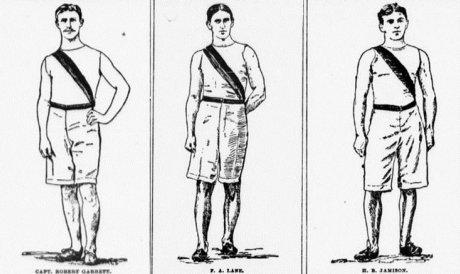 Sketches of America's first Olympians at the 1896 Athens Games.

Reports in Chronicling America indicate that despite the small cohort of athletes from 14 countries – 241, less than half of the American delegation for this year’s Summer Games – the two-week occasion garnered an enthusiastic following of spectators.  Like today’s Olympics, an opening ceremony celebrated the virtues of athleticism and friendly international competition.  The Panathenaic stadium, where the original games were supposedly held, was renovated in under twenty months by 600 workers.  80,000 spectators filled the stadium to capacity on opening day.  Greece’s royal family hosted the ceremony, which included a torchlight procession, representations of memorable scenes from Greek history, and performances from dramatic masterpieces beginning with a Sophoclean tragedy and ending with Wagner’s “Lohengrin.”  One reporter from The Wichita Daily Eagle described the “impressive” ceremony as “a gathering of truly Homeric proportions.”

The success of the opening ceremony overshadowed the very real concern that the Olympics might not even get off the ground.  Poor advertising, a short time period for nations to coordinate a team and program, and the prospect of a “trying trip by sea and land,” provoked some to wonder whether enough athletes would participate.  Indeed, two premier team events, cricket and football, were cancelled because no teams arrived.

In the end, 14 male athletes anchored by four from Princeton University and four from the Boston Athletic Association (women were not permitted to compete in the first games ) were selected to represent the United States to “annex as many golden wreaths as possible.”  One reporter from New York’s The Sun commented that the athletes were not necessarily the top athletes in their respective events:  "The primary fact is that Princeton University and the Boston A.A. are the only two organizations to step into the breach and endeavor to assert America's prestige in the most historic tournament of the age.”  Nevertheless, the American athletes made quite an impression, winning many of the events now part of track and field, including the 100 and 400 meter races; high jump; triple jump (referred to as the “hop-skip-and-jump”); pole vault; discus throw; and shot put (referred to as “putting the shot”). 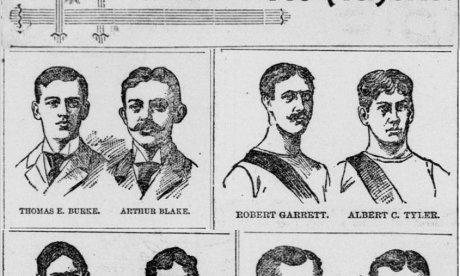 Thomas Burke, Arthur Blake, Robert Garrett, and other athletes were the first to represent the United States at the first Olympic Games in 1896.

Other sports held for the first Games included: “gymnastic sports” which included “individual exhibitions, exhibitions on the rings, parallel bars, horse leaping and team work”; fencing; wrestling; shooting with army rifles, carbines, and pistols; “aquatics” which included sailing events, rowing, and three swimming races at 100, 500, and 1,000 meters; bicycle races; lawn tennis (single and double); and weight lifting with one and two hands.  The Olympics concluded with the “star event”: a 30-mile footrace from the city of Marathon to the stadium in Athens that recreated the legendary historic run by the Greek soldier Pheidippides.

Perhaps more interesting than the events themselves, however, was the unusual training regimen the athletes endured on the long journey by ship to Greece, recounted in The Sun:  “Curtis, Burke, and Clark practised [sic] starting [races], and Blake devoted himself to skipping the rope and running up and down stairs, while Hoyt took to strengthening his arms by lifting himself from the deck to the rigging.”  The improvisational training must have paid off.  The Americans’ dominant performance garnered reluctant praise from Germans who proclaimed them the “foremost sportsmen of the world.”

The two-week event closed just as it had opened -- in celebration of the modern competitive spirit and international camaraderie.  King George of Greece hosted a banquet for the athletes and organizers, and his words, reprinted in The New York Tribune, still ring true today:  "Let me express the pleasure that all feel in seeing you come here to take part in the Olympic games.  Your reception shows how the Greek people rejoiced to receive you.  I seize this occasion to extend my warmest congratulations to the victors… Keep us close in your remembrance and do not forget the enthusiastic welcome we have given you."

The following articles are a sampling of coverage of the 1896 Olympic Games found in Chronicling America.  You can conduct your own search for "Olympics" to learn more about these Games as well as subsequent Games through 1920.  To maximize your search results, try limiting the date range in the "Advanced Search" to correspond with those for each Olympics.