This article is the third in a series about the history of the ethnic and foreign language content of Chronicling America, a database of historic American newspapers from 1836 to 1922 supported by NEH and the Library of Congress.  The first and second articles in the series featured historic German- and Spanish-language newspapers.  Future articles will feature newspapers in French and those written for African American, American Indian, and Jewish communities.

Anti-government sentiment and violence loom large in the United States today, but many Americans have never heard of the radicals who sought to overthrow the government using violent means a century ago.  At the center of this movement was the Italian-born anarchist Luigi Galleani (1861-1931).  In the years surrounding the First World War, Galleani’s followers, who were called “Galleanisti” and included the notorious radicals Nicola Sacco and Bartolomeo Vanzetti, advocated the violent overthrow of government institutions.  Some also carried out bombings and assassination attempts, leading to heightened government surveillance and widespread repression of civil liberties.  Galleani’s Cronaca Sovversiva (“Subversive Chronicle”), a key Italian-language periodical in the history of anarchism, is now available on the  NEH and the Library of Congress’s online newspaper Web site Chronicling America.  Galleani published 773 issues of the newspaper before the United States government forced it to shutter in 1918, deporting him the next year.  Galleani published several more issues from Turin, Italy, before the paper was suppressed by Italian authorities.  Cronaca’s pages illuminate an important chapter in the history of radicalism, violence, terrorism, immigration, and government surveillance in the United States. 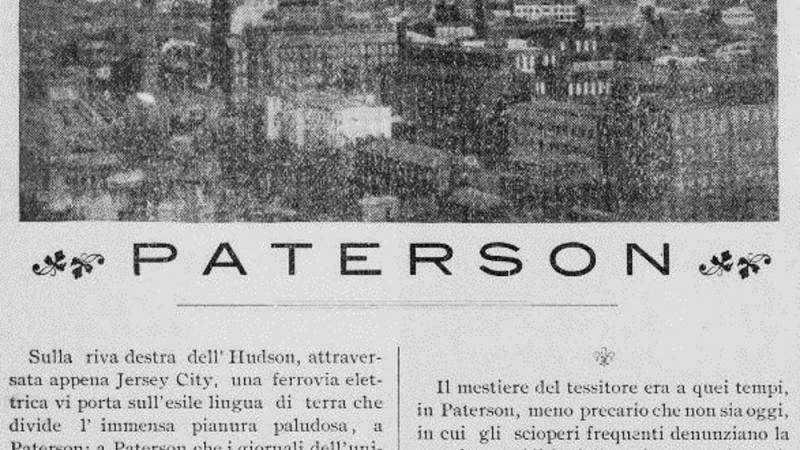 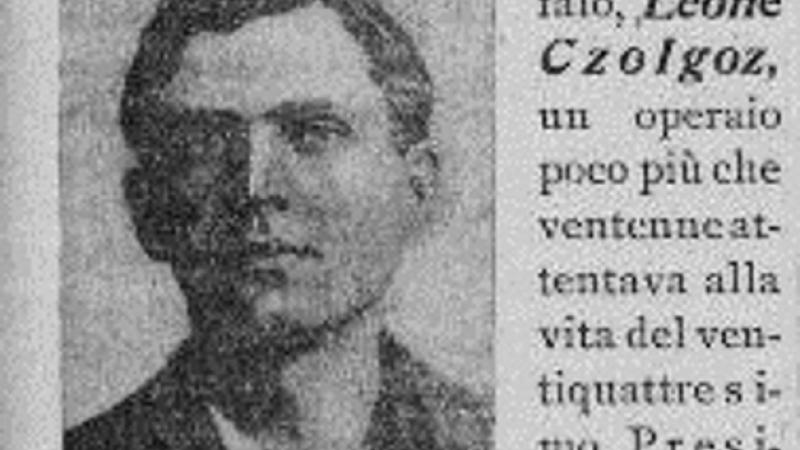 Chronicling America is a freely accessible Web site providing information about and access to historic United States newspapers published between 1836 and 1922.  To date, over 10 million pages representing 39 states, 1 territory, and the District of Columbia are available on the site.  Chronicling America is produced through the National Digital Newspaper Program, a partnership between the National Endowment for the Humanities, the Library of Congress, and state projects.  NEH awards enable states to select and digitize newspapers that represent their historical, cultural, and geographic diversity, and to contribute essays containing background information about each newspaper and its historical context.  The Library of Congress unifies all content provided by states and permanently maintains the digital information.  Chronicling America is freely available on the internet.  Users may search the millions of digitized pages contributed by state projects and the Library of Congress and consult a national newspaper directory to identify newspaper titles available in all types of formats.  This effort ensures that users will continue to have access to this historical record even as technology changes.

Early 20th-century editors used their newspapers to espouse their views much more than those today, and Cronaca Sovversiva was no exception.  Its creator, Luigi Galleani, was a lawyer, journalist, and radical born in Italy.  He was imprisoned several times in Europe for leading strikes and demonstrations for workers’ rights, fleeing from Italy to France to Egypt and London before arriving in Paterson, New Jersey, in late 1901.  In Paterson, a hotbed of Italian anarchism, Galleani led a strike of silk workers in mid-1902, and was shot in the face in the process.  Arrested and indicted for inciting a riot, he fled to Canada before his case went to trial.[1]  Returning to the United States under the assumed name of Luigi Pimpino, Galleani settled just over the Canadian border in Barre, Vermont.[2]

From Barre, Galleani stirred an already active anarchist movement fed by a large influx of Italian immigrants to America between 1880 and 1920.  Some of these “new immigrants” arrived already holding anarchist beliefs; others were unskilled workers who were disappointed by their experiences in the United States and embraced Galleani’s radical views.  Galleani rejected all forms of organization; he saw government as a menace, and thought that even labor unions would eventually become corrupt.  Calling for “propaganda of the deed,” he advocated the overthrow of capitalism via armed retaliation.[3]

Launched on June 6, 1903,  in Barre, Vermont, Cronaca Sovversiva ran stories praising radical socialists associated with  the Paris Commune as well as terrorists like Leon Czolgosz (an American anarchist who assassinated President McKinley in 1901) and Gaetano Bresci (an Italian American anarchist who assassinated King Umberto I of Italy), as well as providing continuing coverage of labor actions like those in Paterson, New Jersey.  The Cronaca also advertised Galleani’s “La Salute e in Voi,” a bomb-making manual published in 1905 whose title translates to “Health is in You!”  Selling for 25 cents, the manual instructed users in the use of explosives to further the anarchist cause. Beginning in 1912, the Cronaca Sovversiva relocated to Lynn, Massachusetts. It was published in Washington, DC, in 1919, and its final issue appeared in Turin, Italy, the following year. 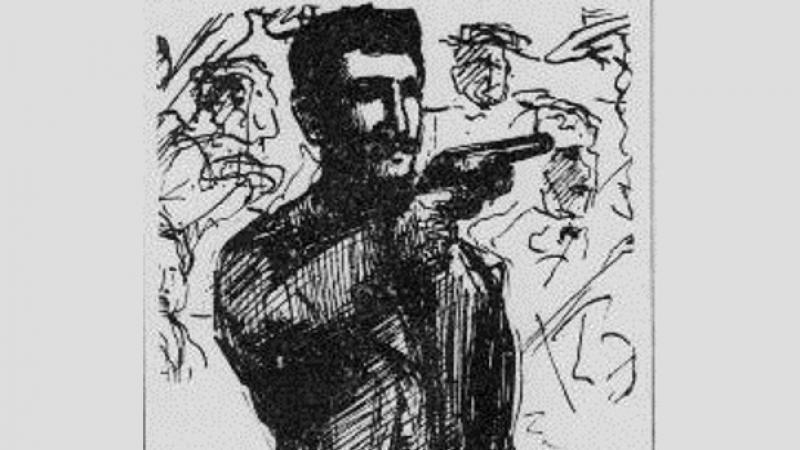 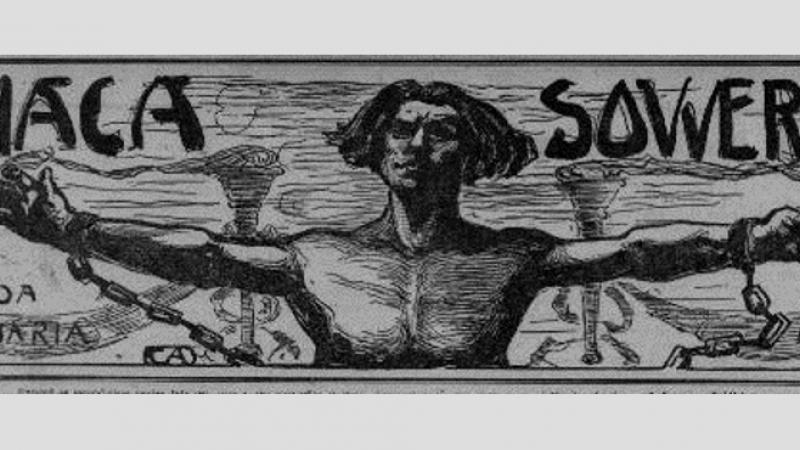 The Labor of Art

Many of Galleani’s followers were immigrants—workmen and laborers in industrial centers in the Northeast—and Cronaca sought to connect with this audience visually as well as ideologically.  With its elaborate mastheads and artistic portraits of anarchists and statesmen, the newspaper’s illustrations contained a frenetic energy.  Most of the artwork was produced by artist and propagandist Carlo Abate.  As one scholar has suggested, with his techniques for woodcuts and line drawings, Abate sought to emphasize the artist’s hand and the labor involved in producing culture.  Rather than simply reproducing scenes or people, Abate reacted against the mechanization of photography and brought emotion and labor into his work, so that the effort that went into producing it could not be easily ignored.[4]  This ideology is evident in Cronaca’s mastheads, as well as artwork depicting May Day, the anarchist struggle, social conflict, and individuals such as the Catalan anarchist Francisco Ferrer. 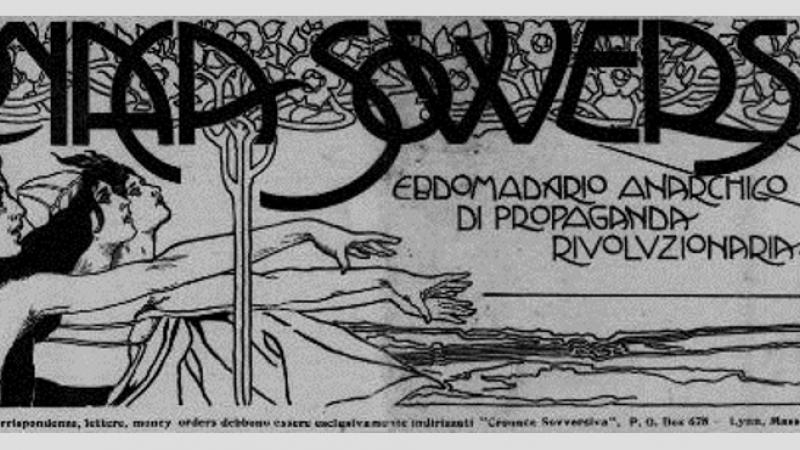 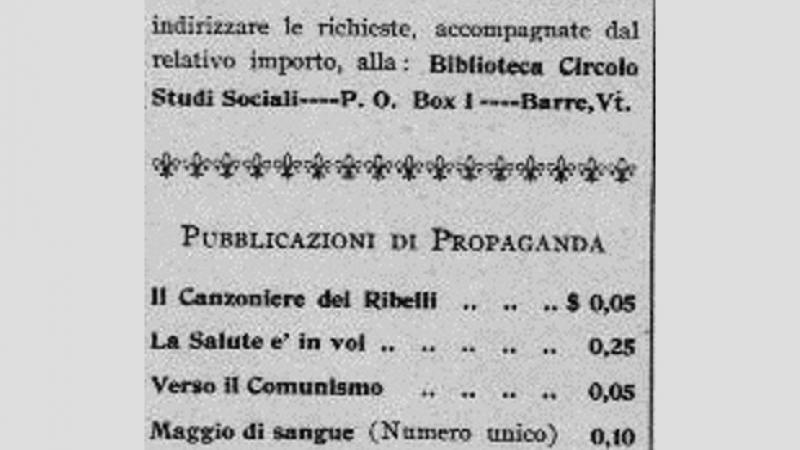 After a political opponent gave Galleani away in 1906, the sheriff and his deputies came for him, leading hundreds to protest his arrest.  Although he was extradited to New Jersey in 1907 to stand trial for his role in the Patterson strike, a hung jury allowed him to return to Barre.[5]  Galleanisti put the bomb-making information contained in “La Salute e in Voi” to use beginning in 1914.  Motivated by their general opposition to capitalism and government as well as the United States’ entry into the First World War, anarchists plotted bombings in New York and Boston.  The postal service banned Cronaca Sovversiva from mail distribution in 1917, but adherents to Galleani’s views continued to distribute it around the country.  The Bureau of Investigation, predecessor to the FBI, raided the newspaper’s headquarters in Lynn, Massachusetts, repeatedly, confiscating names and addresses of anarchists numbering in the thousands.[6]

A federal agent later described the periodical as “the most rabid, seditious and anarchistic sheet ever published in this country.”  In 1917, Galleani urged his followers to go to Mexico to avoid conscription, which attracted further notice from the authorities.[7]  After another wave of bombings and attempted bombings in 1917 and 1918, the Bureau of Investigation raided the offices of the Cronaca in 1918 and arrested its editors.  A 1919 package bomb delivered to the door of Attorney General Palmer, among many bombs planted in several cities, was attributed to Galleanists.  In reaction, the United States Department of Justice staged the Palmer Raids, aimed at capturing, arresting, and deporting anarchists and other radical leftists.

Galleani was finally deported in June 1919 for publishing his bomb-making manual and advocating the overthrow of the United States government.  After his departure, Galleanists perpetrated the September 1920 bombing on Wall Street which killed 38 and wounded several hundred persons.  Galleani and his followers were central figures in the First Red Scare in the United States, which centered on fear not only of Communism but also of radical leftism.

Like so many 19th- and early 20th-century newspapers, Cronaca Sovversiva was a direct representation of its editor.  Take a look at the newspaper for yourself by searching in Chronicling America.  You can use the Advanced Search tool to narrow your search to this publication to read stories about this incendiary and complex moment in American history.  You can also compare how events and personalities were covered in Cronaca Sovversiva and the English-language press. 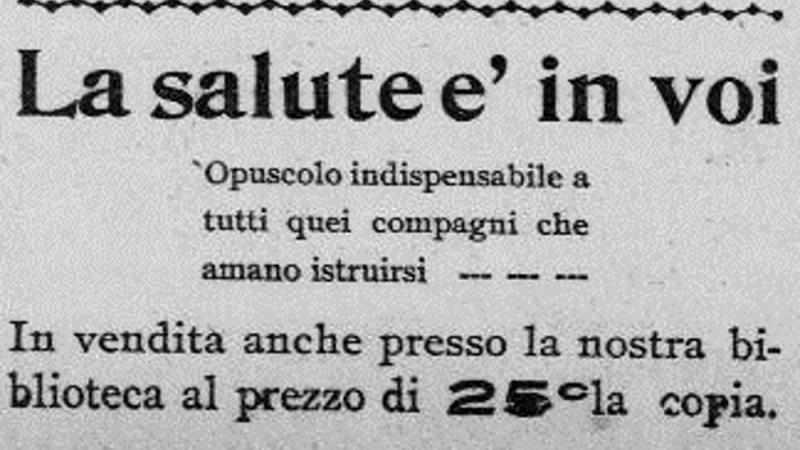 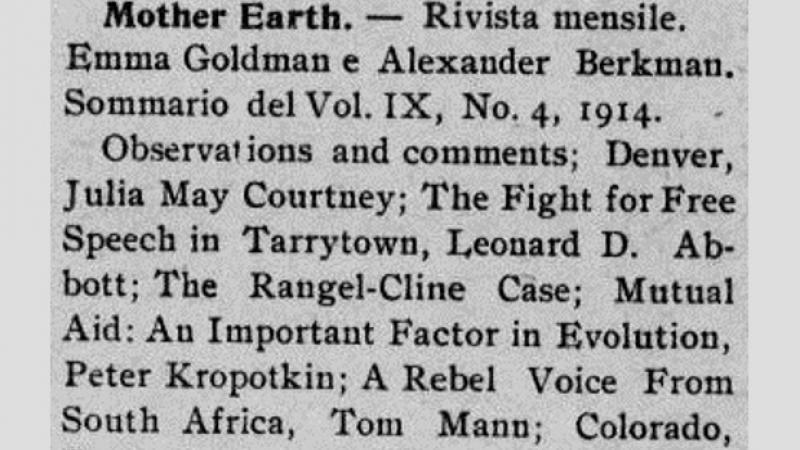 Chronicling America will now accept submissions in virtually any language.  Look out for contributions in other languages soon!

[4] Andrew D. Hoyt, “The Inky Protest of an Anarchist Printmaker: Carlo Abate’s Newspaper Illustrations and the Artist’s Hand in the Age of Mechanical Reproduction,” in James Baughman, Jennifer Ratner-Rosenhagen, and James P. Danky, eds., Essays on Print and the Culture of Dissent Since 1865 (Madison: The University of Wisconsin Press, 2015).

[5] “Luigi Galleani and the Anarchists of Barre,” in The Barre Montpelier Times Argus April 30, 2010.