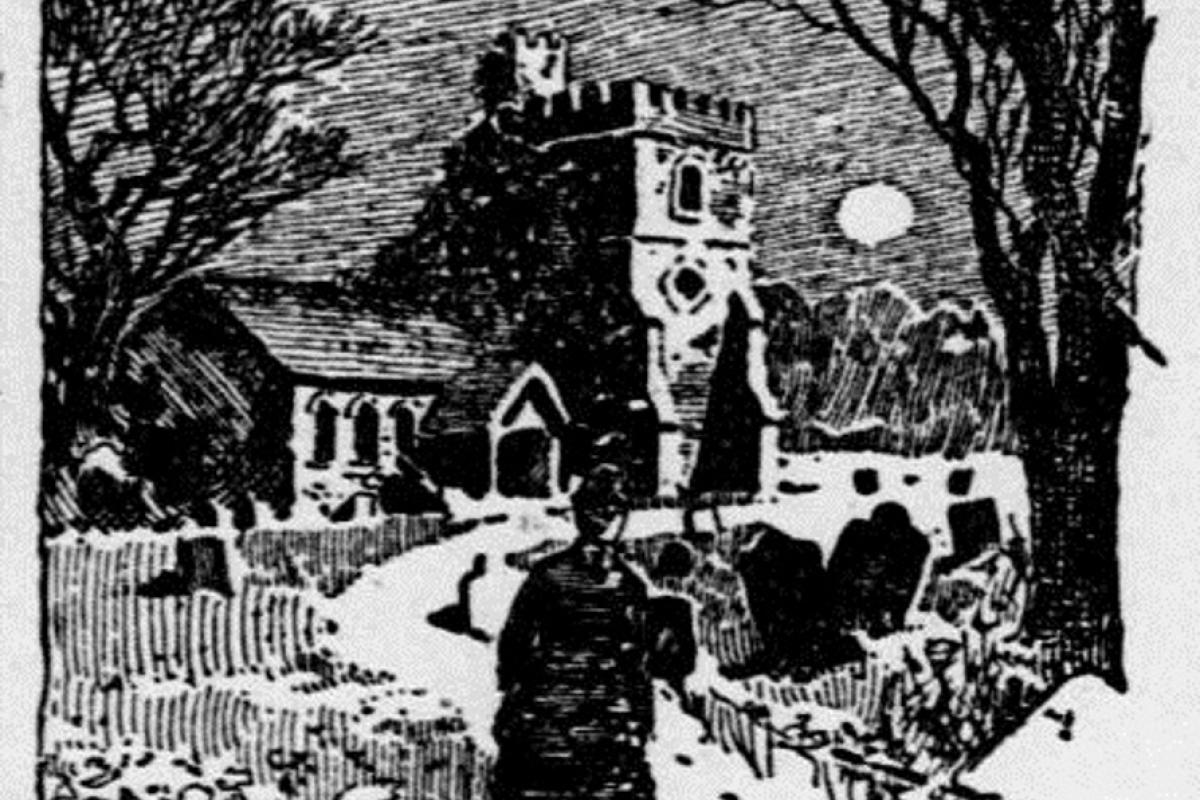 It’s time for spirits, fairies, ghosts, and ghouls!  Halloween originated in the ancient Celtic festival of the dead Samhain (“summer’s end”) and later Christian celebrations of martyrs and saints (“All Saints Day” or “All Hallows”).[1]  These festivals involved commemoration of the dead and celebration of the final harvest of the year.[2]  The historic newspapers in Chronicling America show that in the 19th and early 20th centuries Americans both disparaged and delighted in, and ultimately borrowed from, old world traditions involving the supernatural, divination, and trickery.

Chronicling America is a freely accessible web site providing information about and access to historic United States newspapers published between 1690 and 1963.  To date, 11.3 million pages representing 39 states and one territory and the District of Columbia are available on the site, with more being added all the time.  Chronicling America is produced through the National Digital Newspaper Program, a partnership between the National Endowment for the Humanities, the Library of Congress, and state projects.  NEH awards enable states to select and digitize newspapers that represent their historical, cultural, and geographic diversity, and to contribute essays containing background information about each newspaper and its historical context.  The Library of Congress unifies all content provided by states and permanently maintains the digital information.  Chronicling America is freely available on the internet, and users may search the millions of digitized pages and consult a national newspaper directory to identify newspaper titles available in all types of formats. 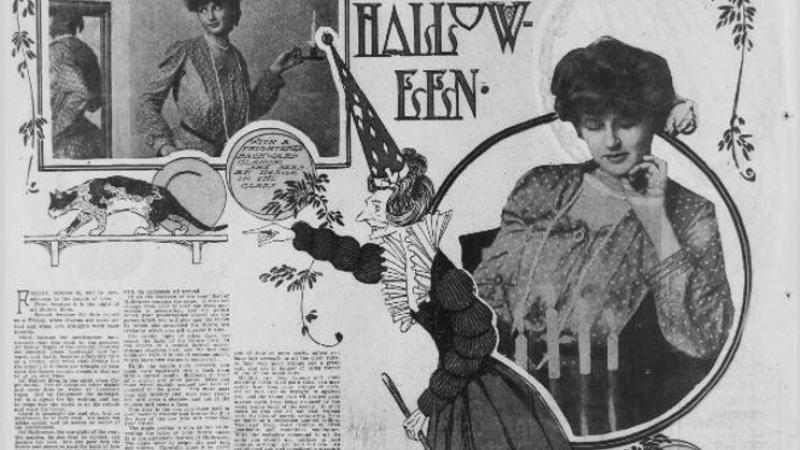 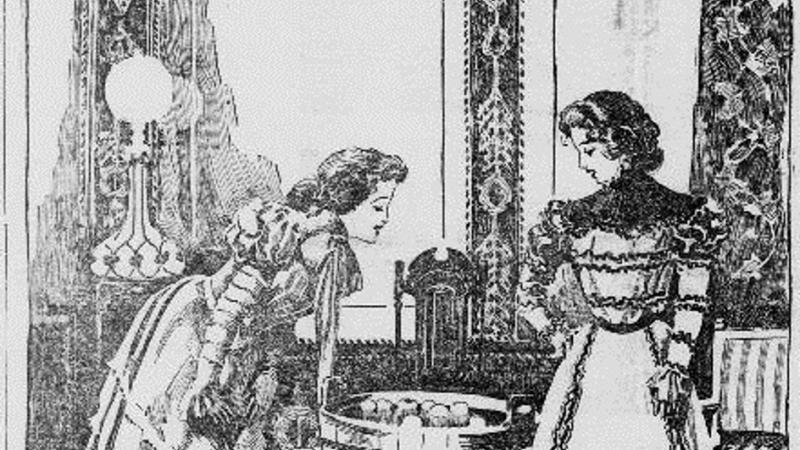 Halloween had a rich history of practices in Europe, especially England, Scotland, and Ireland.  Until the mid-19th century, however, many Americans dismissed Halloween traditions as old-country superstition.  In 1863, a newspaper in Ebensburg, Pennsylvania declared that at one time in Europe, whole communities believed in “witches, fairies, elves, and goblins of high and low degree.”  In this more enlightened era in America, with the benefit of Common Schools, however, these sort of superstitions were “about played out at the present juncture.  Their day is past, to return no more forever.”  This is not to say that Halloween was forgotten entirely in the United States, however.  An 1866 article from the Evening Telegraph in Philadelphia explained that Halloween had made its way to the United States in the form of mischief like “hanging dead cats to door-bells” and “passing through the streets late at night and arousing people…by thumping boisterously on their doors with cabbage stalks.”  A report on Halloween activities from  Baton Rouge, Louisiana, in 1867 described more benign “games with nuts and apples” serving “the double purpose of contributing to the gratification of the palate and the pleasing superstitions of the mind.”

Many 19th-century American newspapers discussed and then quickly disavowed Halloween superstitions.  Oddly, cabbages figured heavily in both pranks and divinations.  As a news story from Ironton, Montana, in 1888 wryly noted, “just what occult power a cabbage possesses has never been defined; but certain it is that these innocuous plants usually have a rough time of it on Halloween.”  The newspaper then described a Halloween pastime in which a young woman would pull up a cabbage; if it pulled much earth up on its roots, she took it as a sign that she would be married to a wealthy man within a year.  An 1895 story from the Hawaiian Gazette explained that Halloween was rarely celebrated in the United States (only by young boys, who knew it as “Cabbage night”).  The paper then, however, gleefully detailed the many ways nuts, cabbages, and apples had been used to reveal a future spouse’s face in the old country.  “Especially sacred is this occasion to lovers,” declared a St. Paul, Minnesota, newspaper in 1897, “and the spirits are especially obedient to their behests.”  The holiday was more popular in the British Isles than the United States, the paper stated, before detailing customs “of superstitious origin and rather doubtful antiquity.”  Stories that cheerfully recounted old world Halloween diversions, cabbage-related and otherwise, commonly appeared in newspapers of the period, as were disclaimers that such entertainments were not well-known in the United States. 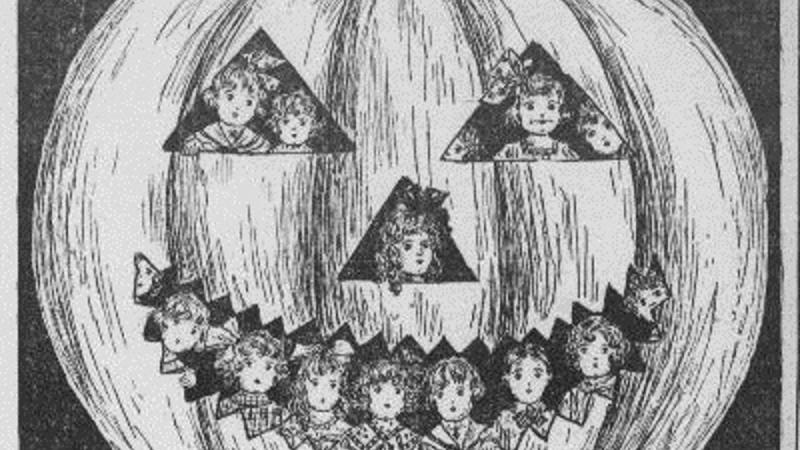 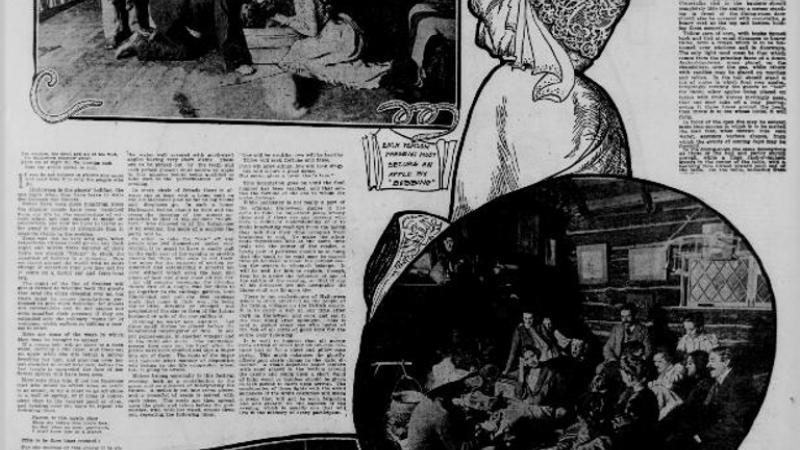 In addition to discussions of superstition, Halloween parties and pranks thrived from East to West.  Another report from Ironton, Montana, noted that “lads” could be counted upon to organize cabbage-throwing brigades, switch the undertaker’s sign board to the doctor’s office, and put a stuffed donkey at a professor’s desk or a preacher’s pulpit.  “Lifting and lugging of gates” from one property to another was also a common trick, according to the same piece from the Honolulu newspaper.  A typical Halloween party in  Minnesota, included “numberless practical jokes,” and the society pages of the St. Paul Daily Globe described gatherings with cards and dancing—even advertising a “Halloween donkey party” (without further explanation).  In the Idaho Territory, Halloween was occasion for a ball in 1887.  Bobbing for apples was common, according to a story from San Francisco in 1900, as was a “candy pull,” described in the St. Louis Republic in 1902, in which party guests competed to grab apples or candy suspended from the ceiling with their teeth to show who would have a successful year.  Readers of the Los Angeles Herald  were advised about the many decorations, dances, and dishes to prepare, including “a Halloween cake iced with chocolate icing and containing the magic ring, thimble, button and bit of money.”  The same newspaper, however, described “old-time Halloween rites” as well, including mirror gazing, burning of chestnuts, apple paring, and carrying the candle.  Most of these activities involved young women attempting to divine their future husbands or arrange marriages.

Blowing Out the Candles on Halloween at the East Side Settlement Home. New-York Tribune. (New York, New York) October 29, 1905.

In fact, stories about Halloween divinations and superstitions increased at the beginning of the 20th century, with most seemingly devoted to divining future marriages.  In 1902, the San Francisco Call predicted that the impending Halloween was bound to be especially powerful because “charms are more potent and…love draughts work most intently” on Friday nights.  At a party in New York’s East Side Settlement House in 1905, young women blew out lines of candles, with the idea that the flames that remained lit signified the number of years remaining “unhitched to that amiable runabout called man.”  In 1915, a Halloween story that appeared in a newspaper in Ogden, Utah detailed myriad ways for young women to determine whom they would marry, “unique tests of the charms of this celebrated night.”  For example, a woman would go into a dark room with a candle, alone, and eat an apple in front of a mirror; the face of her future husband would appear in the mirror over her shoulder.  Other methods for discovering one’s future partner, according to Washington, D.C.’s Evening Star, included carefully paring an apple and whirling the peel backward, where it would form the first letter of a sweetheart’s name.  A young woman could also throw out the window the end of a ball of yarn, watching it unroll while repeating the Lord’s Prayer, at which point she would be rewarded by the sight of her future husband.

By far the most common Halloween divinations involved nuts or chestnuts.  In 1919, young women in Bisbee, Arizona, were encouraged to build a “ghost fire” to find out whom they were destined to wed.  Chestnuts thrown into the fire would pop, and the girl’s whose went first would see her future husband’s face rise up from the flames.  In fact, the Ogden Standard’s  “Suggestions for Celebrating the Night When Ghosts Walk” explained that Halloween was known in England as “Nut crack night” because of the common custom of placing two nuts in the stove—one for the woman and one for her mate.  If the man’s jumped or cracked, he would prove fickle, but if the two nuts “cuddle up to each other and burn brightly,” the couple would marry and live happily ever after.  The article also described a more “up-to-date” Halloween test, in which blindfolded women would pick from hanging ribbons colored to represent the colleges; the colors of the ribbon picked would indicate the alma mater of her husband-to-be.

Along with these bygone practices, Halloween in the United States has always included some elements still seen today involving children, candy, and costumes.  The Los Angeles Herald featured letters from children about their Halloween pranks and a drawing contest, such as this spread from 1910.  This 1920 advertisement in the New York Evening World suggested buying nougatines, chocolate covered goblin faces, and spiced jelly gums for the holiday.  While wearing costumes and going door-to-door did not become popular again until later in the century, children and adults in 1917 Washington, D.C., wore costumes and masks; fake moustaches were especially popular.  And a paper from Fairmont, West Virginia, asked “Why not a fancy paper dress party this Halloween with masks off before a court of witches at midnight?”

All in all, for much of American history, people found plenty to do on Halloween!  Find out more about historic Halloween superstitions and celebrations in your neck of the woods by searching Chronicling America for “Halloween,” “All Hallows Eve,” or “All Saints Day.”  Using the Advanced Search, you can search for celebrations in your state or for a specific year.  See also the Library of Congress’s Topics in Chronicling America page for more search tips and suggested articles.

Would You Know Whom You Are Destined To Wed—Build a Ghost Fire Hallowe’en. Bisbee Daily Review. (Bisbee, Arizona) October 31, 1919.