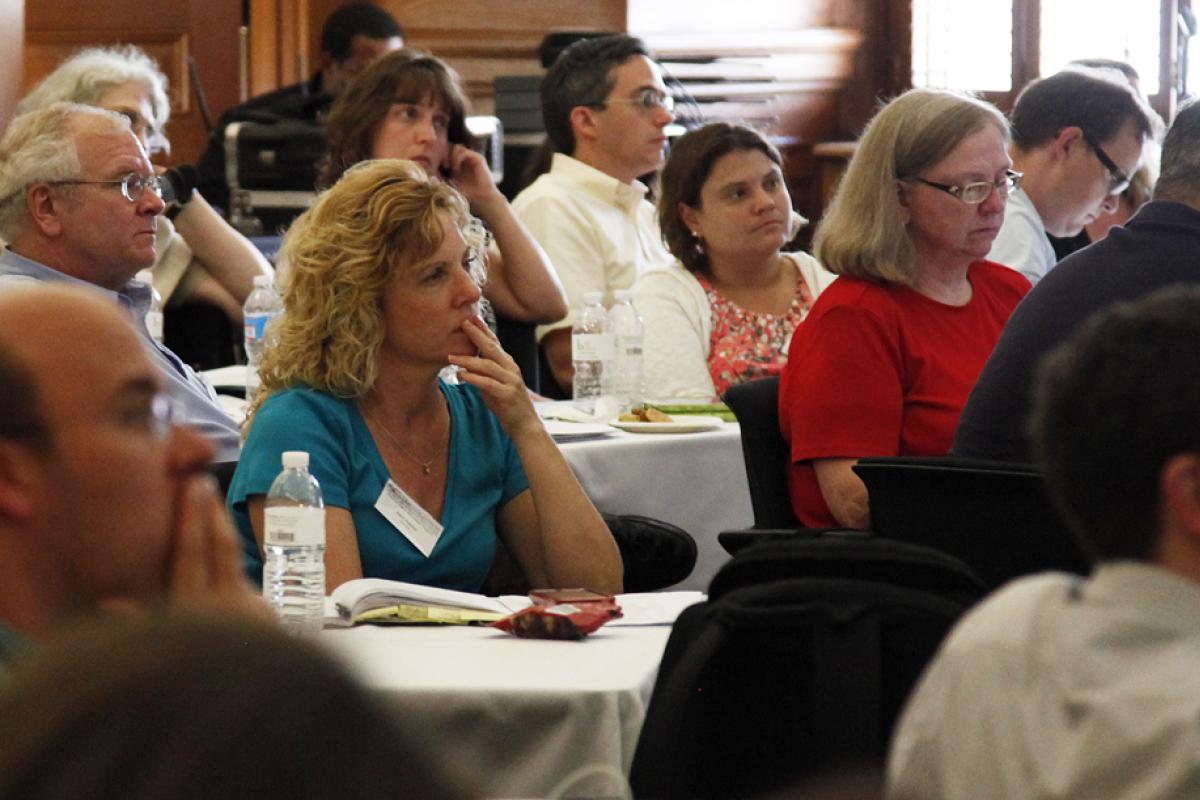 Digging into old newspapers can reveal a wealth of information about historical events, changing attitudes and ideas, and individuals—everything from the Civil War to Texas border disputes, local African American newspaper publishing, Chicago’s Spanish Flu epidemic of 1918, and even long-lost relatives.  Since 2005, the National Digital Newspaper Program, a partnership between NEH and the Library of Congress, has sought to bring historic newspapers to the public by creating a national, searchable database of newspapers published in the United States and Territories between 1836 and 1922.  The project’s Chronicling America site currently offers anyone with an internet connection access to over 6 million pages—and we are adding new papers every month!

State partners from libraries, archives, and historical societies across the country do the work of digitizing and submitting the papers, and each fall, representatives from these state projects meet in Washington, DC.  After this year’s Annual Meeting, we asked staff from several of the project’s 36 state partners—Missouri, Florida, Texas, and Minnesota—to discuss their experiences, what they’ve learned, and what has surprised them so far.

The Mosaic of American History

The newspapers in Chronicling America reveal the distinctive histories of states and territories at the same time as they paint a national picture.  Historians, professors, librarians, newspaper professionals, and other experts select newspapers for digitization in each state with an eye toward understanding the texture of each state’s history.  Gerald Hirsch of the State Historical Society of Missouri reported that the Missouri Digital Newspaper Project’s newspapers represent the diverse regions of the state: urban areas, rural agricultural regions, the Ozark Mountains in the southwest, and the southeast region more closely affiliated with the South, as well as immigration and commerce along the Missouri and Mississippi Rivers.  Similarly, Patrick Reakes of the University of Florida explained that, in a recently-established partnership between his state and Puerto Rico, the state and territory would seek to focus on a mix of metropolitan and rural papers.  And, in a state with as much movement of peoples as Texas, Cathy Hartman of the University of North Texas noted that her state’s project sought newspapers representing cities and coastal zones, migration, transportation, shipping, population shifts, and cultural movement across early Texas.

Participants agreed that the newspapers in Chronicling America move beyond state and local history, offering perspectives on national history.  In Texas, for example, Hartman reflected that newspapers from the Rio Grande Valley area offer evidence about the various Texas border conflicts that took place at the turn of the 20th century—disputes which resonate today.  Florida’s new partnership with Puerto Rico will, says Reakes, “provide a unique opportunity to compare/contrast the coverage of historical events from both the Puerto Rican perspective and the view from Florida.”  And in Minnesota, Jane Wong noted that newspapers document local issues with national inflection—from the territorial days and early statehood to the Civil War, new immigrant communities, and the growth of railroad towns and the Twin Cities.  Minnesota included newspapers from Ojibwe tribe, African American communities, the Grange, labor and women editors, and representative publications from all political viewpoints. 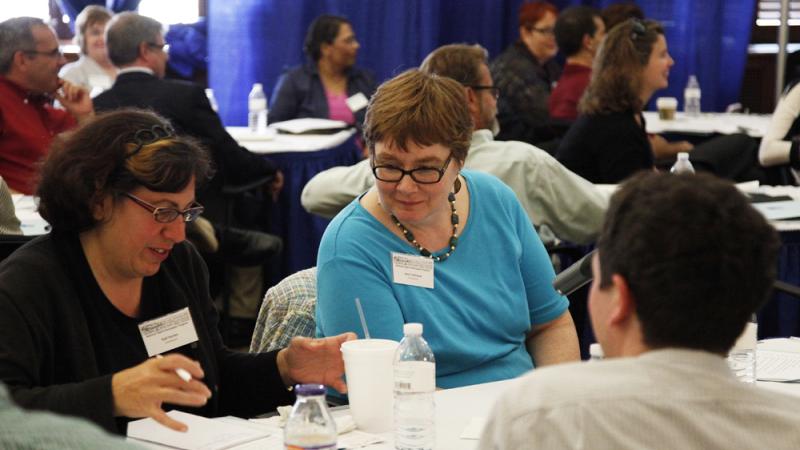 Jane Cullinane and Gail Hurley of the Connecticut State Library 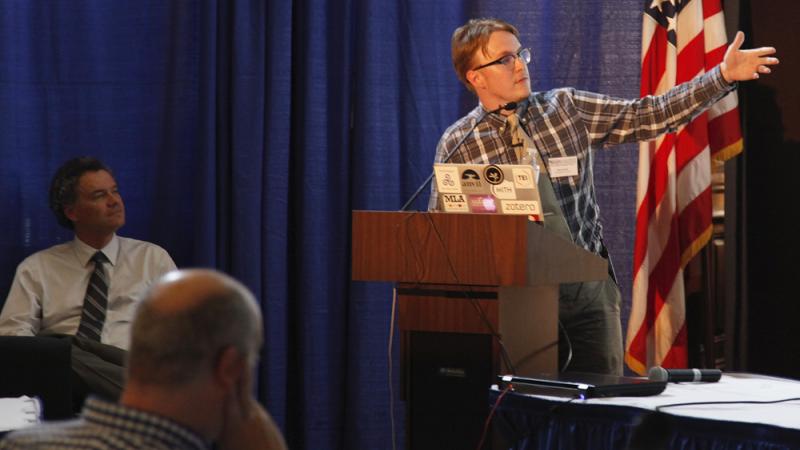 Exploring the Nation at Ground Level

Directors of newspaper projects indicated that there are many surprises in store for users of the nation’s historic newspapers.  Florida’s Patrick Reakes indicated that the newspapers were by turns funny, quirky, strange, and tragic.  Missouri’s Gerald Hirsch discussed the power of digital newspapers in making the “lost” history of communities and regions accessible, extending well beyond what is found in textbooks—the “development of towns, of local politics, and of individuals as they struggle with local issues and react to national and international events.”

One challenge in dealing with newspapers from all over the country is that not all of them were published in English.  The Library of Congress has now added the capability of digitizing newspapers in nine languages (with more to come), and states are taking advantage of this new functionality.  Missouri, for example, is feeding a reignited interest in its German heritage, especially along the Missouri River between St. Louis and the center of the state; Minnesota is also adding German newspapers, and assisting with such publications from both Iowa and North Dakota.  Florida’s collaboration with Puerto Rico, perhaps unsurprisingly, has a higher percentage of foreign-language materials than any previous project—50% of the pages to be digitized are in Spanish.  Texas, similarly, has worked with New Mexico to ensure that its Spanish newspapers are correctly scanned and searchable.

The newspapers in Chronicling America have seen many uses, project directors reported—some of them surprising even to those who posted the papers.  For example, Reakes reported that Florida’s newspapers have been used to track the spread of contagious diseases across the country or the state.  People also learn about themselves: Hirsch, of Missouri, reflected that the first search researchers usually conduct is their own last name—sometimes with interesting results.  Dan Gelatt, who assists the Minnesota Historical Society in digitizing state newspapers, found information on his great uncle moving across the upper Midwest from Missouri to Minnesota, Michigan, Kentucky, and Wisconsin, including the story (reprinted in at least seven papers from Wichita to New York) of his falling in love with a Jewish woman and conversion to Judaism.  Full-text searching, pointed out Missouri’s Hirsch, allows users to locate family members and place them in context, rather than just visiting a vital records listing.  Researchers in Minnesota were also able, according to Wong, to investigate a grave stone in Wisconsin reading simply “Some Mother’s Boy,” finding the name and family of the man buried there.

Project directors pointed to the wealth of information found across newspapers not only for individual stories, but also to indicate broader trends.  Gerald Hirsch, for example, pointed to the creation of Missouri’s “This Day in History” Civil-War themed newspaper articles, the subjects of which are now being turned into a book.  Minnesota scholars, according to Jane Wong, have used advertisements in the newspapers to track social and cultural trends.  In Texas, reports Cathy Hartman, researchers have used 19th-century newspapers to study voting practices, particularly after the Civil War, as well as migration to and movement across Texas in the time when the port of Galveston was the state’s main entry point for immigrants.  For a flavorful turn, a researcher is even using Chronicling America to compile early 20th-century Texas recipes!

The National Digital Newspaper Program encourages new states to learn from those that have participated in the program before, either by way of formal partnerships or through informal consultations.  The Annual Meeting provided an opportunity for participants to share their experiences with one another.  These partnerships allow more newspapers to be digitized, but also reflect the realities of U.S. history.  “History,” Jane Wong pointed out “doesn’t stop at the border,” and families and businesses in Minnesota have connections in Iowa and North Dakota (the state’s current partners) and throughout the region.  Similarly, Florida’s collaboration with Puerto Rico, observed Patrick Reakes, allows for a fuller picture of the Caribbean basin and sheds light on historical events in the region.  The same, according to Cathy Hartman, goes for Texas’s collaboration with Oklahoma and New Mexico, as well as her advice and support for Louisiana and Alabama as they forged their own partnership.

Partners are also realistic about the future—noting that not all newspapers will be digitized by the National Digital Newspaper Program.  State partners are attempting to connect Chronicling America with other state resources, such as the Texas Digital Newspaper Program’s collection on The Portal to Texas History.  All the partners agreed, however, that the National Digital Newspaper program gave them the means to begin digitizing and making available state newspapers.  Missouri’s Gerald Hirsch stated that NDNP “provided the seed needed for the growth of newspaper digitization,” stating that the state will continue to digitize according to the same standards.  Jane Wong, similarly, credits the NDNP program with both launching and providing a strong foundation for the digitizing effort, which she says the Minnesota Historical Society intends to continue.  Patrick Reakes hopes for continued expanded access, publicity, and outreach for Florida newspapers, and Cathy Hartman credits NDNP with getting Texas' newspaper digitization program successfully launched and hopes to grow it.